The giant betta is one of many species of betta fish. It is the largest variety of betta and is the result of selective breeding.

The giant Betta is a magnificent fish with dazzling colors. It is popular with many fish-keeping enthusiasts because of its unusually colorful appearance. The giant betta is a freshwater fish that is commonly bought by enthusiastic aquarists. Its dazzling colors make it stand out from other fish.

The scientific name of the giant betta is the Betta anabantoids. They belong to the family of Osphronemidae and are all freshwater fish.

An ‘anabantoid’ fish means that the giant betta breathes through a labyrinth organ that allows the fish to inhale oxygen from above the surface of the water.

The giant betta male has a highly aggressive nature. That is why they are also known as the Siamese fighting fish.

Because the giant betta male has such an aggressive temperament, he will probably attack any other male bettas that he perceives to be a threat to him and his territory.

For this reason, you may want to consider giving your giant betta his own aquarium.

However, if you want to have other fish in the same tank, we recommend a careful selection of the best tank mates. The giant betta should not be paired with any other naturally aggressive fish.

When your giant betta is feeling calm and at ease, he will swim around with smooth, gentle movements. However, rapid, frantic swimming may be an indication that he is feeling tense and stressed. 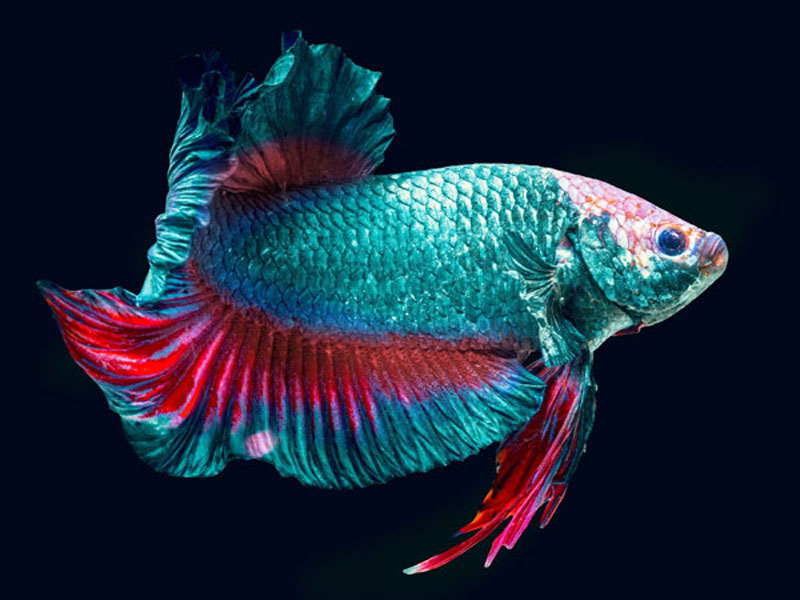 The giant betta is seen in a wide range of colors. The colors are strong and bright, making the fish easily noticeable among other fish.

It is these bright colors that make the giant betta so appealing. They are commonly seen in strikingly bright shades of blue, red, green, and orange. The males tend to have brighter coloring, while the females are a little more on the dull side.

The giant betta is significantly larger than other varieties of betta. An average fully grown male will typically reach a length of 3½ – 4 inches, while the female is usually a little smaller.

The giant Betta originates from the rivers and swamps of Southeast Asia. Therefore, it is used to water that is mildly warm and will not tolerate cold water at all.

The rivers in their original territory are usually either still and swamp-like, or very slow-moving. Therefore the giant betta needs water that does not have a very strong current.

The giant betta will thrive in water with moderate parameters.

The giant betta will get sick in very cold water, and may even die as a result.

The current in the water should be very low because the giant betta enjoys water that is close to stagnant.

The giant betta cannot tolerate hard water. The ideal dGH ( degree of General hardness) of the water in the aquarium should be between 5 and 20.

The giant betta needs water with a pH of between 6.8 and 7.

He will like having plants and rocks in his tank. He likes to hide in concealed spots, and will often be found behind the rocks and in crevices. You may also put one or two pieces of driftwood in the tank.

The giant betta enjoys swimming around freely and needs space to do this. It is recommended to give him a tank with at least 10 gallons of water.

If you want to add more fish to his aquarium, you will need a slightly bigger tank.

The giant betta male is known to have very aggressive tendencies, so you will need to be very selective when choosing tank mates for him.

The male giant betta will probably attack any other male betta in his tank, but it is possible to add other freshwater fish, as long as they aren’t bigger than him, and don’t have an aggressive nature

Female giant bettas can also be paired up with certain other fish. The male and female giant betta can be placed together in the same tank, but they should be watched carefully for compatibility issues.

The giant betta is carnivorous. It enjoys eating meat like bloodworms, shrimp, and mosquito larvae. 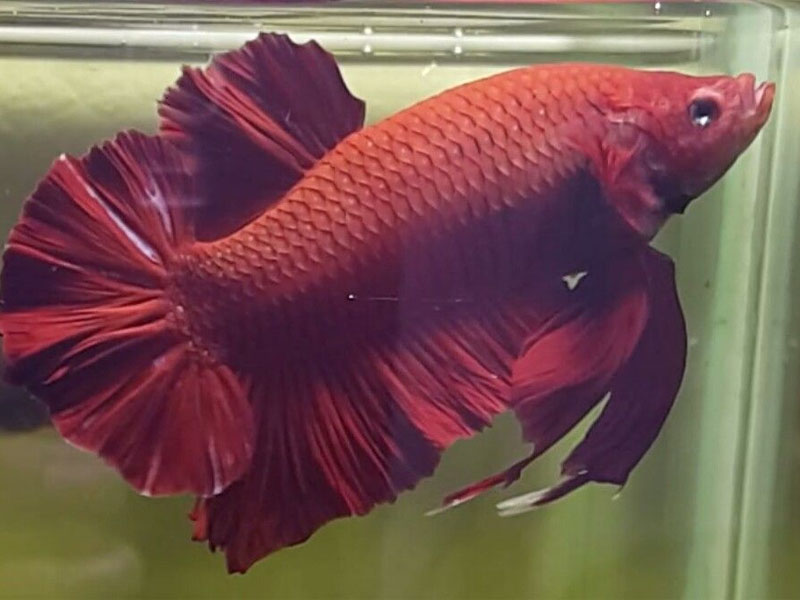 Similar to most betta fish care, the giant betta only needs limited attention. Follow the guidelines for the tank conditions, and clean the tank regularly, to avoid a build-up of algae.

Check the water parameters regularly and test the minerals in the water, such as calcium and magnesium, on a regular basis.

The giant betta is quite simple to breed. The male fertilizes the eggs after they have been laid by the female. She then keeps them under her fins until they hatch a few days later.

Is the Giant Betta Suitable for Your Aquarium?

The giant betta prefers to be in a tank of his own, rather than part of a shared aquarium. Many fish-keeping enthusiasts like this species, because of its striking appearance and attractive colors.

As long as your aquarium meets all its needs, you can happily keep a giant betta in your tank. 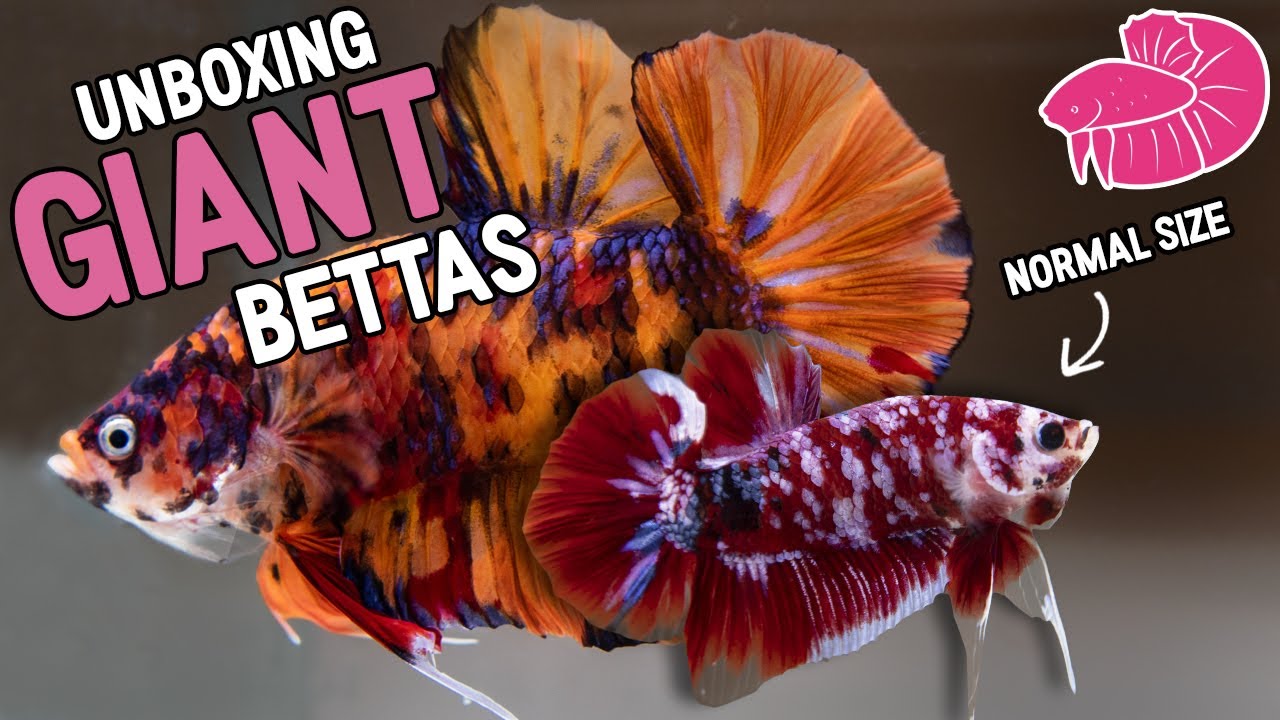 Types of Betta Fish 2022: Which is the Perfect One for You?

August 25, 2021 Robert
About Robert 420 Articles
Robert Woods is the creator of FishKeeping World, a third-generation fish keeper, and a graduate in animal welfare and behavior. He is also a proud member of the Association of Zoos and Aquariums, the Marine Aquarium Societies of North America, and the Nature Conservancy.

Types of Betta Fish 2022: Which is the Perfect One for You?