Everybody loves Nemo, so beginner fish keepers are often eager to have him swimming around their home aquarium.

Luckily, Clownfish are easy to keep and have simple diets compared to other saltwater fish.

They are also amazing to learn about, with unique communication and biology.

Each fish will bring personality in abundance, along with beautiful patterns and interesting movements, such as their ‘waddle’ while they swim.

In this article, we will talk you through how to care for them, what to feed them, and their specific tank needs. 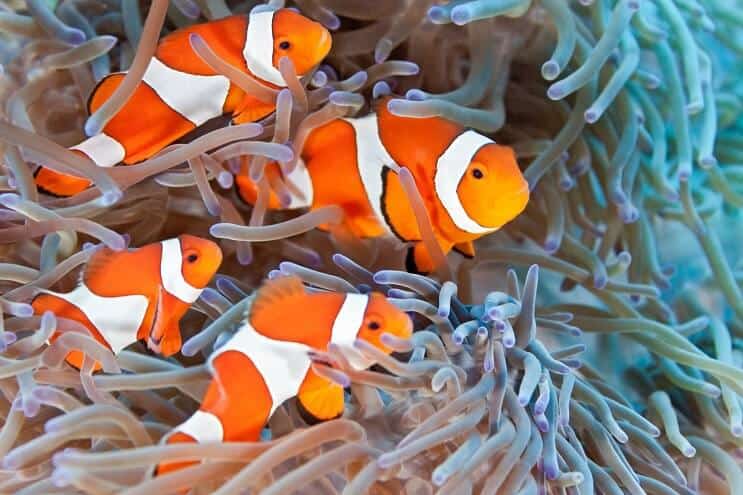 These bright little fish are many hobbyists’ first fish, making them a tried and tested beginner fish that brings personality and color to your aquarium.

All thirty species belong to the family Pomacentridae, which includes Damselfish.

They will live for 6 years however there are reports of some species living longer.

Clownfish cost around $15 and are usually available from aquatic stores that sell saltwater species as well as from online stores.

They have an interesting group structure that often fascinates aquarists, where the dominant member of the group becomes the female and forms a pair with a breeding male.

Living in the higher levels of the tank, they will often claim a small spot that has a weak current. They will leave this spot to be near Anemone if they are introduced, as this is where they would naturally find food.

They are well studied because of their fascinating relationship with certain species of Anemone. A combination of being resistant to the toxins and the production of mucus that prevents the Anemones from stinging them, allows them to live together.

To accommodate for their weak swimming, they need places to hide and feed. Clownfish have long bodies and a dip in their dorsal fin that makes it appear as if they have two fins and not one. The False Percula has 11 spines on their dorsal fins, compared to the True Percula which has 10 spines.

These species will grow to around 4 inches but are typically smaller. This makes them an excellent size for smaller aquariums or beginner tanks.

They have three white stripes: one behind the gills, one in the center of the body, and one at the bottom of the caudal fin. The central stripe protrudes to create a more triangular shape pointing towards the head.

Their stripes and fins often have a black outline which brings some real flare to them and makes their movements more enchanting. The False Percula will have thinner or no black outlines, which makes them bright in contrast to darker aquariums.

They have a rounded caudal fin which is why they aren’t great swimmers. It is very easy for them to be over-powered by strong filters.

True Perculas are most commonly orange, but natural black varieties can also be found. Some rare color morphs have also been bred to create varieties such as platinum (which is almost completely white). Clownfish live in the warm parts of the Pacific and Indian Ocean in coral reefs, or in shallow lagoons near Australia and Southeast Asia.

Due to their symbiosis with Anemones, they are rarely found lower than 40 foot and are not found in shallow waters due to the increased temperature and decreased salinity. They are weak swimmers, so will stick to Anemones that are protected from the current by corals or rocks.

The water near reefs has few nutrients which makes it clear. This takes time and is difficult to replicate in the home aquarium – but it is possible!

Anemones are harder to keep than Clownfish, so if you are trying to pair the two your tank must be designed around the Anemones first.

Although these fish don’t have any specific light requirements, an Anemone does so the type of lighting you need will depend on the species of Anemone you choose. Anemones will need at least a 50 gallon tank, so cannot be kept in the smaller tanks that a Clownfish can.

If this fish isn’t being kept with Anemones, then a smaller tank will work well as long as it is well established, with proper filtration and water conditions that replicate wild water conditions.

The aquarium must have a pH between 7.8 and 8.4 to keep them healthy. This convenient pH also allows for pairing with many other species.

Clownfish need a specific gravity that is between 1.021 and 1.026. Fluctuations in water quality can be reduced by keeping a larger volume of water either in the tank or in a sump.

There should be a good layout for the tank which provides both aesthetic pleasure as well as practical protection for them from the water flow. This can be done using rocks or live rocks, or fake reef inserts.

The best layouts are ones that provide a combination of open swimming spaces and hiding places.

They can be kept in sediment free tanks for ease of cleaning, but some tank mates may need substrate so it is best to plan inhabitants well in advance of putting them in the tank.

Clownfish need at least a 20-gallon tank, so they have enough room to both hide and explore. You will need a larger tank if you want to keep an Anemone too.

For each additional Clownfish allow a further 10 gallons. In the wild, Clownfish are found living among many other reef fish. They can live in small tanks as well as large communities, showing how adaptable they are.

It is very common to pair them with Anemones, but a pairing is not guaranteed and they can survive in captivity without this symbiotic relationship. If it is achieved however, it can be an amazing interaction to witness and to show off.

Small fish such as Damselfish, Wrasses, Dartfish, and Butterflyfish are easy to keep alongside Clownfish. Bottom dwellers such as Blennies and Gobies live at different levels of the tank so are also welcome tank mates.

Shrimps (such as Peppermint Shrimps) and Harlequin Shrimps can make interesting additions, they are peaceful and helpful by breaking down waste food.

Because of Clownfish’s weak swimming, bigger fish such as saltwater Angelfish and Tangs must be monitored to make sure they are not causing stress.

You can keep Clownfish together – it is recommended to keep them in pairs or groups of the same species. One of the things that make Clownfish such ideal beginner fish is that they are famously easy to feed.

They are omnivores that in the wild will eat copepods, small crustaceans, algae, anemone tentacles, fish eggs, and larvae.

Their varied wild diet can be replicated in the home aquarium by feeding them meaty foods such as Mysis shrimp and Brine shrimp. They will also readily eat frozen fish and table shrimp (provided it is finely chopped).

Live foods can be used to acclimate wild caught species, or to encourage breeding.

If you are lucky enough to have low algae levels in your tank, flakes and pellets that have spirulina will provide the vegetable side of their diet.

Though they are overall very hardy and easy to care for, Clownfish can still get sick, so need regular monitoring and care. This includes regular water testing and tank cleaning.

The water parameters need to be constant. You should check water conditions often, as the quicker a change is detected, the easier it will be to put right again.

Water changes of at least 15% should be done weekly, and even more for smaller aquariums.

Excess food should be removed to prevent algal growth and nitrite/nitrate sickness. Visible algae can be cleaned using a suitable cleaner.

Clownfish can heal from most minor setbacks rapidly but are still susceptible to stronger diseases such as ick or dropsy. Research any abnormal behaviors, discolorations, or a change in appetite to take steps to help them recover.

They will care for you back by being one of the most rewarding pets to keep and reducing your stress levels too.

How To Breed Clownfish

It is possible for Percula Clownfish to be bred in captivity, but first, you must know about their biology.

They are all born without a sex, and through social cues and hormone changes, they will become either a male or a female. The largest of a pair will become female, while the smaller will remain male.

If there are other Clownfish in the group, they will become males but will not breed with the female.

Together the breeding pair will perform rituals that include standing on their heads and pressing their dorsal fins together, alongside cleaning part of the rock near the Anemone for the eggs to be placed on.

They will produce anywhere from 50 to 500 eggs once a month, which after 8 days will hatch and swim to the surface until a fortnight later when they will find a home amongst the anemone.

Whilst they are not impossible to breed, it may take patience and a few failed attempts to get it right.

Is The Clownfish Right For Your Aquarium?

As one of the easier types of saltwater fish to look after, the Clownfish could be the start of your aquarium hobby! Or they could be your new favorite if you are considering adding it to an established tank.

They provide one of the most interesting personalities in the fish world, so are well worth considering.

If you are starting a new tank, make sure you look at a variety of species and options available so you can get the perfect tank that you are proud of.

Are you inspired to own a Clownfish? Do you have any experience with them? Let us know in the comments section below…

Mandarin Fish (Mandarin Dragonet) Care Guide: The Most Mesmerizing Fish In The Ocean

April 15, 2022 Robert
About Robert 454 Articles
Robert Woods is the creator of FishKeeping World, a third-generation fish keeper, and a graduate in animal welfare and behavior. He is also a proud member of the Association of Zoos and Aquariums, the Marine Aquarium Societies of North America, and the Nature Conservancy.