Different types of algae eaters behave differently, but most have a calm temperament and can live peacefully with a variety of other aquatic creatures.

Algae eaters are common in the pet trade, are easy to care for, and add diversity to the aquarium ecosystem. 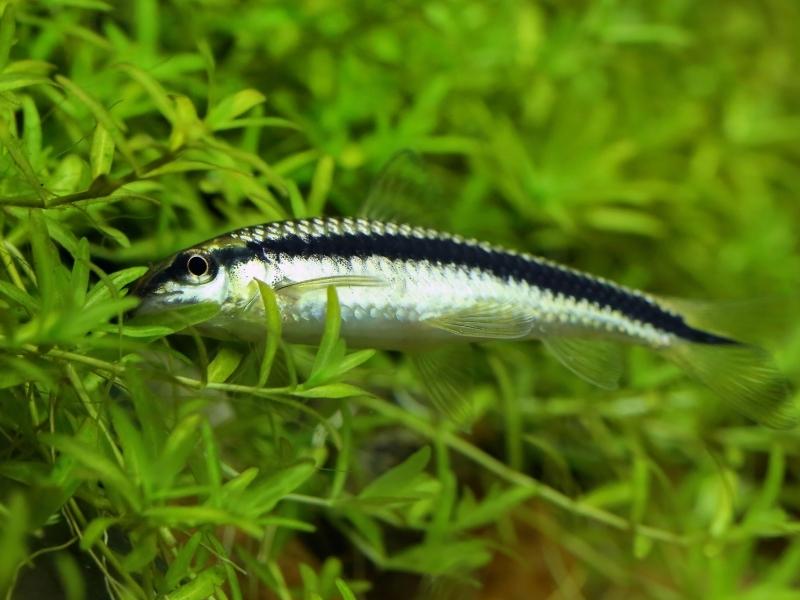 The Siamese algae eater, Crossocheilus oblongus, is a freshwater fish native to the Southeast Asian countries of Malaysia and Thailand in basins of Mekong, Phraya, and Chao.

The peaceful, social, and active behaviors of the Siamese algae eater make it a popular choice among beginner aquarists.

Cover the Siamese algae eater’s aquarium with a lid to prevent the fish from jumping out. There are no special water flow requirements for Siam. The Chinese algae eater is a loner fish and will mostly keep to itself at the bottom of the tank, but the fish may exhibit aggressive behavior towards tank mates of the same species and those similar in size.

To prevent stress, use gravel and sand as a substrate and add some rocks and decorations for hiding spots. The bristlenose pleco, Ancistrus cirrhosis, is a freshwater fish native to tributaries and streams in the Amazon basin, but the fish is also found in South America.

The distinct bushy appendages sprouting from the snouts of bristlenose plecos make them popular among freshwater aquarium hobbyists and also inspired their name. Otocinclus catfish spend most of their time at the bottom of the tank and try to keep away from larger, more aggressive tank mates.

Ensure that water hardness, temperature, and pH levels are constant, as changes can lead to stress and disease in otocinclus catfish. The Florida flagfish, Jordanella floridae, also known as the American flagfish, is a freshwater fish native to Florida in the St. John and Ochlockonee rivers.

Aquarium hobbyists and fishkeepers love the Florida flagfish for its vibrant colors and striking resemblance to the American flag.

Florida flagfish are peaceful fish suitable for a community aquarium, but they don’t do well with every freshwater tank mate, especially males of similar or other species.

The reticulated hillstream loach, Sewellia lineolata, is a freshwater fish native to Laos and Vietnam.

The black and yellow spots spread on the body, and the ridge running along the back gives this algae-eating fish its unique appearance.

Hobbyists and fishkeepers love the reticulated hillstream loach for its interesting appearance and peaceful nature.

Reticulated hillstream loaches don’t have scales on their bodies, which makes them intolerant to water spikes, chemicals and medications, and fluctuating pH levels.

Keep the water within the correct parameters to ensure optimal health and longevity of these unique loaches. The Atlantic blue tang, Acanthurus coeruleus, is a saltwater reef fish native to the coastal waters in the Caribbean Sea and the Gulf of Mexico.

Larger, well-established aquariums are more suitable for Atlantic blue tangs as they are prolific grazers with a large appetite for algae and plant matter. The convict tang, Acanthurus triostegus, is a saltwater fish found in the Eastern Pacific and Indo-Pacific waters.

Aquarium hobbyists and marine aquarium keepers love the convict tang for its striking black-and-white striped pattern and ability to adapt well to captivity.

Convict tangs are semi-aggressive but mostly peaceful fish and will do well in a large community tank. The molly fish, Poecilia sphenops, is a tropical fish native to Central America, particularly Mexico and Southern USA. Some varieties of molly prefer a freshwater environment, while other types of molly fish live more happily in saltwater.

The molly fish appears in varied colors, tail shapes and patterns, and other physical features.

Mollies are peaceful fish that prefer to swim in schools, but they can also adapt to a community tank with other peaceful fish.

To help freshwater mollies adapt to captivity, add aquarium salt to their tanks to imitate the wild brackish waters of their natural habitat. The tailspot blenny, Ecsenius stigmatura, is a saltwater fish found in the Western Pacific Ocean.

This fish’s vibrant colors, peaceful nature, and fascinating, comical behavior make it a popular choice among aquarium hobbyists and fishkeepers.

A diet rich in plant material, microalgae, and blanched vegetables as supplements ensures the longevity and health of these fish.

Tailspot blennies are inquisitive and get along with species of different appearances, but they may show signs of aggression — such as fin nipping — to members of their own species. The one spot foxface rabbitfish, Siganus unimaculatus, is a saltwater fish found in the Indian Ocean and the western Pacific Ocean.

The striking color pattern, fascinating behavior, and hardy nature of this fish make it a popular choice for aquarium hobbyists.

One spot foxface rabbitfish feeds on filamentous algae and flesh algae, which both grow on mangroves and corals in the wild.

Provide a staple diet of marine plants, algae, and protein-rich foods to keep this fish healthy.

To prevent territorial aggression, do not keep a spot foxface rabbitfish with other rabbit fishes.

The Amano shrimp is a freshwater shrimp native to the streams and rivers of Japan, Taiwan, and China.

These shrimp are one of the most popular algae eaters due to their hardiness, peaceful temperament, and constant habit of foraging for algae to eat.

The amano shrimp is not picky and will eat almost any kind of algae, including hair algae, brush algae, string algae, and even black beard algae. Two amano shrimp per 5 gallons of water is enough to help clean the tank of algae.

Amano shrimp are peaceful and can be housed with other peaceful fish and invertebrates, including guppies, small tetras, betta fish, peaceful barbs, vampire shrimp, and mystery snails. The cherry shrimp is a freshwater shrimp that lives in streams and ponds in South-East Asia.

Cherry shrimp are popular both for their deep appetite for algae, but also for the appearance of their translucent bodies with bright red patches.

These shrimp are peaceful and shy, and should be housed with small, peaceful tank mates that won’t bully or attempt to eat the cherry shrimp. Freshwater snails, neon tetras, Amano and ghost shrimp, dwarf gouramis, and bristlenose plecos are good tank mates for cherry shrimp. Nerite snails are hardy snails that can live in a wide range of water conditions. Freshwater nerite snails come from brackish waters in Eastern Africa, while saltwater species tend to be from the Pacific or Caribbean coast.

The nerite snail is one of the most popular algae eaters due to its constant appetite for most kinds of algae.

However, when the tank is clean of algae, nerite snails need to be fed in order to stay healthy. They are scavengers and will eat decaying plants or leftover fish food, but to make sure your nerite snails are well-fed, provide sinking algae wafers, blanched vegetables, or aquatic snail food blocks.

Nerite snails can live with peaceful fish that won’t try to eat them, like rasboras, corydoras, and small tetras. Avoid keeping nerite snails with fish that will eat them or pull on their antennae, such as pufferfish and snail-eating loaches. Cerith snails are a group of saltwater snail species that live in tropical waters all over the world.

The Florida cerith snail (Cerithium litertatum) is the most common cerith snail in the aquarium trade, but all cerith snails are algae eaters. They are also safe for reef aquariums.

The cerith snail grazes on most kinds of algae and detritus in an aquarium. Like nerite snails, cerith snails need to be fed once the aquarium is clean of algae. Provide sinking algae wafers or aquatic snail food blocks at night, when cerith snails are most active.

Cerith snails need small, peaceful tankmates. Avoid keeping them with snail-eating fish. Do not keep a cerith snail in the same tank as a hermit crab, because the hermit crab will try to take the cerith snail’s shell.

Astraea snails are saltwater snails that come from the tropical reefs of the Caribbean Sea and the Gulf of Mexico.

The astraea snail feeds off of hair algae, brown algae, and green algae, as well as bacteria that grows on rocks and other surfaces in the tank.

Astraea snails are solitary by nature, so they are best suited to tanks with no more than one other snail. Do not keep astraea snails with crabs or bottom-feeders who may knock the snails over, because these snails can’t easily right themselves. The emerald crab is a saltwater crab that is native to the reefs of the Caribbean.

Emerald crabs not only eat almost all kinds of algae, but also clean the tank of any kind of meaty waste, such as live food that the tank’s fish leave behind. If your tank has an unwanted snail or shrimp infestation, these small green crabs will solve the infestation by eating the snails and shrimp.

Emerald crabs are mostly peaceful and can be safely kept with most fish, but they will eat other invertebrates like snails, shrimp, and hermit crabs.

If an emerald crab is hungry, it may try to eat coral or even small fish in the tank. As long as the emerald crab is fed often with supplemental food like dried seaweed, chopped shrimp, or fish pellets, it can be kept safely in reef aquariums and with most kinds of fish.

Algae eaters are an important part of the aquarium environment, as they keep algae at bay while keeping the aquarium active and beautiful.

Different algae eaters prefer different surroundings, diets, and temperaments, so be sure to research each type of algae eater before adding it to the aquarium.

Caring for algae eaters in the aquarium involves recreating their natural habitat with appropriate substrates, plants, rocks, and caves.

Keeping the tank water within the correct parameters, including water temperature and chemistry, salinity, and pH level, ensures the algae eater adapts well to the new environment.

October 11, 2018 Robert
About Robert 461 Articles
Robert Woods is the creator of FishKeeping World, a third-generation fish keeper, and a graduate in animal welfare and behavior. He is also a proud member of the Association of Zoos and Aquariums, the Marine Aquarium Societies of North America, and the Nature Conservancy.