The Dragon Wrasse is a fish that’s full of personality. It’s always on the lookout for food and it displays some unique behaviors to get it.

They are an aggressive species, which may put some people off, but it is worth braving this aggression because these are very attractive fish that change in appearance quite a bit as they mature.

We will cover everything you need to know about Dragon Wrasse care in this article, such as their ideal tank design and their dietary needs. The Dragon Wrasse has many names, such as the Rockmover Wrasse, Carpet Wrasse, Bar-Cheeked Wrasse, Reindeer Wrasse, and Olive-Scribbled Wrasse.

Its scientific name is Novaculichthys taeniourus and it is part of the Labridae family, which contains all the wrasses. It is currently the only member of its genus.

Dragon Wrasses are saltwater fish from the Indo-Pacific, living around places such as Australia, The Philippines, Hawaii, and California. They live in shallow coral reefs and lagoons.

Having some previous fishkeeping experience is useful due to their behavior. Beginners may want to start with something a bit easier.

You should be able to get a Dragon Wrasse for about $50, but the price can vary a lot.

Check any prospective fish for signs of disease. Look out for any markings, wounds, or strange behaviors. Find a different stock if you do notice any problems.
Once introduced, a Dragon Wrasse can live for over 10 years in a healthy aquarium.

Dragon Wrasses are aggressive and territorial, they will attack any fish that gets too close.

They will also eat any animals (including invertebrates) that are small enough to fit in their mouths, so they should only be kept with large aggressive tank mates. They are not reef-safe.

When they feel threatened, they may dive into the substrate, wiggling around until it is difficult to see them. They may move around under the substrate and appear in new locations.

When searching for food, they often move stones and debris around, which is why they are sometimes known as “Rockmover Wrasse”.

In the wild they may even work together, taking turns at lifting rocks and grabbing what lays hidden beneath.

Make sure your decorations are secured down so they don’t get moved around. Juveniles and adults look completely different, it would be easy to mistake them as different species, but all forms of the Dragon Wrasse are beautiful.

Juveniles are often referred to as “Reindeer Wrasse” because they have appendages on their head that look like horns/antlers.

They have a flat body that could be covered in a variety of colors, including white, black, reds, and dark greens.

Long dorsal and pelvic fins extend from the body. These have dark rays and a clear membrane, making them look frilly.

The design of their body and fins makes them look like seaweed. Juveniles even drift through the water like seaweed debris, making excellent camouflage. Adults lose this aesthetic. The frilly nature of the fins is lost, and their body becomes covered in a structured pattern of gray spots on a dark body. Their tails become white with a black edging too.

Sexing this species is very difficult because males and females look virtually the same and they are roughly the same size.

You can find Dragon Wrasses on opposite sides of the world because they live in Indo-Pacific regions, such as California, Panama, Hawaii, Australia, and Indonesia.

They live in the shallows (46-82 feet) on reefs and in lagoons. Here there are plenty of corals and/or rocks to create homes and areas to defend.

There would be lots of grassy areas among a substrate of sand and rubble.

The water would be warm and alkaline.

Recreating this environment is the best way to keep your Dragon Wrasse happy and healthy.

Starting at the bottom of the tank, use a sandy substrate to create a layer about 2-4 inches thick, giving your Dragon Wrasse the ability to burrow. Larger grained substrates may scratch when they do this.

Use rocks to add some decoration to the aquarium. Do not use corals or your Dragon Wrasse will damage them.

Secure your decorations in the substrate so they don’t become unstable when your fish digs.

Spread some grass around the tank where you can.

Use a filter with a strong outlet. Make sure you have a tight-fitting lid too, as this fish could jump.

What Size Tank do they need?

An adult Dragon Wrasse will need a fish tank of at least 100 gallons. They are large fish that will be more likely to show aggression when living in a cramped environment.

Any extra space you can provide will be appreciated. Finding the right tank mates for a Dragon Wrasse can be difficult. Their aggressive behaviors can be too much for a lot of fish. They will eat small fish too.
This means that tank mates must be large and able to defend themselves.

This limits your selection quite a bit, but you can try groupers, triggerfish, hawkfishes, and snappers.

Invertebrates should be avoided as most will be eaten quite quickly. This includes corals; Dragon Wrasses are not reef safe.

Your Dragon Wrasse should be the last fish added to your setup. If the Dragon Wrasse is established first, it will not appreciate new tank mates being added to its territory, so it may lash out at them.

Watch out for signs of aggression, especially while the Dragon Wrasse is getting used to its new environment. You may have to separate fish if they fight regularly.

Many people suggest that you buy a juvenile and keep it single. This removes compatibility problems and you get to watch all the changes that occur as it matures.

Can You Keep Dragon Wrasse Together?

No, only keep one Dragon Wrasse per tank. They are aggressive and territorial; seeing another Dragon Wrasse in their surroundings would lead to frequent fighting until there is only one left.

Dragon Wrasses are carnivores. They have two large teeth that they use to break down their prey.

They would naturally spend a lot of their time swimming around reefs searching for food, sometimes having to move things around in their environment.

They would happily eat anything that comes their way which is small enough to fit into their mouth. This could be small fish or invertebrates, such as worms, shrimps, and snails.

This gives you a lot of meaty foods to choose from when designing their diet. It also makes it much easier to vary their diet, which is important for providing a wide range of nutrients.

You can provide high-quality flake and pellet foods too, but moderate your use of these as they are less nutritious.

Give them small amounts of food 2-3 times a day.

If you know how to deal with aggressive fish, caring for a Dragon Wrasse is relatively straightforward.

As with all fish, they need a clean environment and a healthy diet.

General tank maintenance consists of performing partial water changes and wiping away excess algae. You will need to trim any live plants as needed too.

Use a water testing each week so that you can respond quickly if any of the water parameters stray from the ideal levels.

Dragon Wrasses are not prone to any diseases in particular, but they can pick up common saltwater diseases.

Separate the affected fish into a quarantine tank before treatment.

It is very difficult to get Dragon Wrasses to breed in captivity, you would need a large commercial setup. It’s not worth the effort or the risk of aggressive outbursts between your fish.

A mating pair would naturally go through a courtship ritual, ending with the female releasing her eggs and the male fertilizing them.

The fertilized eggs would float in the ocean current for up to 75 days before finally hatching.
Are Dragon Wrasses Suitable for Your Aquarium?

Beginner aquarists should be wary of a Dragon Wrasse’s aggressive nature, as it can cause problems if you’re unprepared.

Anyone who feels confident that they can handle this behavior should be able to care for a Dragon Wrasse without issue. Their needs are simple; just clean their tank and give them a varied, nutritious diet.

You may be frustrated by the limited tank mate options, but these fish are beautiful and their fiery personality will keep you entertained for hours.

Purchasing a juvenile is particularly rewarding because you get to watch their appearance and behavior change drastically over time.

What does your Dragon Wrasse aquarium setup look like? Let us know in the comments below… 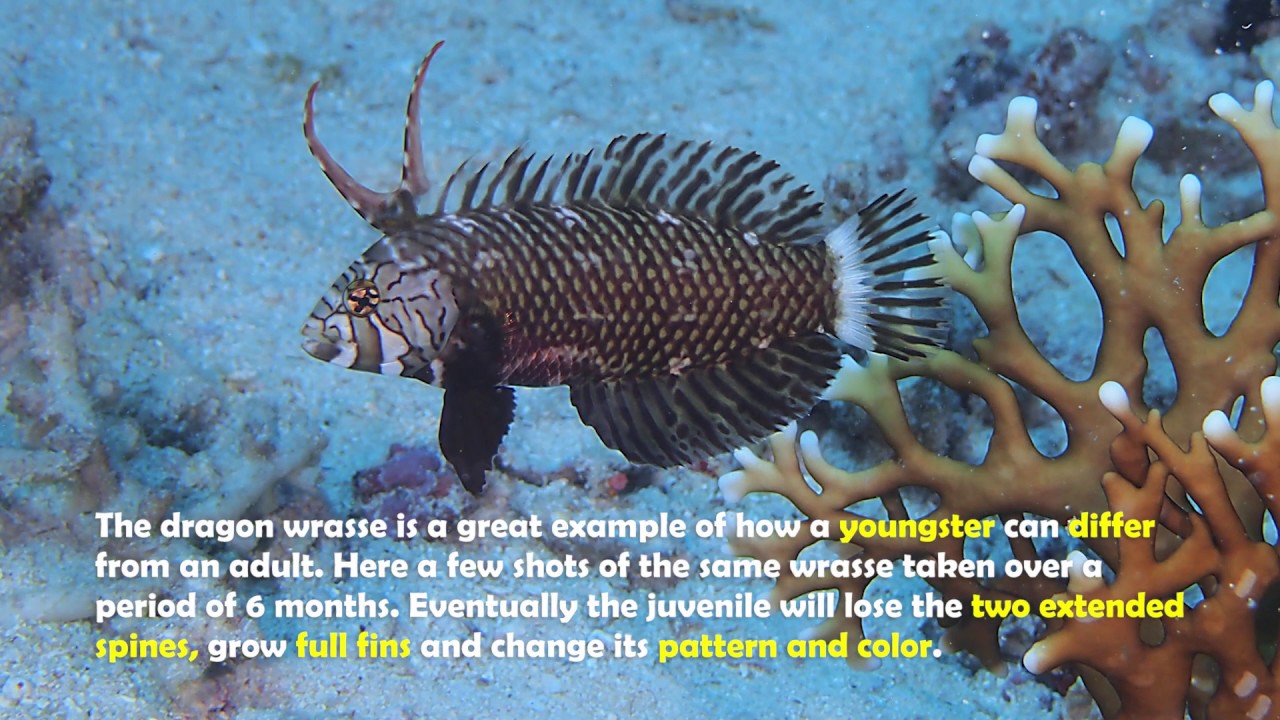 April 15, 2022 Robert
About Robert 468 Articles
Robert Woods is the creator of FishKeeping World, a third-generation fish keeper, and a graduate in animal welfare and behavior. He is also a proud member of the Association of Zoos and Aquariums, the Marine Aquarium Societies of North America, and the Nature Conservancy.