If you’ve come to this page, you’ll be looking for a name for your new pet and you’re in luck.

We have compiled the largest list of fish names online and I’m sure you’ll leave this page with a perfect name for your fish.

Just like other animals, fish have characteristics and personalities all of their own, so you may want to wait a few days to get to know them before you choose a name.

The options are endless for fish names.

Not only can you name them after their characteristics and personalities, you can choose famous people’s names, TV or movie characters, place names or simply just make the name up.

Let’s start off, by looking at famous fish names.

Exclusive Bonus: Get a complete printable name list here and never be stuck for names for your fish again!

Perhaps you’d like to name your fish after the some famous fins? Here are a few suggestions of fish that have starred in movies:

If you’re buying your fish in pairs, what about giving them a great pair name?

Meaning: Bruce literally means ‘thick brush,’ it is both a surname and a given name.

Popularity: Made more popular by movie stars such as Bruce Lee and Batman’s Bruce Wayne, Bruce is a world-wide popular name.

Suggested Use: Perhaps a popular name for a fish because of Bruce from Jaws. The name would suit a larger fish breed such as a Pleco.

Popularity: Well-known name in its own right because of Bob Marley and Bob Dylan.

Suggested Use: As a fish name, Bob is a simple and short yet strong choice of name and would suit breeds such as Guppies and Cherry Barbs.

Meaning: Nemo is of Greek origin and is actually Latin for ‘no one’.

Popularity: Unsurprisingly, the name Nemo shot into popularity in 2003 when ‘Finding Nemo’ was released.

Meaning: Shadow is a Shakespearean name.

Popularity: It would be a great name for a fish who likes to lurk in the shadows of your aquarium.

Popularity: Spot would make a great name for most breeds of fish in which spots are a common feature.

Suggested Use: Any spotty fish for example the Spotted Puffer Fish. 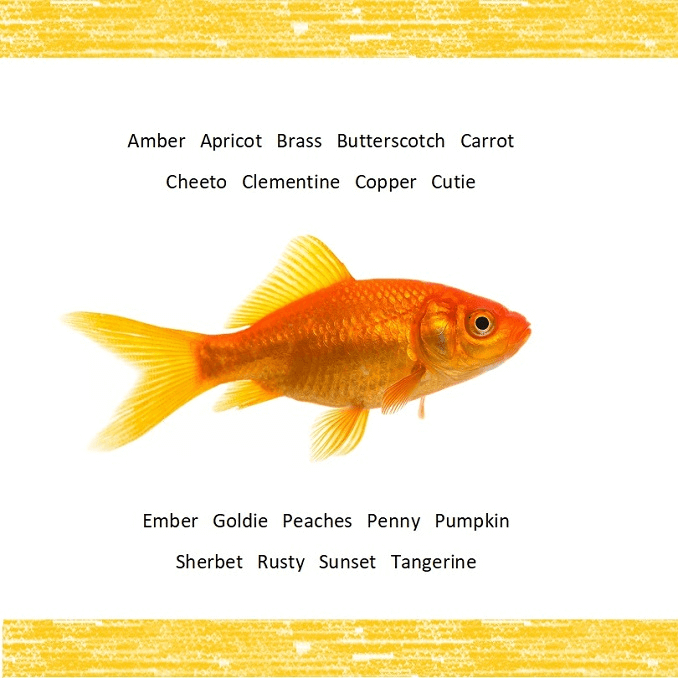 Meaning: From the Latin name ‘Angelus’ which was means messenger.

Popularity: Although it derived from a masculine name, Angel is now more commonly used as a female name.

Suggested Use: Any breed but most commonly used with Angelfish.

Popularity: This name is making a comeback after losing popularity after 1905.

Suggested Use: Any bright and cheery fish, for example the Yellow Tang.

Meaning: Jewel is a precious stone, and is also derived from the French word ‘jouel’ which might have been related to jea (game).

Popularity: Generic gemstone name used to symbolize how special and precious one is.

Suggested Use: For a rare breed or special fish such as the Zebra Pleco.

Popularity: Originally used as a male name, this is now a common female name.

Suggested Use: For any lively fish breeds such as a Barb.

Meaning: A Greek name which means ‘flower’ or ‘bobbin’.

Popularity: Sometimes short for Penelope, though it is also a name in its own right.

Suggested Use: Any colourful fish, for example a Rainbow Fish. 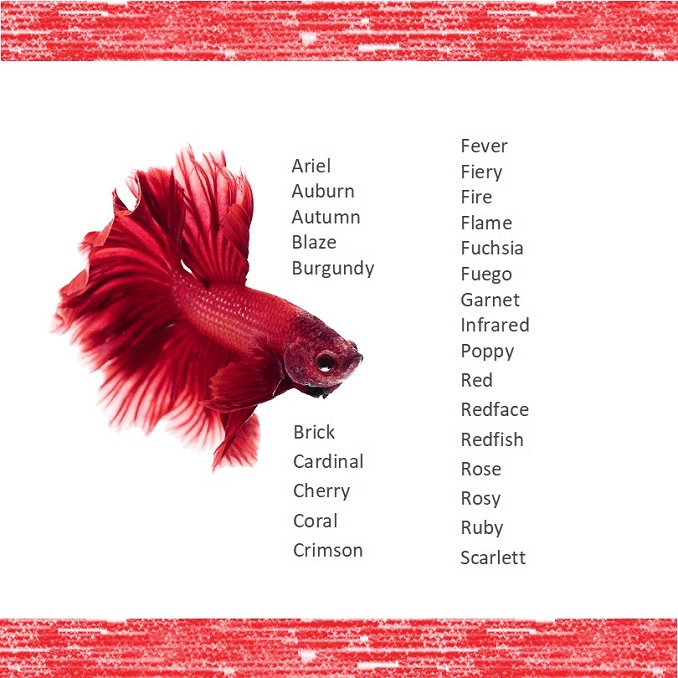 Suggested Use: Any breed at all.

Meaning: A popular name used to symbolise not only the colour but also the precious metal, gold.

Suggested Use: Goldfish and other fish that are precious.

Suggested Use: Appropriate for the more peaceful and calm fish such as the Neon Tetra.

Meaning: Finn is an Irish name which means ‘fair’.

Popularity: Fin is an adaptation of Finn, and play on words with the fish ‘fin’

Suggested Use: Any fish, perhaps those with larger fins for example any of the Betta species.

Popularity: Glimmer was a name of a character in the Hunger Games.

Suggested Use: Any sparkly or shiny fish such as the Rainbow Fish. If you’re searching for something outside the norm, or a little bit more unusual then I’m sure you’ll find the perfect name in this vast list. It’s split up into male, female, and unisex names and it’s been alphabetized.

Still Not Found What You’re Looking For?

If you’ve still not spotted anything that suits your fish, here are some more options.

What’s your favourite film? Could you name all the fish in your aquarium after certain characters within the film?

For example, if your favourite film is Harry Potter, you have a vast array of names such as Harry, Hermione, Ron, Sirius, Hargid. You also have the option of spells, and magical objects.

Alternatively, does your fish have any special markings that you could name it after? For example, Spot, Stripe, Blotch etc.

How about combining two of the names above e.g. Bubble Galaxy or Goldie Star?

If you’re looking for something a little different, how about adding a title to the fishes name – Mr Clifford, Sir Ned or Lil Snowy?

And finally, if you’re still struggling for a name…why not come up with your own unique name?

If you can think of any more names, let us know in the comments section below.

Aquarium Slang words and Acronyms That Hobbyists Must Know

May 24, 2019 Robert
About Robert 468 Articles
Robert Woods is the creator of FishKeeping World, a third-generation fish keeper, and a graduate in animal welfare and behavior. He is also a proud member of the Association of Zoos and Aquariums, the Marine Aquarium Societies of North America, and the Nature Conservancy.