Bettas are one of the most popular freshwater fish around, especially with first-time fish keepers.

There are many varieties, each having different tail shapes and colors, from the crowntail betta to the Veiltail Betta.

The males are the most sought after, because of their vivid colors and long flowing fins. They often have great personalities, so it’s easy to become attached to these little fish when you keep them as a pet.

So how long can you expect a Betta Fish to live? The short answer is roughly 3 years; however there are many factors which contribute to the lifespan of this fish.

In this article we’re going to take a look at their average life expectancy and how you can increase the lifespan of these beautiful fish.

How Long Do Betta Fish Live In Captivity? 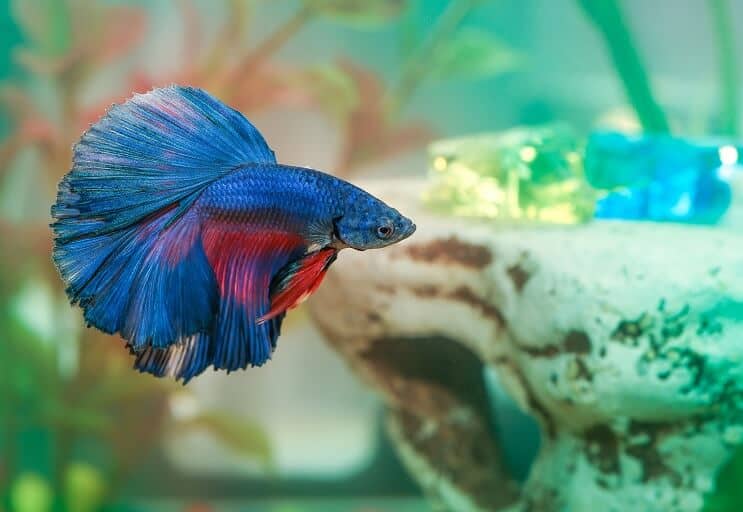 If Bettas are cared for properly and given a large enough tank to live in, with clean water, they usually live for an average of 3 years.

However, this doesn’t mean that when you buy your fish that you can expect to have it for 3 years. Male Betta Fish only tend to be sold in pet stores when they are around 1 year old. This is when their colors and fins have properly developed. Females are sold slightly sooner, usually at around 6 months old.

Females tend to live for a few more months than males do, but people normally keep males due to their bright colors.

Because your fish is usually 6 months – 1 year old by the time you buy it, you can expect him to live for around two – two and a half years old.

However, it’s not uncommon for Bettas to live until 4 or 5 years old if they are given the perfect tank conditions and cared for properly (more on this later).

How Long Do Betta Fish Live In The Wild?

In the wild, Bettas live in shallow freshwaters such as ponds, streams, rice paddies, and canals. They are native to Cambodia and Thailand but have spread to other regions now such as Singapore, Brazil, and Malaysia through human introduction.

It is presumed that the lifespan of Betta Fish in the wild is slightly shorter than those in captivity. This is because the waters in which they live are not as regulated as a fish tank; they can become polluted, which can destroy food sources and plants and therefore reduce the lifespan of the fish.

In the wild, males are also exposed to other males more frequently. They got their name ‘Siamese Fighting Fish’ because they are highly territorial and aggressive to other fish which come into their space.

Wild Betta Fish are actually in the vulnerable category on The IUCN Red List of Threatened Species due to the amount of pollution they are exposed to and a loss of their habitat due to expansion in farming and development in Thailand.

How to Increase Your Bettas Lifespan So now we know how long these fish live for in the wild and in captivity, we can start to think about how to maximize the length of their life. It’s really quite simple and if you follow all of the advice below, you’ll increase their chance of having a longer life and also improve the quality of their life.

Make Sure You Buy a Healthy Betta

When you pick your Betta, it’s really important to choose one that is healthy (you don’t want to bring any disease back to your tank).

Buy your fish from a reputable store. Avoid buying any fish which have any of the following – these factors can indicate the fish haven’t been well looked after and therefore may be stressed and aren’t likely to live long.

You should be looking for a fish which is:

We mentioned earlier that these fish are usually adults by the time they are sold in pet stores, so it is also worth asking how old the fish actually are.

Keep Them in an Appropriately Sized Tank 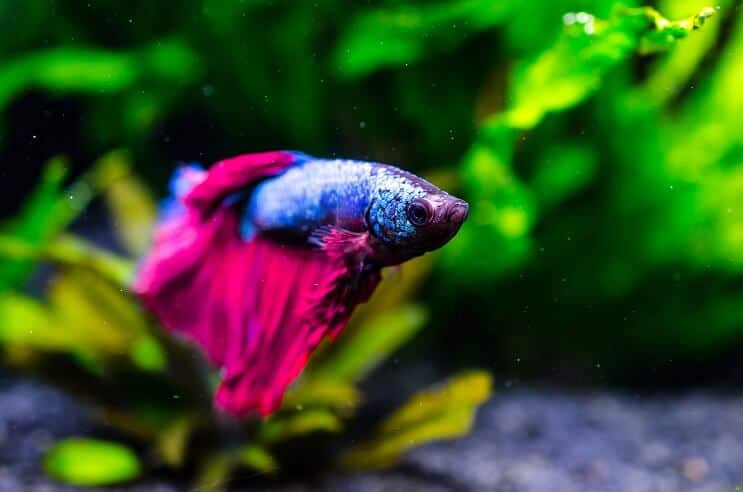 Betta Fish require a tank which is at least 5 gallons.

When you buy your Betta from a pet store, you’ll often find them being sold in cups or tiny 1 gallon tanks. The males are kept in these containers in shops because they will fight with one another if they are in the same tank.

However, just because they are sold in these containers does not mean this is an acceptable sized tank.

You may have heard than because in the wild Bettas live in really shallow waters, a small tank is fine for them. This simply isn’t true. The thing to remember is that these shallow bodies of water which they live in (in the wild), run for miles and miles so they have plenty of opportunity to swim and escape other territorial males.

A 5 gallon tank is the absolute minimum that you should keep this fish in.

If you’re keeping a female as part of a community then you’ll likely need a larger tank. If you’re unsure which size tank you need, think about how many fish you want to keep and the requirements for each species. This might sound obvious, but to increase the life expectancy of male Betta Fish – keep them in separate tanks.

We mentioned earlier that they have a reputation to be aggressive and territorial. Just before the 19th century, wild species were bred to create aggressive fighting fish which is how they got their very nickname; the Siamese fighting fish.

Bettas were used as a form of entertainment, much like cockfighting, as they battled it out in tanks. Unfortunately this is still common practice in Thailand.

In the wild if two males are competing for space, they’ll fight for a couple of minutes and then one of them will back down and find another territory.

In a small tank, the fish may fight until death because they don’t have anywhere to escape to. Female fish aren’t as aggressive and can be kept together with caution if they have enough space to claim as their own territory.

To ensure your fish has the longest happiest life possible, keep males separate in tanks. You can either keep them in a tank on their own, or in a community tank with compatible species such as Rasboras. Bettas and Rasboras naturally coexist in the wild so they are a great choice, as are Neon tetras, Loaches, Bristlenose Plecos and Snails.

Use a Filter and a Heater

It’s a common myth that because in the wild Betta Fish live in rice paddies, that they can tolerate unheated dirty water.

The waters in Thailand are naturally heated due to their climate, so it’s important to use a heater in your tank. They are used to temperatures between 75-80°F.

It’s also essential to use a filter. They will not thrive in dirty, unfiltered water. A filter will clean the water, converting the buildup of ammonia and nitrites into less harmful compounds, and also keeps the water aerated.

Even with a filter, it’s still important to carry out regular water changes to remove the buildup of nitrates.

Provide Them with a Good Diet If you really want to increase the lifespan of your Betta, one of the most important factors to consider is their diet. The diet which you provide, affects their growth rate, color and lifespan.

Bettas are carnivores and in the wild they eat plenty of insects. This can be difficult to replicate in a fish tank, so if you can’t get hold of many live foods for your fish, there are plenty of foods that you can use instead.

The most important nutrition for them is protein and fat. You can choose a quality pellet, frozen food or flake food but your best option is to choose one specifically formulated for Bettas.

Ensure that the first ingredient listed is a protein to make sure the food has a high nutritional value. You don’t want too many filler foods because they have short digestive tracts and can’t process fillers well.

If you really want to give them the best diet possible, then you can make your own homemade fish food, and ensure it is high in protein. You can use ingredients like bloodworms and brine shrimp to create the perfect mix.

Whilst we’re on the topic of food, it is so easy to overfeed fish; this can lead to bloating. Bloating can affect the swim bladder so they will be unable to swim and ultimately will die if not treated.

Only feed your Betta what it can eat within two minutes, twice a day. This will ensure they stay healthy and live for as long as possible.

Use Plants to Provide Oxygen

The last tip we have for creating the best possible environment for your Betta, and therefore extending their lifespan, is to include plants in your setup.

The benefit of having plants in your aquarium are not dietary based as they are for other fish. These fish are carnivorous so any nibble they have at the plant will be just that; a nibble!

Using plants also provides them with plenty of hiding spots; this is ideal if you’re keeping a group of females.

Some of the best plants to include in your Betta aquarium are:

How Long Can A Betta Fish Live Without Food?

A Betta can survive for up to two weeks without food however this is not something we ever recommend doing. If you’re planning a vacation, try to find someone to keep up with the regular feeding schedule, or use an automatic fish feeder.

How Long Do Betta Fish Live In A Bowl?

If you keep your Betta in a bowl you will reduce their life expectancy significantly. We do not recommend this. Betta Fish that are kept in a bowl usually live for less than one year.

How Long Do Betta Fish Live In 1 Gallon Tank?

You should expect a Betta in a 1 gallon tank to live for less than a year.

How Old Is The Oldest Betta Fish?

It is rumored that the oldest Betta Fish lived to be TEN years old and was raised in laboratory conditions, although there is no evidence to confirm this.

You can expect your Betta Fish to live for around 2 years from when you buy them. But it is possible that they will live for another year or so if you give them the best possible care.

Make sure you choose the right sized fish tank, keep males separate, maintain the ideal water parameters, and feed them a great diet.

If you do all of these things you’ll provide your Betta Fish with a healthy life and you’ll be rewarded with brightly colored, happy fish.

Do you have a Betta Fish or are you planning to get one? Let us know in the comments section below.

August 26, 2021 Robert
About Robert 420 Articles
Robert Woods is the creator of FishKeeping World, a third-generation fish keeper, and a graduate in animal welfare and behavior. He is also a proud member of the Association of Zoos and Aquariums, the Marine Aquarium Societies of North America, and the Nature Conservancy.