The GloFish betta is an exquisite-looking, fluorescent freshwater fish of the betta fish family. It is brightly colored and has beautiful fins. This fish has been genetically modified to ‘glow’ and fluoresce under certain light conditions.

The GloFish betta, like many other GloFish, has been patented because of its unique ability to fluoresce when it is surrounded by a blue LED light. It has been genetically programmed to produce a fluorescent protein that makes it glow. The GloFish betta is a very popular species of freshwater fish. Its main appeal is its ability to glow, showing off its magnificent colors. This sets it apart from other fish.

The GloFish betta is a species of betta fish that has been genetically modified, using a method that was first developed by scientists in Singapore.

Their initial intention was to be able to identify certain toxins in the water. The idea was that these fish would fluoresce when toxins were present in the water. But they soon realized that the capability to fluoresce made these fish special and they adapted them even further.

The name GloFish is descriptive of the way that the fish glows, almost like a child’s glow-in-the-dark toy. The name has now been patented, and there are many different species of GloFish that have been adapted and genetically modified in this way.

The GloFish betta has the ability to breathe while on the surface of the water. It is an anabantoid fish. It has a labyrinth organ, which helps it to inhale oxygen from the air.

The GloFish betta male is a highly aggressive fish. It is part of his nature to attack other males of the same species. For this reason, all species of betta are also called Siamese Fighting Fish.

The GloFish betta originates from a species of betta that was native to specific parts of Southeast Asia. Those fish are commonly found in countries such as Thailand, Cambodia, Indonesia, and Vietnam.

The male GloFish betta is a very aggressive fish. If he feels threatened in any way or thinks that his territory is being invaded, he will attack all other male bettas nearby. But he will probably tolerate the presence of female bettas.

Because of their aggressive temperament, a GloFish betta should ideally be kept in his own tank. He would be happiest in an aquarium of his own because they tend to be solitary in nature and like to have their own space.

It is possible to pair them with other fish in a communal aquarium, but their tank mates should be selected very carefully, to avoid conflict.

A GloFish betta that holds his fins open, allowing them to wave freely in the water rather than keeping them stiff and taught, is generally content and happy.

If he is feeling stressed, anxious, or in any way under threat, his fins will be taught and stiff. This may be an indication that he is about to attack.

Smooth, gentle swimming movements suggest that your GloFish betta is feeling calm and safe. He will be placid and at ease.

However, very rapid, frenetic movement around his tank, bumping into other things or hitting his nose against the bottom of the tank, could indicate that he is feeling stressed and anxious. The shiny colors of the GloFish betta are unusual and quite unique in their ability to glow. They are highly fluorescent and will glow brightly in the right lighting conditions.

This ability to fluoresce did not originally come naturally. Certain species of tropical fish, including some bettas, have been specifically genetically modified to create this unusual appearance.

The most common colors of GloFish betta are fluorescent green, yellow, orange, red, and blue. They are extremely popular because of their attractive colors. The GloFish betta is originally from the species of betta that is native to the rivers and marshes of Southeast Asia. Therefore it is not fond of extreme water temperatures. The water in its natural habitat is usually mildly warm.

The waters of its forefathers’ original rivers and marshes are slow-moving, with very little to no current. As a result, the GloFish betta species prefers the water in its aquarium to have only a gentle flow, with a very mild current.

The GloFish betta will thrive in a tank with moderate water parameters. They do not like extreme temperatures.

The ideal temperature of the water is between 72° and 81° Fahrenheit, with an average temperature of about 75° being what you should aim for. A water heater is helpful for maintaining the correct temperature.

The GloFish betta will be happiest in a tank with a very gentle water flow. The current should be slow so that it does not create too much movement in the water.

The GH, or General Hardness, of the water, needs to be moderate, as the GloFish betta cannot survive in very hard water. The dGH ( degree of General hardness) should be between 5 and 20.

The pH level of the water for your GloFish betta should be between 6.8 and 7.

A blue LED light in the tank will bring out the spectacular fluorescence of your GloFish betta.

This fish will enjoy a few soft plants and one or two rocks or pieces of driftwood in his tank because he likes to sneak into well-hidden places.

The GloFish betta likes to be very active, and therefore it needs space to swim around. A regular fishbowl would not be suitable. A 4-5 gallon aquarium would be the minimum requirement for one GloFish betta.

As long as it has enough room to swim freely, it will be happy and will do well. If you want to put other fish in the aquarium together with your GloFish betta, you will need an even larger tank.

The GloFish betta male is known for his aggressive temperament. Therefore it is recommended to choose tankmates very carefully, in order to avoid it attacking.

A male GloFish betta should not be placed in the same tank as other male betta fish. He will feel obliged to protect his territory by attacking his tank mate.

It is possible to pair a male GloFish betta with a female of the same species, but they should be watched carefully for compatibility.

The GloFish betta can safely be housed with many other species of small freshwater fish. Some suitable tank mates would be fish like cory catfish, ghost shrimp, guppies, and kuhli loaches.

The GloFish betta is an omnivorous fish. Therefore it can be fed small pieces of meaty food, such as bloodworms and dried shrimps. These can be either fresh or freeze-dried.

There are many commercial fish foods available that have been designed to enhance the bright coloring of the GloFish betta. These can also be used quite safely.

A word of caution: take care not to fall into the trap of overfeeding your GloFish betta. This is a small species. It only needs very small quantities of food.

Your GloFish betta should be fed at regular intervals, twice a day. Try to follow a regular feeding schedule, sticking to the same feeding times daily, as far as possible. The GloFish betta is fairly easy to maintain. Like most betta fish care, it does not demand much attention from you. It will thrive in your home aquarium, as long as you provide for its basic needs.

The water parameters should be carefully monitored and maintained at a steady level. If you follow the guidelines given above, your little GloFish betta should be quite happy.

One of the most important requirements that will take up your time is a clean tank. The GloFish betta needs a clean aquarium. It is essential that the aquarium be cleaned frequently, in order to avoid the build-up of algae as well as other harmful organisms.

You will need to ensure that the mineral content in the water is maintained at a steady and balanced level. By using a test kit, you can check the levels of calcium, magnesium, and strontium, as well as other trace elements in the water.

There are many different brands of test kits available from your local aquarium supplies store.

The GloFish betta is usually ready for breeding by the time it is about 6 months old. In order to be able to breed these fish, you need to be able to determine which ones are male and which are female.

When the GloFish is under a blue LED light, if you see a golden stripe across its body, it is a male. A silver stripe is indicative of a female fish.

You should only pair up GloFish that are the same color. Do not attempt to breed two different colors. When matching up two GloFish bettas for the purposes of breeding, the female should be slightly smaller than the male.

Make sure that the food that you are feeding your GloFish betta is of high quality and rich in all the essential elements. This will help to prepare your fish for successful breeding.

Unfortunately, some female GloFish betta will eat their own eggs if your tank does not have the correct environment for breeding.

Prepare your tank for breeding. The substrate should contain gravel with lots of crevices. This will give the eggs a place to settle so that they won’t be eaten by the adult GloFish betta. 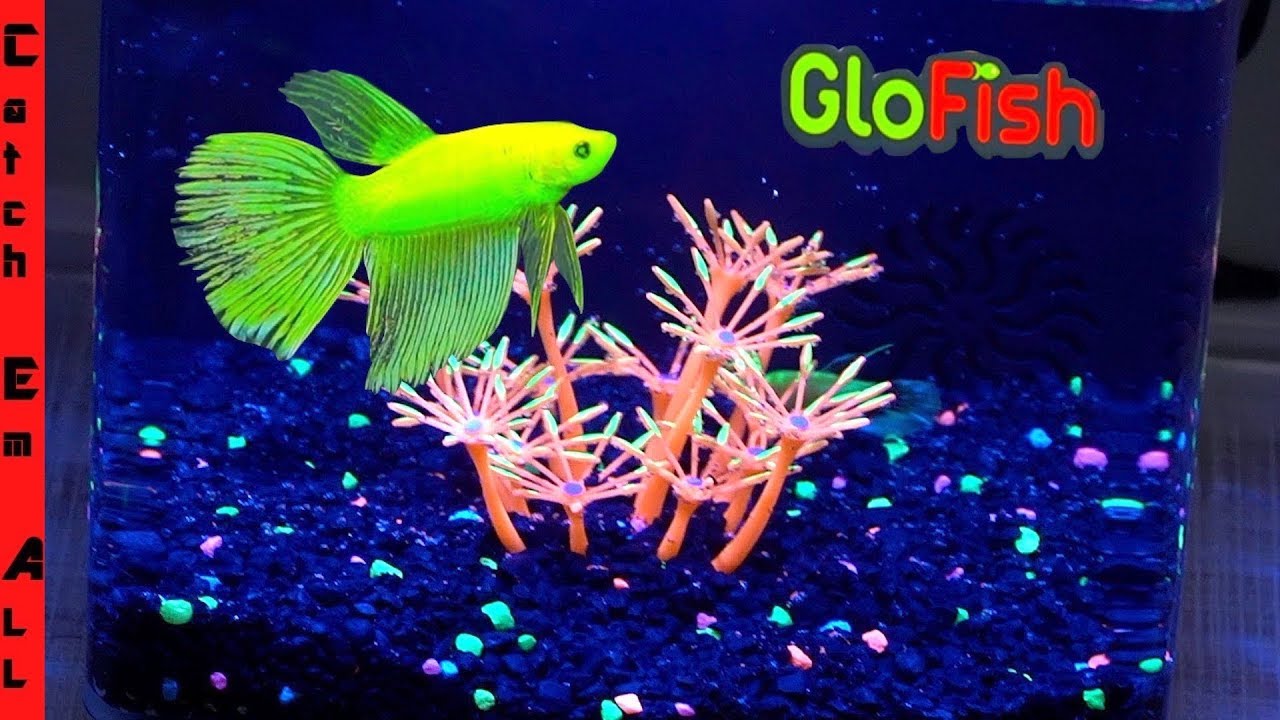 Is the GloFish Betta Suitable for Your Aquarium?

There are certain basic requirements that are necessary if you wish to keep a GloFish betta. While these are not too complicated or difficult to maintain, it is important to follow the guidelines given above.

As long as your aquarium complies with the necessary water parameters and other tank conditions, you can quite easily keep a GloFish betta in your tank. But you will also need to be careful not to add any incompatible tank mates to the aquarium.

The bright colors and spectacular fluorescence of the GloFish betta will make it a wonderful addition to your home aquarium. This bright and colorful little fish will be an interesting talking point for your friends.

November 3, 2017 Robert
About Robert 463 Articles
Robert Woods is the creator of FishKeeping World, a third-generation fish keeper, and a graduate in animal welfare and behavior. He is also a proud member of the Association of Zoos and Aquariums, the Marine Aquarium Societies of North America, and the Nature Conservancy.