Dropsy is the name given to a medical condition that affects many fish, including all varieties of betta. The Betta splendens, also known as the Siamese fighting fish, is a species of freshwater fish that is known for its magnificent bright colors.

Dropsy in betta affects the abdomen of the fish, causing it to swell significantly as a result of water retention. It gives the abdomen an abnormally distended look.

The name ‘Dropsy’ derives from the Greek word ‘hydrops’, which means a swelling of water. It is a somewhat outdated term, and today is often simply referred to as ‘edema’, which means ‘swelling’. In aquarium fish, dropsy is a medical condition that has a serious impact on the health of the fish. It is fairly common in betta, which is a species of freshwater tropical fish.

Dropsy in betta causes abnormal swelling of the abdomen. It gives the fish a bloated look. The name ‘dropsy’ is in fact descriptive of the appearance of a fish suffering from the condition.

When a betta is suffering from dropsy, its belly will look like it has ‘dropped’, and appears to be hanging down. For this reason, this illness in fish is also sometimes referred to as ‘bloat’.

The condition of dropsy in betta usually occurs in fish that have a severely compromised immune system. A betta with dropsy will display numerous symptoms that are all connected to a common cause.

It is very common for an aquarium to contain a variety of different bacteria. Most healthy fish will have sufficiently strong immune systems to be able to fight off these bacteria, and not be adversely affected by them.

However, if a fish is highly stressed, this can cause its immune system to become compromised. As a result, the fish may not have sufficient immunity to fight the bacteria, and infection will set in.

This infection may only affect a single fish, or it can sometimes spread rapidly throughout the tank, infecting all its inhabitants.

Symptoms Of Dropsy In Betta

If your betta’s belly starts to look abnormally distended and swollen, and it looks like it has dropped, this may be the first sign that it is ill. Another very clear indicator that something is not right with your betta is a refusal to eat. A fish that will not eat is usually a sick fish.
If the infection is not diagnosed and treated early, it will progress further. In untreated cases, it will affect the betta’s skin and internal organs. The fish will develop deep lesions on the skin, and it will start to become lethargic.

As the build-up of fluid in the abdomen increases, this will put pressure on the internal organs, affecting their functioning. This will also make the fish look peculiar because the spine will be pushed up, and the fish will develop a much more noticeable curve along its back.

All of these symptoms together put great strain on the fish’s ability to fight the infection. If not treated, eventually, the fish’s entire system will collapse, and it will die.

Signs To Look Out For

It is very difficult to halt the progression of dropsy in betta, and a successful outcome depends largely on early diagnosis and treatment. Unfortunately, some bettas display no early symptoms and suddenly become seriously ill.

One of the uniquely special features of betta, which makes them so popular and appealing, is that they have very bright, prominent colors. If the color of your fish starts to become dull, it could be the beginning of dropsy.

Obviously, you will want to be able to detect the first indication of dropsy in betta. Look out for the following signs and symptoms, and take immediate action if you notice any of these in your betta.

As the disease progresses, these symptoms will increase and intensify. As the abdomen fills with fluid, the scales will be pushed out and will stand up, away from the surface of the skin. This strange appearance is often one of the first really noticeable signs of dropsy in betta.

It is at this stage that intervention is necessary. Early treatment is sometimes successful, but not always. Further on in this article, you will find information on how to treat dropsy in betta.

When the disease reaches an advanced stage, the internal organs, especially the kidneys and the liver, will start shutting down and will cease to function. At this point, there is basically nothing that can be done to save the fish.

What Causes Dropsy In Betta?

Dropsy is a bacterial infection. It is caused by the bacteria known as Aeromonas, a bacteria that is commonly found in many aquariums. It is a ‘gram-negative’ bacteria.

Most tropical fish that are healthy and strong have sufficient immunity to fight off this bacteria. However, if your betta is stressed, this can cause a weakened immune system.

Fish with a compromised immune system will not be able to fight off the bacteria. Once the bacteria take hold in their system, it is very difficult to eliminate.

Why Would A Betta Become Stressed?

Dropsy in betta usually occurs when your fish is stressed. There are numerous factors that could cause stress in a fish. These include:

Bettas do not cope well with sudden, drastic changes in their tank conditions. For this reason, it is recommended to use a water heater in order to maintain a steady water temperature. Sudden drastic fluctuations in temperature could kill your fish.

The water parameters of your aquarium water must be maintained at the correct level. Pay attention to factors such as mineral levels, pH level, and General Hardness of the water. If any of these elements are substandard or out of the normal range, it will make your fish feel stressed, and this could cause dropsy in betta.

Good nutrition is vital for your betta’s well-being. If your fish is not fed high-quality food or does not receive sufficient food, its poor diet could cause it to become stressed.

The male betta is, by nature, a fish with an aggressive temperament. He should not share a tank with other naturally aggressive fish. This will make him think that his territory is being invaded, and he will feel threatened. This can be a major cause of stress, leading to dropsy in bettas.

If you need to transport your betta from the store to your home, this should be done with great caution. Likewise, if you wish to transfer it to a different tank, the move should be made very gradually. The little fish should be introduced to its new environment slowly and gently. A sudden change may cause stress in your betta.

‘Popeye’ is a common illness in fish that causes the eyes to bulge so severely that they look like they are going to pop out of their sockets. The correct medical term for this condition is exophthalmia, which quite literally means out of the eyes.

Popeye is a very common condition in betta, and it can cause the fish to suffer extreme stress. This can sometimes lead to dropsy in betta.

While all of the above can cause your betta to become stressed, a brief episode of stress from any single one of these situations should not cause a drop in immunity that is severe enough to cause the fish to succumb to dropsy.

However, longer periods of exposure to stressful conditions, or a combination of two or more of the above situations, are more of a cause for concern. More than one stressful situation simultaneously, or in quick succession, will more than likely cause the betta’s immune system to fail.

How Do You Treat Dropsy in Betta Fish? It can be extremely difficult to treat dropsy in betta successfully. In order to cure dropsy, it is necessary to eliminate the bacteria that causes the infection, and this is not easy to accomplish.

If you have more than one fish in your tank, it is sometimes necessary to euthanize those fish that are displaying signs of severe infection ( as described earlier in this article ), for the sake of the survival of the remaining fish.

Even if you are not ready to subject the affected fish to euthanasia, they should certainly be removed from the shared aquarium and transferred to another tank to prevent the infection from spreading to the remaining fish.

If the diseased fish are separated and treated early, it is sometimes possible for them to survive, as long as they don’t have any other serious problems at the same time.
Unfortunately, bettas that are also suffering from popeye are unlikely to recover if they become ill with dropsy.

Their immune system will be too low, and they will not be able to fight the bacteria.

As soon as you notice any of your fish displaying one or more of the above signs and symptoms, it is time to take immediate action.

While there are no guarantees of a successful outcome, the above measures will hopefully be sufficient to cure dropsy in betta. 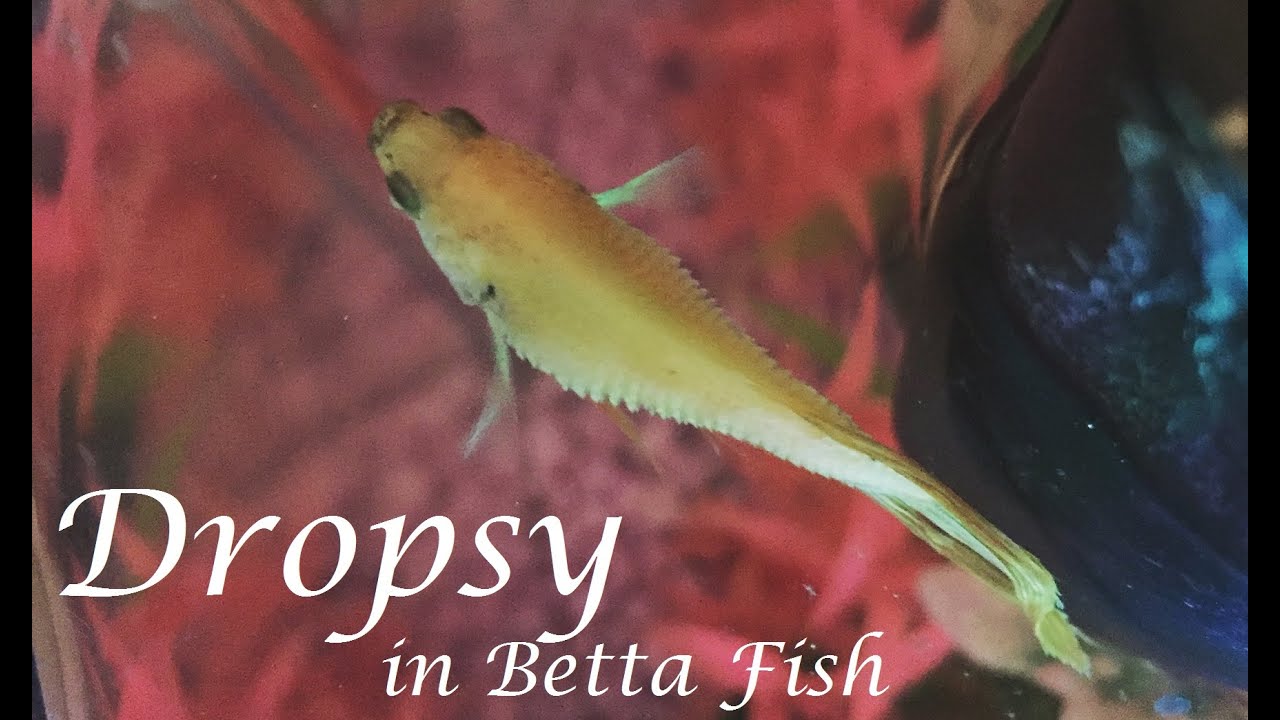 Betta Fish Care: All You Need To Know

August 25, 2021 Robert
About Robert 420 Articles
Robert Woods is the creator of FishKeeping World, a third-generation fish keeper, and a graduate in animal welfare and behavior. He is also a proud member of the Association of Zoos and Aquariums, the Marine Aquarium Societies of North America, and the Nature Conservancy.