Welcome to one of the most popular Shrimps in the aquarium hobby.

For over a decade now Amano Shrimp have captivated hobbyists due to their exceptional ability to consume large amounts of algae.

In addition, their peaceful nature and busy-body personality have helped to sky-rocket its popularity over the last 15 years or so.

If you are considering Amano Shrimp this is the guide for you. We discuss how to care for them, ideal tank mates, dietary requirements, breeding and much more. The Amano Shrimp (Caridina multidentata) is known under a variety of names including:

They were brought to popularity by Takashi Amano, because of their reputation for controlling algae and generally keeping tanks debris free.

Behind the cherry shrimp, it is the most popular freshwater Shrimp in the hobby

Interestingly, because they are incredibly hard to breed, the majority available to buy are actually wild Shrimp.

They are a hardy shrimp that makes it ideal for beginners looking to experiment with invertebrates for the first time.

They should be kept in at least a 10-gallon tank and can be kept in either a species only or community tank.

The tank should be heavily planted and contain lots of hiding places for them (more on that later).

In general, they are very peaceful; however, this all changes when the food comes out.

They will frantically race after the food and generally speaking the largest Shrimp has priority; you will definitely see a ‘pecking order’ here.

Outside of this, you will see them spend most of their time foraging amongst the substrate and plants for leftover shrimp food and debris to eat.

Whilst not exactly a behavior, another interesting observation is when they molt (this generally occurs each month).

When they are without a shell they feel vulnerable and normally go into hiding; this is why a heavily planted tank is a must. They are one of the larger “dwarf shrimp”, and can grow up to 2 inches. However, when buying them they will typically be less than 1 inch in length.

They are easily recognized by their large transparent/greyish colored body.

You will see a long line of red/brown or blue/grey dots running the length of their body; this is how you determine their sex (more on this later).

The coloring of these dots can vary significantly depending on their diet. A Shrimp heavily fed on algae and other greens will have a green tint to their dots.

You will also notice their tail (Uropod) is translucent

Finally, you will also notice that they can mask and blend into your tank incredibly well; they can be very difficult to find when hiding!

Top Tip: to find hidden shrimps shine a spotlight into the tank at night towards the substrate; the shrimp’s eyes will reflect and shine.

Sexing (Tell the Difference between Male and Female)

Unfortunately within the aquarium trade, there are lots of imposters and lookalikes. Whilst many of these imposters look virtually identical you can tell the difference in their algae clearing ability.

There are more than 200 different varieties of Caridina, so you can easily see why much different Shrimp get confused as true Caridina multidentata.

The easiest way to identify imposters is because they are generally lazy don’t make good algae cleaners; real Amano Shrimp are relentless. Imposters tend to be smaller as well.

Finally, they will breed in freshwater aquariums whereas true Amano Shrimp require brackish water to breed.

Unfortunately, it is very difficult to visually identify imposters.

True Amano Shrimp are native to Asia, specifically Japan, China and also Taiwan. They will live in large troupes within freshwater rivers and streams.

As larvae, they require brackish to hatch and survive. It’s only once they mature they will head to the freshwater rivers.

So how does all this translate to setting up your aquarium?

The first thing to note is that your tank should be thoroughly planned. This provides them with lots of shelters and gives them comfort.

You should be using plants such as Java Moss and Green Cabomba.

If you want to add even more hiding places for them you could consider Shrimp tubes. You can also add wooden branches into the tank.

Second, you should only add them to established tanks; debris and algae are crucial for them and this won’t be present in newly cycled tanks.

Finally, as for the substrate, you can use small rocks and pebbles to emulate the river beds of Japan.

They are reasonably hardy inverts and can withstand a wide range of water conditions;

In terms of currents; they are used to this because of their natural environment. A hang on back filter works best for them.

They need to be kept in at least a 10-gallon aquarium. With an aquarium this size, you could keep at least 5 Shrimp in it.

How Many Amano Shrimp per Gallon?

As a good rule of thumb, you can add 1 Amano Shrimp per 2 Gallons. However, it obviously depends on the number, and species, of fish you have in the tank. 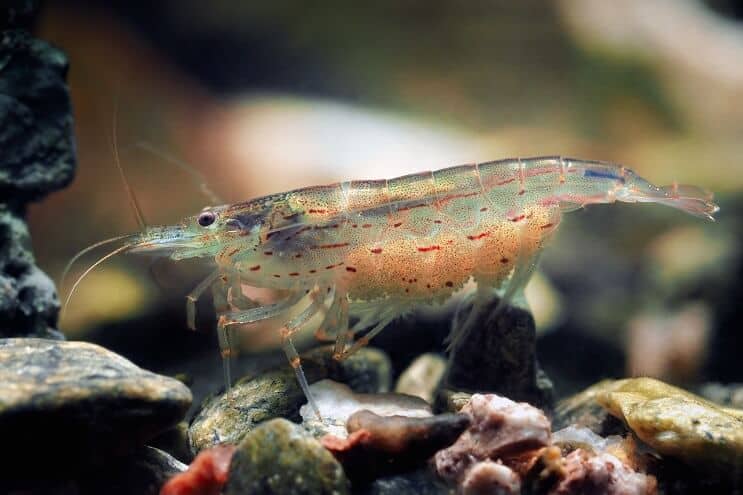 To start with it’s important to know that the Amano Shrimp is commonly viewed as food, so you should always exercise caution when adding them to a tank.

They are an incredibly peaceful species and have no real means to defend themselves.

You should be looking to include peaceful, small to mid-sized, community fish with your Shrimp. The following list of fish typically does well with them:

You should not keep your Shrimp with any large or aggressive fish. The following list will give you a good indication of which types of fish to avoid:

Remember if you are uncertain fall back on the old rule of thumb; “if it can fit in its mouth, then exercise caution”.

If you plan on keeping Amano Shrimp it is recommended that you do not keep them alone. You should keep them in a group of at least 6 to help reduce any dominant behavior.

Also, try to maintain an even ratio of females and males.

They have such a small bioload that you don’t need to worry about overstocking the tank.

In addition to keeping them with their own species, you can also keep them with other peaceful Shrimp such as Cherry Shrimp and Ghost Shrimp.

If you didn’t already know, Amano Shrimp are famous for feeding on algae.

They are known as being one of the best cleanup crews in the hobby and will devour plant debris, leftover food, and algae. They have also been known to eat dead fish.

Unfortunately due to their reputation, many people believe that they only need algae and leftovers to survive, this is not true.

They will always need their diet supplementing. Obviously the more amounts of algae and debris in the tank for them to graze on, the less supplementing they will need.

They are actually omnivores, so will eat both meat and plant matter.

The core of their diet should consist of a high-quality pellet or algae wafer. However, you can also feed them on sinking pellets, frozen foods, and vegetables.

They will eat cucumber, squash, zucchini, and spinach to name a few.

Just remember though, the vegetables should be blanched and don’t leave them in the tank for longer than an hour because it will start to contaminate the water.

In terms of frozen snacks, think of the usual: bloodworms and brine shrimp.

Just like Cherry Shrimp, you should avoid placing anything with Copper into the tank; it is toxic to most invertebrates. Be sure to check the labels as many fish food and medication contains Copper.

Also, you should avoid placing them in a tank with black beard algae; they will not eat this.

As previously discussed sexing them is fairly easy; however, attempting to breed them is anything but easy. They are incredibly difficult to mate and I’ve yet to hear from anyone that has successfully hatched the larvae and raised them into adults.

This is mainly due to the brackish water problem mentioned above (more on this later).

In the wild, the male will fertilize the eggs and the female will carry them for around six weeks. During this time, the female can often be seen wafting her tail to push oxygen over the eggs; similar to the Cherry Shrimp.

At the six week mark, she will release the larvae into brackish water. As larvae, they require salt water and as they mature and grow they need fresh water.

Remember adults should not be placed in brackish water; even a small exposure to salt can kill them.

It’s at this point you should remove the adults from the breeder tanks as you increase the salinity of the water.

Due to the limited success stories of breeding them, no more information could be found on breeding Amano Shrimp; this really is only an endeavor for the most experienced fish keepers.

If you are looking to breed Shrimp we would suggest you look at either Cherry or Ghost Shrimp.

Those very few success stories that we have heard of, breed these shrimp in full strength saltwater with a salinity level of around 1.024. Amano Shrimp are one of the hardiest and least demanding inverts in the freshwater aquarium hobby.

They can be kept both in a single species tank, or you can keep them with ghost or cherry shrimp.

Fortunately, because of their hardy nature, they don’t require much specialist care.

One of the biggest things you need to pay attention to is cooper. Avoid adding any copper into the tank as this is highly damaging to all invertebrate.

They are also surprisingly resilient to ammonia spikes; however if at all possible avoid rapid any pH or temperature drops.

You should pay special attention to them when they molt; this is when they are most vulnerable. You should expect them to shed monthly if they are well fed and feel secure.

When kept in an aquarium they should live between 2-3 years. They are most likely to die young as soon as they are added to a tank. So if they survive the first few weeks in your tank they should live a long life.

Is the Amano Shrimp Suitable for your Aquarium?

Now you know why Amano Shrimp are the most prized inverts within the aquarium hobby.

They are tireless workers, help keep your tank algae free and are also great community tank members as they are compatible with lots of peaceful fish.

In addition their resilient and hardy nature makes them perfect for people looking to try invertebrates in their tank for the first time.

After reading this guide you should now feel comfortable enough to know if Amano Shrimp are the right shrimp to put into your tank.

Do you have any questions about keeping Shrimp? Let us know in the comments section below

October 16, 2020 Robert
About Robert 468 Articles
Robert Woods is the creator of FishKeeping World, a third-generation fish keeper, and a graduate in animal welfare and behavior. He is also a proud member of the Association of Zoos and Aquariums, the Marine Aquarium Societies of North America, and the Nature Conservancy.