The halfmoon betta is a beautiful freshwater fish that’s part of the greater betta fish family. It has strikingly bright colors and exceptional half-moon-shaped fins. The halfmoon betta is a much-loved species of freshwater fish. Part of its appeal is its magnificent coloring, which makes it stand out from many other fish.

The scientific name of the halfmoon betta is the Betta splendens. It is also sometimes commonly referred to as just the betta. It belongs to the family of Osphronemidae. These are all freshwater fish.

The name halfmoon is descriptive of the shape of its tail, which is a kind of semi-circle.

The halfmoon betta has a labyrinth organ. This gives it the ability to breathe while on the surface of the water, unlike most other species of fish, which can only breathe underwater through their gills.

The male of the species is known to be highly aggressive. He will instinctively attack any other fish of the same species. For this reason, it is sometimes also called the Siamese fighting fish.

The halfmoon betta is native to certain areas of Southeast Asia. It is commonly found in vast areas of Thailand, Cambodia, Indonesia, and Vietnam. In many of these places, this species of fish is popular as a pet.

The male halfmoon betta is known to be highly aggressive. He will typically attack any other male bettas that appear to be invading his territory. He may tolerate females of the same species for a brief period of time.

Halfmoon bettas are often seen as solitary fish. They enjoy their own company and are often happiest when they have the tank to themselves.

This does not mean that they cannot be housed together with other fish in a shared aquarium. They can, but it is important to choose their tank mates carefully and to give careful consideration to what other fish to place in their tank.

If your halfmoon betta holds his fins open, allowing them to wave freely in the water rather than keeping them stiff and taught, it is an indication that your fish is content and happy.

If your betta’s fins are taught and stiff, it is possibly a sign that it’s feeling stressed and under threat from other fish in its tank. This could mean that he is getting ready to attack.

When your betta is feeling relaxed and happy, it will be quite placid and will swim around gently, smoothly, and calmly.

However, if your halfmoon betta is swimming very fast, and frantically racing around the tank, bumping into other things, or hitting its nose against the bottom of the tank, it is most likely feeling stressed and anxious.

The halfmoon betta is sometimes able to recognize its owner and will know that when it sees you it is about to be fed. This may make your betta suddenly start swimming more energetically, and coming up to the surface of the water. The shiny colors of this species are almost gem-like in their brightness. They are found in a wide range of colors, such as bright blue, red, glimmering green, shimmery orange, and even shades of purple.

The males of the species generally have more vibrant colors, while the coloring of the females is not quite so bright.
Do not be too surprised if you notice that your halfmoon betta starts changing color. However, this could be a cause for concern. These fish sometimes lose their bright, vivid colors when they are stressed or ill.

Occasionally one might find a white halfmoon betta, but these are quite rare. However, even rarer is the albino halfmoon betta. This fish has absolutely no pigmentation whatsoever.

The albino halfmoon betta has colorless scales that are almost transparent. The skin is shimmery pink, while the eyes are pink or red.

The reason for this fish being named the halfmoon betta is related to the shape of its tale. The semi-circle, fanned out in all its glory, resembles the shape of a half-moon.

The halfmoon betta is native to the rivers and marshes of Southeast Asia and does not do well in extreme water temperatures. The water in its natural habitat is never either very warm or very cold.

Because the waters of its natural environment are slow-moving with a very gentle current, this species of fish do not enjoy tank conditions with rapid water movement or strong currents.

In order to keep your halfmoon betta content and comfortable, the water parameters in the aquarium should all be kept at a moderate level.

Water should be neither too warm nor too cold. The temperature should be maintained at between 72° and 81° Fahrenheit, with an average temperature of about 75° being ideal.

You may want to consider buying a water heater, in order to keep the water temperature constant. These are available at all aquarium supply stores.

While the halfmoon betta may be able to survive slightly colder water, it will make him lethargic and less active. It may also make him more likely to get sick.

The halfmoon betta enjoys calm water, without rapid movement or a strong current. The water flow should be kept to a minimum level. Maintain a gentle current that will not agitate the water too much.

The GH, or General Hardness, of the water, should be kept at a moderate level, as the halfmoon betta does not tolerate extremely hard water well. They prefer soft water and will thrive in water with a dGH ( degree of General hardness) level of between 5 and 20.

The pH level of the water should also be kept at a moderate level, with a reading of between 6.8 and 7.5. The halfmoon betta will not survive in water that is either heavily acidic or with a very high alkaline level.

The halfmoon betta likes soft, gentle lighting. It is advisable to put a light in the tank, with the brightness not being too intense. This species also enjoys plants in its tank, and these will need some light in order to survive.

The plants should be of a soft variety, in order to avoid harming your halfmoon betta’s delicate fins.

The halfmoon betta enjoys hiding away in concealed spaces, so it is a good idea to put a few rocks in the tank. He will hide behind them and in their crevices. However, it is important to ensure that the rocks do not have sharp edges.

The halfmoon betta is an active species, and therefore it needs a fair amount of space. It will not survive in a regular fishbowl. It needs a tank with a minimum of 4 gallons for a single fish.

This will give it sufficient space to swim around, and it will thrive. If you have other fish in the aquarium together with your halfmoon betta, it will need even more space. It likes to keep to itself and does not enjoy being in an overcrowded tank. The male halfmoon betta tends to have an aggressive nature, so it is advisable to be extremely cautious when selecting tank mates for this species.

If he thinks that his territory is being invaded by others of the same species, the halfmoon betta will attack. Therefore it is not recommended to place more than one male halfmoon betta together in the same tank.

A male halfmoon betta will tolerate a female of the same species, but not for long. He will possibly eventually turn on her. For this reason, they should be placed in separate tanks after mating.

The halfmoon betta will get along quite well with many other species of small freshwater fish. Cory catfish, ghost shrimp, guppies, and kuhli loaches will all be compatible with the halfmoon betta.

The halfmoon betta is a carnivorous species. Therefore it will enjoy any small pieces of meat. Bloodworms and live brine shrimp are both highly suitable foods for these little fish.

While feeding live meat is the first choice for this species, they will also eat freeze-dried bloodworms and other meaty fish foods.

They will also enjoy eating things like mosquito larvae and small pieces of dried shrimp.

You may be wondering how often to feed your halfmoon betta. Do not fall into the trap of overfeeding your fish. Overfeeding could have disastrous consequences, and may even kill your fish.

They only need very small amounts of food, but on a regular basis. These fish thrive on a regular feeding routine. They should be fed twice a day, once in the morning and once in the evening.

Try to keep to the same routine in your feeding schedule every day, with feeds approximately 12 hours apart.

The halfmoon betta is not a difficult species of fish to care for and requires only basic betta fish care. It does not require serious attention from you, as long as its water parameters are correctly maintained as per the above guidelines.

Like most other aquarium fish, the halfmoon betta needs a clean aquarium. We advise you to clean the tank regularly, to avoid the build-up of algae as well as other harmful organisms.

It is important to ensure that the mineral levels in the water are steady and balanced. The levels of minerals such as magnesium, calcium, strontium, and trace elements should be checked regularly.

This can be done using an aquarium water testing kit. These are readily available from aquarium supplies stores.

The ideal time for breeding the halfmoon betta is when they are between 4 months and 1 year old. This will give you a better chance of success at breeding.

These fish are unlikely to mate in the presence of other species in their tank. It is better to separate them from all other fish and to place them in their own tank, for the purposes of breeding.

When pairing up two halfmoon bettas for breeding, the male should be very slightly larger than the female. When the female is ready to mate, her color will become darker and she will develop clearly visible stripes down the middle of her body.

You will also know that she is ready to mate by the fact that her ovipositor becomes easy to see. It will appear as a white spot between her fins. She will display flirtatious tendencies towards her mate by flaring her tail and waving her whole body towards him.

Unfortunately, some female halfmoon betta will eat their own eggs, preventing successful breeding. If your fish has this tendency, then there really is very little that can be done to prevent her from doing this. 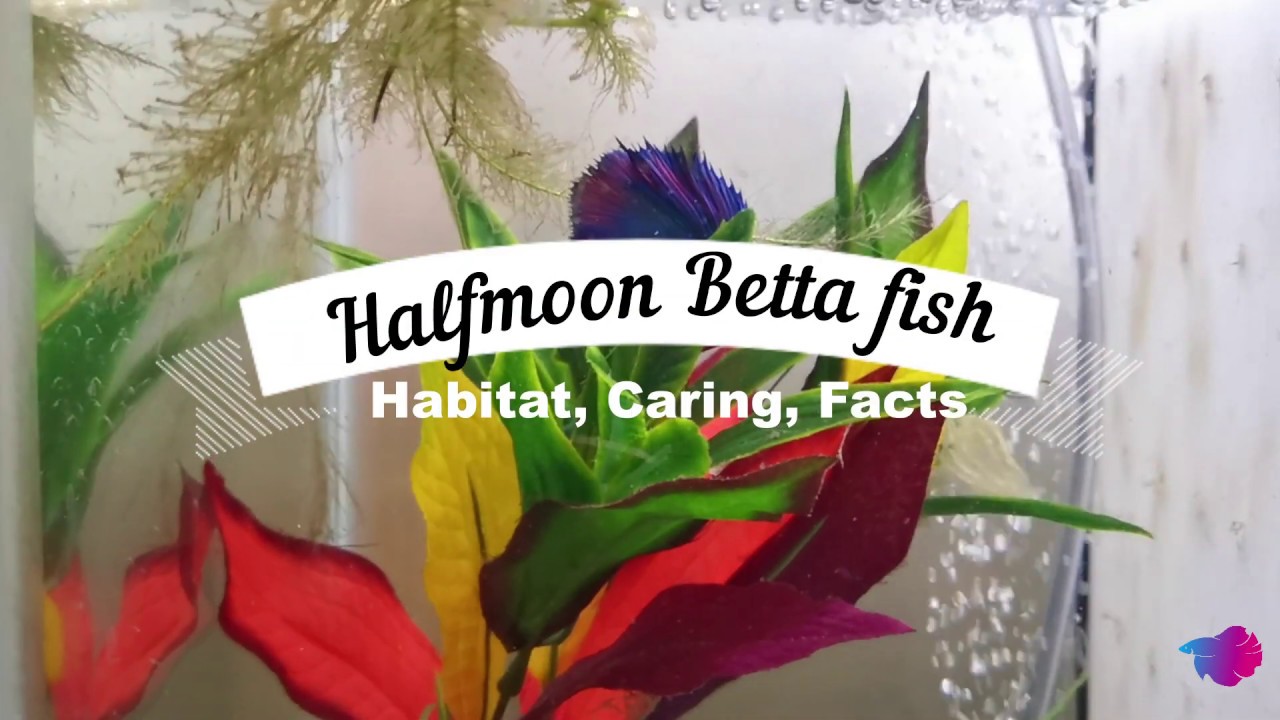 Is the Halfmoon Betta Suitable for Your Aquarium?

Although the halfmoon betta is not too complicated to maintain, it does have certain requirements. If you follow all of the guidelines above, especially with regard to water parameters and tank conditions, the halfmoon betta should do very well in your home aquarium.

This spectacular-looking fish, with its bright colors, will be a wonderful addition to your tank. As long as your freshwater aquarium has enough space, and there are no other fish in it that would be incompatible with the halfmoon betta, there is no reason why you should not put one of these special little fish in your aquarium.

August 25, 2021 Robert
About Robert 394 Articles
Robert Woods is the creator of FishKeeping World, a third-generation fish keeper, and a graduate in animal welfare and behavior. He is also a proud member of the Association of Zoos and Aquariums, the Marine Aquarium Societies of North America, and the Nature Conservancy.