It can be difficult to choose which betta fish you want for your aquarium because they all are attractive possibilities.

A black orchid betta is a bold option with its dark colors and large crown-like fins.

They may be aggressive, like all bettas, but there are ways to deal with this. Even beginners can have success caring for these fish. They are hardy and undemanding once their aggression is under control. Bettas (Betta splendens), or Siamese Fighting Fish, come in lots of different varieties. They have been selectively bred to the point where you can get virtually any colors or patterns you want for your aquarium.

The black orchid betta stands out for its bold dark coloration and large spread-out fins.

They are members of the Osphronemidae family, which contains all bettas and other famous members, such as gouramis and paradise fish.

This species comes from Asia, where it lives in the slow-moving freshwaters of Thailand, Vietnam, Cambodia, and Laos.

There isn’t much oxygen in these areas, so bettas have evolved a “labyrinth organ”, which lets them take oxygen from the air when their gills aren’t getting enough from the water.

If you want a black orchid betta, you may have to look around for a while. Most pet stores do not stock them, since they are only bred in certain areas.

A black orchid betta will live to be three years old if you keep it in a healthy environment.

To have the best chance of them reaching this age, ensure that you are buying a healthy fish, to begin with. Shop elsewhere if you spot any signs of disease or injury.

These might be apparent in their bodies or through their behavior.

Black orchid bettas are territorial and will fight to defend their personal space.

Keeping them singly is recommended since they are almost certain to fight with their own kind, especially males.

They can be kept in a peaceful community if you pick the right tank mates (more on this later).

If you spot your black orchid betta heading up to the surface, that is them using their labyrinth organ to get oxygen from the air. It may be a sign that the water quality is low, but not necessarily. Black orchid bettas are characterized by their black coloration across their body and fins. This is accented by an iridescent blue that streaks across their scales.

Most aquarists purchasing a black orchid betta will get a mix with a crowntail betta. This mix is a very popular type. They have large fins with long spiky extensions, creating a crown-like appearance.

The extensions could potentially make the fins 2-3 times longer than the body, which reaches 3 inches when fully grown.

It is easy to distinguish between males and females. Males look more majestic overall, with bolder colors and more extravagant fins. Bettas are found throughout Asia, most notably in Thailand where they are the country’s national fish. They are also commonly seen in Laos, Vietnam, and Cambodia.

They inhabit slow-moving tropical freshwater, places like river basins and rice paddies. These are low-oxygen environments, so having a labyrinth organ is important.

There would also be plenty of live plants living in the warm water.

The more closely you can replicate this natural environment, the happier your black orchid will be, and the longer they should live.

Use a sandy substrate to plant a variety of live plants in the tank. These offer shelter and oxygenate the water.

Use decorations to create caves for your black orchid betta to claim and retreat to when stressed or sleeping.

Keep an eye on how much the water is moving. A powerful heater will create too strong of a current for fish that are used to nearly still water in the wild.

If you are just keeping a single black orchid betta with nothing else in the tank, then a 10-gallon aquarium should be fine.

If you want a small community of peaceful fish too, you’ll need a bigger tank, since the addition of other fish will make the betta more aware and more defensive of its territory.

Having an aggressive fish like a black orchid betta is always going to cause compatibility problems. There are many suitable tank mates for if you want a community aquarium though.

Beginners should keep one black orchid betta on its own in a tank to keep aggression to an absolute minimum. Aquarists with some more experience can add some peaceful shoaling species.

Some good examples include Danios, Mollies, Tetras, and White Cloud Mountain Minnows. You could add Corydoras Catfish to fill the lower regions of the tank or even use some invertebrates, like cherry shrimp.

Avoid aggressive species that might provoke your betta and cause fights. Steer clear of infamous fin-nippers as well, as these could easily become a problem for a black orchid’s large fins.

Can You Keep Black Orchid Bettas Together?

It is unwise to keep more than one black orchid betta in an aquarium, they will fight regularly. Males will do this until there is only one of them left.

The only situation where you should have multiple individuals is when you are trying to breed a male and female.

Females are calmer than males, so if you must keep multiple black orchid bettas, keep a small sorority of females. Females can still be aggressive and fight though.

However, diseases can affect any fish even in the best circumstances. Black orchid bettas can develop many freshwater diseases, such as fin rot and ich.

Luckily, there are many medications available from pet stores to treat these. Move your betta to a quarantine tank until treatment is complete.

Pathogens survive and multiply best in poor water conditions, so keeping the aquarium clean is a great way to prevent disease.

Keep algae levels down and perform partial water changes each week to prevent the build-up of pollutants.

Using a water testing kit every week is a great week to spot any changes in the water conditions as soon as possible.

Sometimes you cannot prevent disease. Injuries can make a fish prone to getting ill; unfortunately, black orchid bettas can easily pick up an injury by fighting.

All bettas are carnivorous and would eat lots of meaty foods in the wild. This would be whatever they came across, such as insect larvae, worms, and small fish.

It is important that they are given lots of protein in their diet. The best way to do this is to give them live/frozen foods, as these are packed with nutrients.

If you want to use flake or pellet foods, make sure they are supplemented. Dried foods like these lose most of their nutrient content whilst being manufactured.

The healthiest diet is a varied one, so mix things up when you can.

Give your black orchid betta an amount of food that they can finish within two minutes. They will greedily consume any extra food, leading to overfeeding and bloating.

Breeding betta fish is tough and will require you to focus your efforts on it.

It can take a few weeks of preparation because you need to condition the male and female separately before introducing them.

To condition them, feed each of them high-quality foods for a couple of weeks. Do this 2-4 times a day to give them the energy they need for mating.

An important part of their mating routine is their bubble nest. You may spot your male black orchid betta building these regularly, but some fish only make one when they are ready to mate.

Once the mating pair has courted, the female will release her eggs. The male will gather them up and transfer them to the bubble nest. He will guard them until they hatch, which takes a few days. 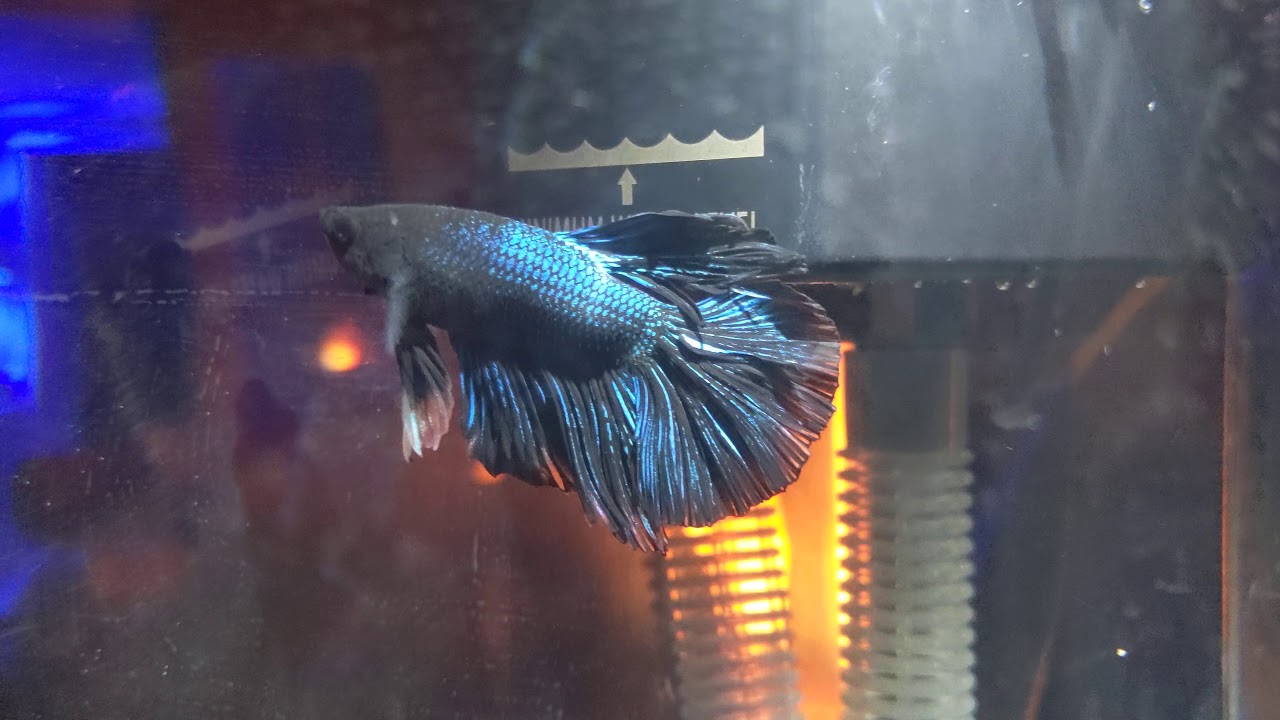 Are Black Orchid Bettas Suitable for Your Aquarium?

Anyone can look after a black orchid betta. The composition of your tank will vary based on your experience level, but the fish themselves are hardy and have simple needs.

Aggression is the main issue that people have, but this can be mitigated or avoided altogether by keeping them as the sole member of the tank.

Black orchid bettas are a spectacle in your tank and their fiery personality only makes them a more desirable addition to your aquarium.

Why do you like Black Orchid Bettas? Let us know in the comments below…

Warning: DOMDocument::loadHTML(): Unexpected end tag : p in Entity, line: 59 in /home/customer/www/fishkeepingworld.com/public_html/wp-content/plugins/cas/classes/Machine.php on line 727
About Robert 468 Articles
Robert Woods is the creator of FishKeeping World, a third-generation fish keeper, and a graduate in animal welfare and behavior. He is also a proud member of the Association of Zoos and Aquariums, the Marine Aquarium Societies of North America, and the Nature Conservancy.