Marine fish can be found in all colors of the rainbow. If you’re looking for something purple, there is no better option than the Orchid Dottyback.

This species will immediately grab your attention with its bold purple color.

They sometimes display aggression, but this is easily manageable, so even beginners should be able to care for these fish.

This article covers all the important information when it comes to Orchid Dottyback care. We’ll discuss their ideal environment, compatibility, diet, and much more… 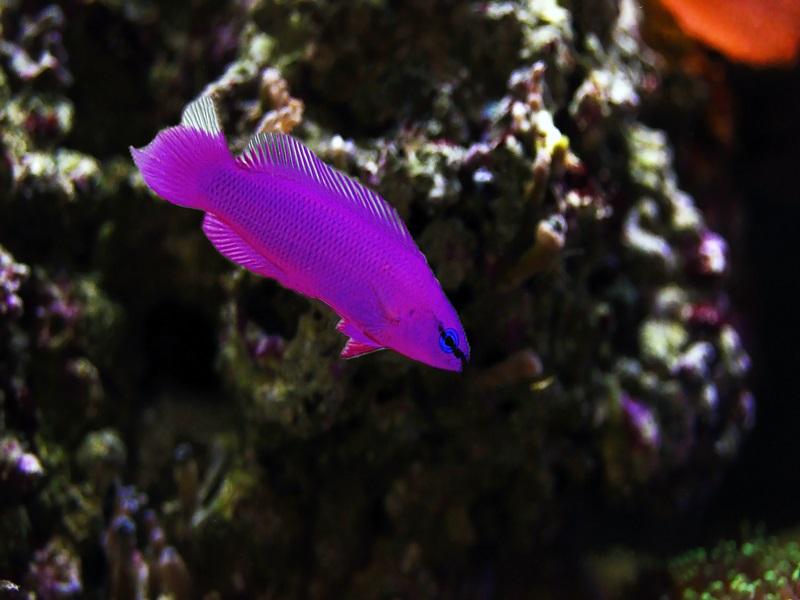 The Orchid Dottyback, or Fridman’s Dottyback, is a marine fish in the Pseudochromidae family, which contains all the Dottybacks.

They are known scientifically as Pseudochromis fridmani, which is a reference to David Fridman, who first discovered the species.

These fish are endemic to the Red Sea, where they live up to 200 feet deep on reefs. They hide in small cracks and caves formed by rocks and corals.

Most specimens in the aquarium trade are captive bred and could cost from $30 to $60, so make sure you check that the fish are healthy before purchasing.

They should live between 5 and 7 years in a stable environment. Though there are easier marine fish to care for, beginners will be able to look after Orchid Dottybacks if they have done their research.

When first added to the tank, these fish will be shy, hiding away between rocks. Over time they will become more confident and even aggressive when they feel they need to defend their territory.

By providing lots of hiding spots, aggressive displays will be infrequent.

Most of the time Orchid Dottybacks will stay close to the decorations in the tank, rarely venturing to the surface except at feeding times. 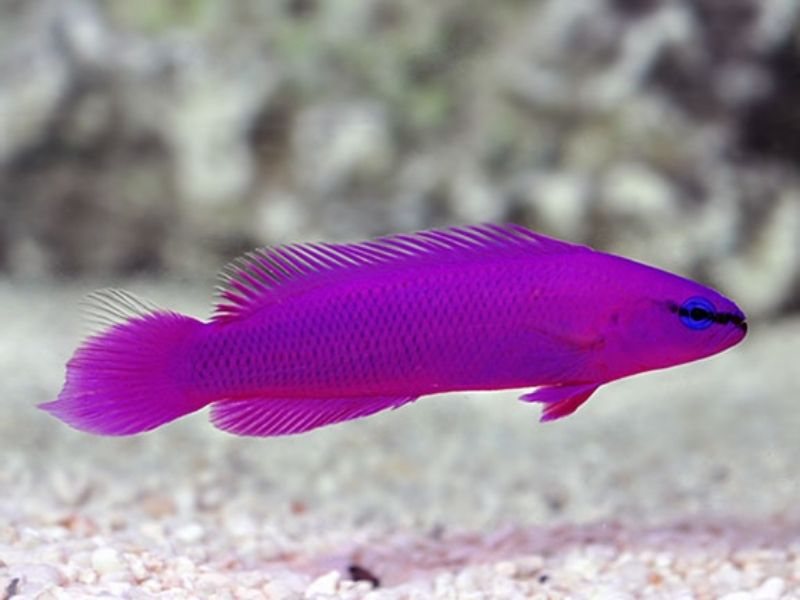 Orchid Dottybacks stand out in any aquarium with their intense purple coloration. It covers their entire body and all their fins.

Some individuals are fringed with red on the top and bottom of their bodies.

The only other notable feature is a short black stripe that runs from their mouth back through their eye.

Their body is thin and long, though they only reach a maximum size of 3 inches. Their dorsal fin runs from just behind their head to their tail.

Sexing these fish is very difficult by eye.

Orchid Dottybacks are very attractive and sure to bring plenty of color to your aquarium. 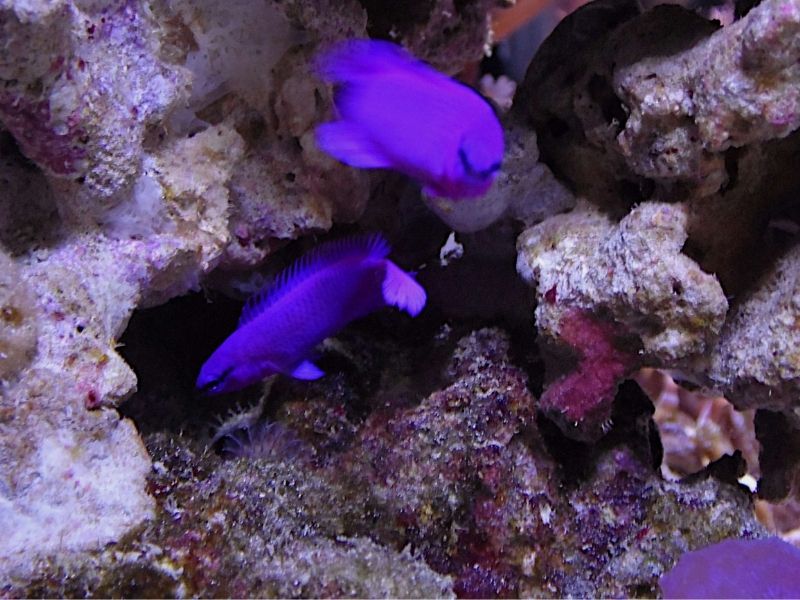 Wild Orchid Dottybacks are only found in the Red Sea. They live on reefs, spending most of their time in or around rock formations, which offer lots of shelters.

To create the perfect aquarium, you must replicate their natural habitat as best as you can. This is easy to do since their needs match many other popular saltwater fish.

Start with a fine-grained layer of sandy substrate or crushed coral.

You can then use live rocks to create a series of caves and crevices for these fish to swim around. They may offer great shelter and provide a territory for them to claim.

Having lots of caves in your aquarium is key to minimizing aggression.

You can have corals in the tank too, Orchid Dottybacks will leave them alone.

The water should have a slight current and be moderately lit.

This species is small, but they need enough space to claim a territory and not have to defend it all the time. A 30-gallon tank is recommended, but bigger tanks are always better. Orchid Dottybacks can be aggressive and territorial when other fish get too close for comfort, but this shouldn’t be a problem in a large tank with many hiding spots.

Tankmates should not be timid though, so they can defend themselves if an angry Orchid Dottyback comes their way.

You should take note of how big any tank mates will grow. Orchid Dottybacks are only 3 inches and could easily be eaten by larger fish like a Lionfish.

These fish are considered reef safe; they won’t damage your corals.

Can You Keep Orchid Dottybacks Together?

Keeping Orchid Dottybacks together will increase the risk of fighting.

It is safest to keep them singly, but they can be kept in pairs if the tank is large enough with lots of separate caves throughout.

You can feed Orchid Dottybacks most foods. They are primarily carnivorous, but they will eat whatever they come across.

You could provide some dried foods like flakes and pellets, but these are never as nutritious as live/frozen foods. Try giving them brine shrimp, Mysis shrimp, and other chopped meaty foods.

Varying the diet when you can is the best option; they’ll receive a variety of nutrients. This helps to maintain vibrant colors too.

Day-to-day care of Orchid Dottybacks is easy. They just need a healthy diet and a well-maintained aquarium, which is always important for aquarium pets.

Keep the tank clean and perform regular partial water changes. Use a water testing kit each week so you can spot any unwanted changes in the water parameters and soon as possible.

Common saltwater diseases are a possibility with Orchid Dottybacks, but they aren’t particularly prone to picking them up. Disease should be rare in a clean aquarium.

If you do notice that something is wrong then separate the infected fish in a quarantine tank for treatment, only returning them once treatment is complete.

Captive breeding is becoming more common and lots of aquarists are now having success at home. Most Orchid Dottybacks on sale are now captive bred which has reduced their price.

If you have a pair, then spawning should happen regularly in a healthy aquarium. You will need to maintain the perfect water conditions and supply a highly nutritious diet.

The male will court the female. If accepted, the female will deposit her eggs in the male’s territory for him to fertilize.

The male will care for the eggs until they hatch to release larvae after 4-5 days. At this point, separate the parents and raise the young on their own.

Are Orchid Dottybacks Suitable for Your Aquarium?

If your favorite color is purple, then Orchid Dottybacks are perfect for you, though everyone can enjoy their majestic purple color.

The preferences of this species are pretty standard for marine fish and they can live alongside corals, so they should be fine in most setups. There are just a couple of things to consider.

Tankmates cannot be large enough to eat an Orchid Dottyback, but they should be able to defend themselves from any signs of aggression.

You need lots of hiding spaces for an Orchid Dottyback to claim as a territory and keep aggression as low as possible.

Orchid Dottybacks are attractive little fish that add interest to every aquarium they’re kept in.

Have you got Orchid Dottybacks in your aquarium? Let us know about your setup in the comments below… 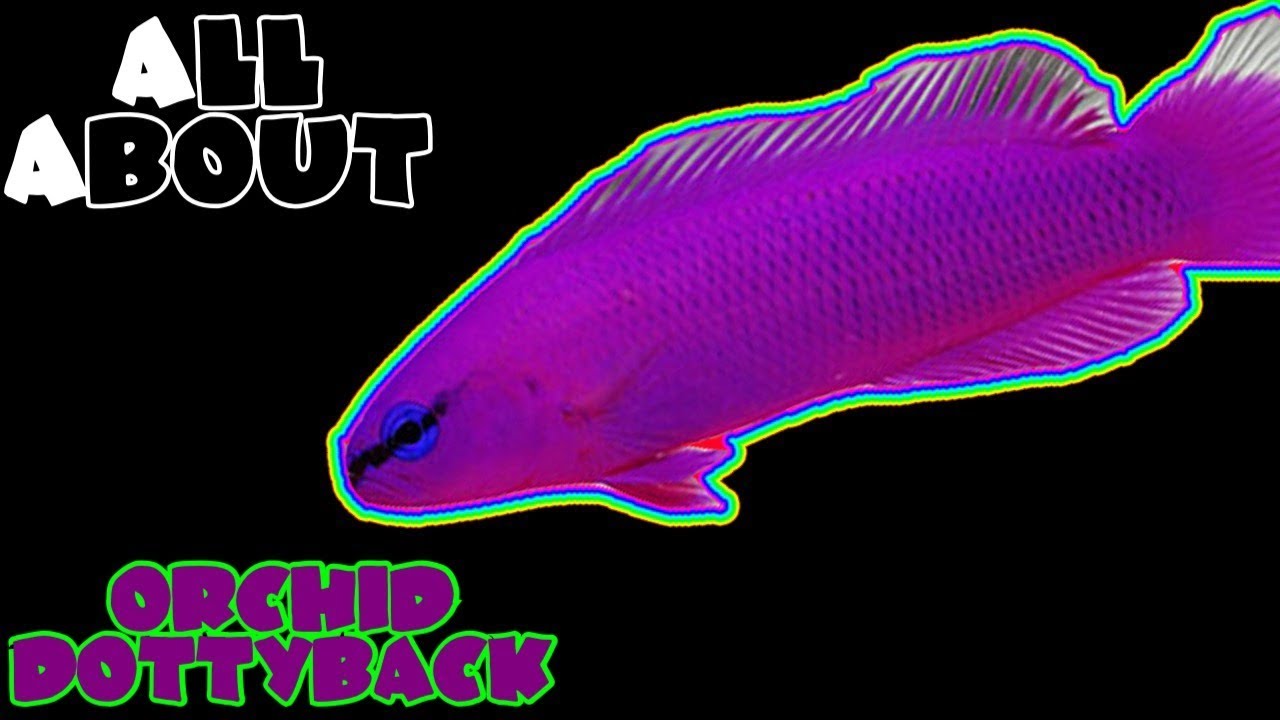 December 16, 2020 Robert
About Robert 454 Articles
Robert Woods is the creator of FishKeeping World, a third-generation fish keeper, and a graduate in animal welfare and behavior. He is also a proud member of the Association of Zoos and Aquariums, the Marine Aquarium Societies of North America, and the Nature Conservancy.

Mandarin Fish (Mandarin Dragonet) Care Guide: The Most Mesmerizing Fish In The Ocean