Bristle worms are a marine species and may be a good addition to a reef tank because they aren’t poisonous and consume the leftover materials that would otherwise decompose and produce harmful ammonia. However, there are some bristle worms that can be dangerous, and that attack and may kill other small fish in the aquarium.

What Is a Bristle Worm? Bristle worms are from the polychaeta class of segmented worms and can grow up to 24 inches in length if the aquarist doesn’t notice them in the tank. When bristle worms first appear in the tank, they are as small as 1.5 inches and are hard to see. Bristle worms are also nocturnal creatures, which means they only come out at night when the light is off in the aquarium. Fireworms are a type of common bristle worm considered dangerous for saltwater fish tanks. Fireworms are pink or orange and have white and red bristles.

For example, the bearded fireworm, belonging to the family Amphinomidae, is dangerous for reef tanks. This predator attacks and may kill healthy inhabitants such as small reef fish and corals. The bearded fireworm is much unlike the common bristle worm, which may consume dead fish.

How to Identify Bristle Worms (& Where They Come From)

The bristle worm has a long, segmented body covered by hair-like bristles that protect the animal from predators. If these worms have a good diet in the tank, they can grow up to 24 inches long. Baby bristle worms are as small as 1.5 inches long.

Bristle worms can be unknowingly introduced to a reef tank on new, living rocks. The worms easily go unnoticed because they hide in small cracks and only go out at night. 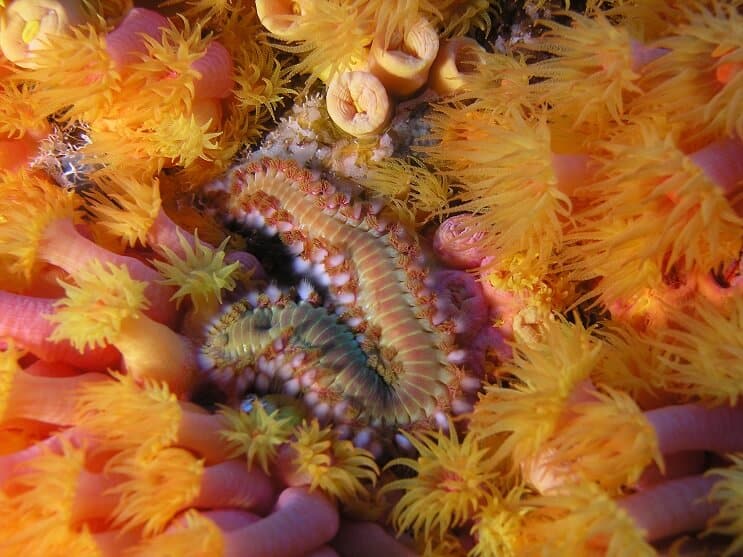 These marine worms can be dangerous for humans because the worm’s bristles cause severe skin irritation that lasts for several hours. Removing bristles that stay in the skin requires using tweezers and applying hydrocortisone.

Bristle worms are slow nocturnal creatures that tend to live at the bottom of the tank. They hide under rocks during the day and come out at night.

Other polychaetes that are more aggressive, such as Bobbit worms or bearded fireworms, tend to display predatory behaviors. Bobbit worms are ambush predators that hide in the sand at the bottom of the fish tank and strike with their mouths at passing prey. A bearded fireworm is likely to feed on the corals or hunt fish by using its venomous chaetae to inject toxins into the prey’s body.

Getting Rid of Bristle Worms Sometimes the best way to remove bristle worms from the aquarium is to introduce natural predators that will eat the worms. However, some predators that feed on polychaete worms might also eat small crustaceans and other tank inhabitants. Most carnivorous fish won’t eat bristle worms since the worms only come out at night when most fish are asleep.

Great natural predators for bristle worms and fireworms include:

A bristle worm trap is useful to remove the worms from a tank while avoiding the worm’s bristles. Various bristle worm traps can be purchased in aquarium fish stores and online or made at home.

To make a bristle worm trap at home, recycle an empty plastic bottle by removing all paper or plastic packaging. Cut three small, round, offset holes on two opposite sides of the bottle, big enough for a plastic straw to fit in.

Cut three plastic straws in half and stick them through the holes in the bottle. Add some bait, like small pieces of meat, to the bottle. Place the bottle trap inside the aquarium, ensuring that the outer ends of the straws touch the substrate. The worms should be in the trap within a day.

Conclusion: Should You Remove Bristle Worms?

The following section provides some answers to the popular questions about bristle worms in a reef tank:

No, most bristle worms are not harmful. Bristle worms keep the tank cleaner by consuming ammonia-producing materials, which can be harmful to fish. However, some types of bristle worms, like fireworms, can be detrimental to the tank because they hunt down and kill fish and other non-fish members of the tank.

What Happens if You Touch a Bristle Worm?

If you touch a bristle worm with bare hands, you’ll likely experience skin irritation and unpleasant sensations for a long time.

How to Treat Bristle Worm Stings?

Treating bristle worm stings requires carefully removing the bristles with tweezers and applying hydrocortisone to the affected skin three times a day until the inflammation subsides. If symptoms of infections are persistent, including heat, severe itching, or swelling, consult a doctor.

Will Bristle Worms Hurt My Fish?

No, most bristle worms can’t hurt coral. Most of these worms only feed on the materials they find at the bottom of the tank. However, carnivorous bristle worms, like fireworms, target corals alongside other tank mates. Fireworms have bristles that release toxins into their victims, causing pain and damage to coral.

Do All Reef Tanks Have Bristle Worms?

Yes, almost all reef tanks have bristle worms. Getting rid of bristle worms isn’t always necessary because they may be beneficial to the tank. If the worms aren’t identified as dangerous to other tank mates, it’s safe to leave the worms in the tank.