The lionhead goldfish is a peaceful freshwater fish from the Cyprinidae family, like the common goldfish.

The lionhead is a hooded variety of fancy goldfish, and is a precursor to the ranchu. These fish are not naturally found in the wild and are bred in aquariums for their specific appearance.

Unlike common goldfish, lionhead goldfish have egg-shaped bodies with a distinctive wen (Chinese term for tumor or growth) on their heads. Lionhead goldfish also lack a dorsal fin.

The lionhead goldfish is a popular fish for home aquarists due to its appearance and peaceful nature. The fish can be kept alone or with other peaceful species. Lionhead goldfish are aquarium-bred descendants of Asian carp species from the Cyprinidae family.

These fish are not found naturally in the wild and originate from a wild carp species found in Asia. Breeders have changed the appearance of lionhead goldfish over the years through different breeding patterns.

The lionhead goldfish species was taken to Japan and bred into a slightly different species known as ranchus. Ranchus have a more rounded back and a less pronounced head growth.

Beginner aquarists shouldn’t attempt to keep lionhead goldfish. These fish may seem easy to care for, but they develop infections easily and need to be well looked after.

The lionhead goldfish can live up to 15 years if cared for correctly. Knowing how long goldfish live can help you increase their lifespan.

The wen, which the lionhead goldfish is named for, is bumpy, and may not appear on every fish of this species.

They have rounded, egg-like body shapes. Lionhead goldfish have a similar appearance to oranda goldfish, but without the dorsal fin.

Females and males are similar in appearance, and genders are hard to identify until breeding season.

Lionhead goldfish can grow up to ten inches in optimal conditions, although they are usually five inches long. The lionhead goldfish has a smaller body than regular goldfish. 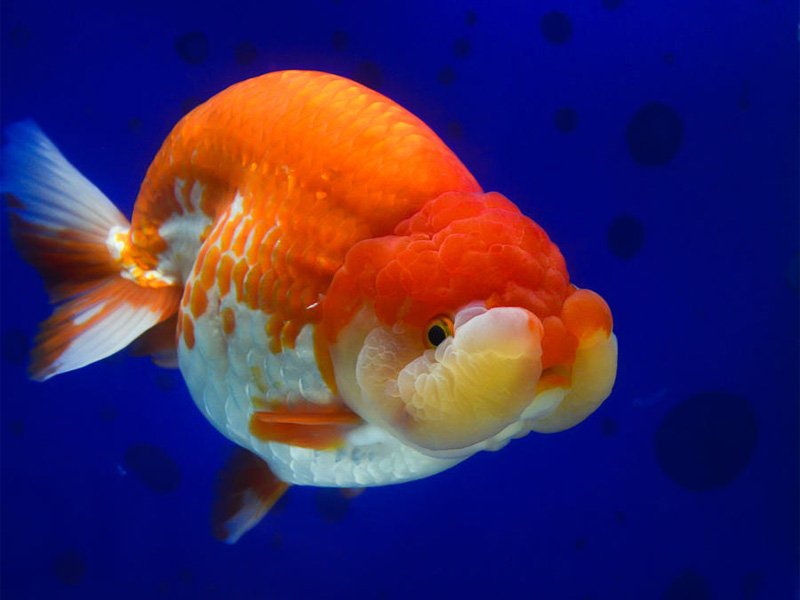 Lionhead goldfish are clumsy fish, with a head growth that may grow too big and cover their eyesight. The growth could also block the fish’s gills, which can cause breathing difficulties.

They are not aggressive, even during the breeding season. They will do well with slow-swimming fish and don’t mind being alone or having tank mates.

You shouldn’t keep lionhead goldfish with fast swimmers, as they will be bullied during feeding time due to their slow swimming speed. Lionhead goldfish will overeat if given the chance and need to be monitored during meal times. You should feed them twice a day.

Lionhead goldfish can injure themselves if they swim into sharp objects in the tank. The fish have a habit of digging up live plants if the plants haven’t rooted in the tank.

Lionhead goldfish need a moderate amount of care. These fish are not recommended for beginner aquarists, as they need a specific tank setup and regular checks to keep them healthy.

Tank setups need proper filtration, lighting, and a pH level between 6.5 and 7.5. Lionhead goldfish are omnivorous, but slightly more herbivorous, with a hearty appetite. The fish enjoy a varied diet of live, freeze-dried, and frozen food, as well as pellets and flakes.

Lionhead goldfish are prone to diseases such as swim bladder disease and infections. Diseases are more common in unhealthy tank setups.

They can handle slightly brackish waters but prefer large, pristine freshwater tanks. Because lionhead goldfish are messy fish that produce a lot of waste, you will need to clean the tank more regularly.

A single lionhead goldfish requires a minimum tank size of 20 gallons due to its heavy bioload. You must add an extra ten gallons to your tank for each extra fish added. For a community tank, you will need to consider a 50-gallon fish tank.

Lionhead goldfish tanks need a powerful filter to prevent diseases due to the large amounts of waste that this fish produces. A moderate water current can help prevent food and waste from stagnating. A strong water flow will make it difficult for these fish to swim, and isn’t recommended.

To improve filtration, add a bubbler to the tank. This will increase aeration and water movement in the tank.

The lionhead goldfish can survive in moderate tank temperatures of 62–75°F. You must keep the pH between 6.5–7.5 with a carbonate hardness of 4–20.

Sharp and abrasive substrates such as rocks and driftwood can harm lionhead goldfish. You must keep the tank sparse with smooth rocks and sand.

Lionheads are calm community fish that pairs well with non-aggressive fish. Fast-moving fish are not good tank mates for them, as they won’t be able to compete for food with these fish due to their slow movements.

Other fish that pair well with lionheads are minnows, rasboras, tetras, and danios. Add bottom-feeders such as corydoras and loaches with care, as they could increase the waste levels.

Non-fish tank mates, including crabs and shrimp, also work well. However, lionhead goldfish will eat anything small enough to fit in their mouths, including small shrimp species, so refrain from adding small species.

Snails are also good tank mates, as they will consume extra waste and substrates to help keep the tank clean.

Aggressive fish are not recommended. These fish may injure the wen of the lionhead goldfish and cause severe infection.

Lionhead goldfish have sensitive bodies and delicate head growths. They can easily develop infections, especially if you don’t keep their tank clean.

They can develop bacterial infections such as fin rot and dropsy. These infections are fatal if not treated early.

Fungal infections are also common in lionhead goldfish, including cotton wool fungus. These infections can alter your fish for life.

Swim bladder disease is a common illness that affects all types of goldfish. You will notice abnormal swimming patterns and balance problems. Defrosted peas may help these symptoms, but not always.

You can avoid swim bladder disease by feeding your lionhead sinking food and keeping the tank clean at all times.

Lionhead goldfish are healthy eaters and will consume both plant and animal matter. They prefer plant matter, but they need a varied diet.

You should provide a balanced diet for your lionhead goldfish. Some of the best goldfish food for these fish includes:

Lionhead goldfish eat a lot and will overeat if you feed them too often. You should feed them twice a day and watch them during feeding times.

These fish are slow to find their food, which could then be beaten by faster tankmates. If this happens, you may need to feed your lionhead on its own. You can breed lionhead goldfish in small groups of five fish or in larger groups. To promote spawning, you should separate males and females for a few weeks before breeding season. This will encourage the fish to breed once you place them in a breeding tank at the same time.

Make sure the breeding lionhead goldfish are healthy and free of disease before you place them in the breeding tank. The breeding tank should be cooler than normal conditions at about 60°F when you add the fish. Each day you should increase the temperature by 3°F until the fish begin spawning at around 68–74°F.

During breeding, the male chases the female around the tank for several days while their colors intensify. The male will push the female against plants in the tank and rub against her for a few hours.

The female will then lay up to 10,000 eggs before the male fertilizes them and both fish will begin eating the eggs if they are left in the tank. You should remove both fish immediately after the female lays the eggs.

Lionhead goldfish eggs will hatch on their own within a week. Feed the fry specialty fry goldfish food until they are big enough to consume brine shrimp and flake food.

Should You Get a Lionhead Goldfish for Your Aquarium?

Lionhead goldfish are fancy goldfish that will add an interesting aspect to your tank setup. However, they are not suitable for beginner aquarists because they require specialized care.

If you own a large community tank of slow-moving fish, a lionhead goldfish is a great addition and will add some character to your tank. Just make sure your tank setup is free from abrasive features that could harm your new goldfish.

December 22, 2021 Robert
About Robert 454 Articles
Robert Woods is the creator of FishKeeping World, a third-generation fish keeper, and a graduate in animal welfare and behavior. He is also a proud member of the Association of Zoos and Aquariums, the Marine Aquarium Societies of North America, and the Nature Conservancy.