Goldfish are the classic aquarium species. In media, they are usually depicted as simple plain orange fish. While many are, there are so many more that have distinctive colors and shapes.

Fantail goldfish are truly unique creatures. They make a great centerpiece for cold-water aquariums because they stand out in a mix of other fish.

Even beginners can give them a go, but be aware that they are prone to picking up some diseases. Their beauty makes them worth the risk, however, so they are greatly sought-after.

We are going to talk through how to properly care for fantail goldfish. By the end, you will know how to design the perfect tank, choose suitable tank mates, and avoid those pesky diseases. Fantail goldfish are a popular variety of fancy goldfish (Carassius auratus), from the Cyprinidae family. Other members of this family include the closely related carps.

Natural populations don’t exist in the wild. Fancy goldfish were selectively bred in captivity across Asia, in countries like China and Japan.

Fantails are the simplest form of fancy goldfish, lacking characteristic features that other varieties have, such as bubble eyes.

This makes them one of the hardiest. Many of the sought-after features on Fancies shorten their lifespan. If kept healthy, fantails can exceed ten years of age.

Their hardy nature makes them great for beginners trying fancy goldfish for the first time. They are ideal for cold-water setups and can even be kept in ponds.

You should be able to find a local stock of these fish with little difficulty. They are inexpensive too, with individuals costing under $5.

These are peaceful fish that do best when around other peaceful species.

Though the hardiest of the fancies, fantails are easily bullied because they swim slowly and can’t escape boisterous species. It makes it hard for them to compete for food too.

Do not keep them alone though. They are social creatures that enjoy having company. They don’t necessarily shoal, but will often interact with each other. You’ll need a bigger tank to hold a group.

Most of their time is spent in the middle levels of the tank, but they will adventure higher and lower in search of food. You might notice them dig around decorations as they search. As mentioned before, Fantails are the ‘basic’ version of fancy goldfish, but don’t be fooled into thinking that they are not beautiful fish.

They still have the fancy features that separate them from other goldfish, like comets. This includes the typical egg-shaped body and paired fins.

Be careful, as they can be very tempting for fin-nipping fish.

When viewed from above, the tail appears as a triangle, which is where the term ‘fantail’ comes from. If the tail is particularly long, they are referred to as “ribbontails” (but still classed as fantails).

Occasionally, this variety has telescope eyes. These will not develop until the fish is six months old, so it can be hard to tell if juveniles will have them or not.

The most common colors are oranges, reds, or yellows. Breeders have produced rarer colors though, like calico, white, black, and even fantails with the patchy design of koi.

An adult will be 6-8 inches from their head to the tip of their tail. 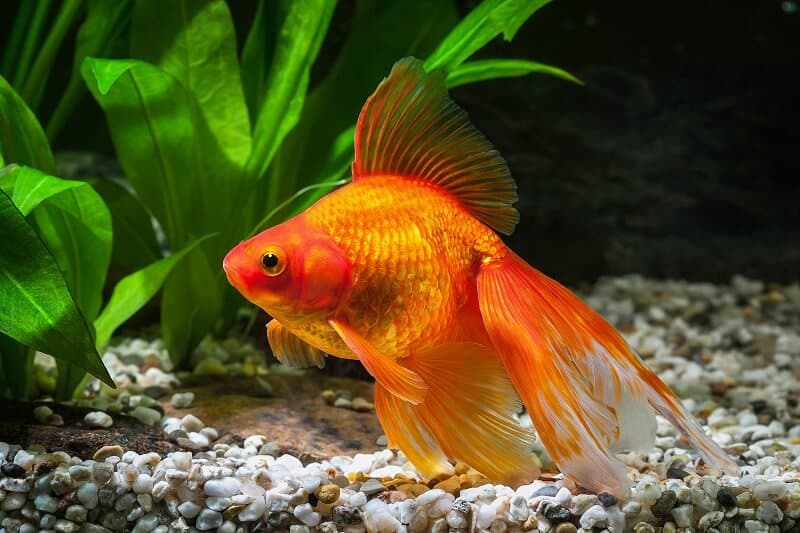 Fantails are not found in the wild, so we must turn to the closely-related carps when researching an ideal environment.

Carps live in slow-moving rivers and lakes with dirt lining the riverbed. The water temperature can vary dramatically between habitats, some being tropical and some being cold-water.

Plants would be abundant, with many of them floating on the surface.

Some people like to keep goldfish in ponds. Fantails are the most suitable fancy goldfish variety for keeping in ponds because they are so hardy. Larger varieties (like comet goldfish) are a safer option though.

Choose a soft substrate to cover the bottom of the tank. Fantails sometimes dig and large grains could scratch them. Injuries like this can easily lead to disease.

Choose some decorations that offer a few hiding spots, reserve most of the available area for swimming spaces and plants. They will provide plenty of shelter and help to keep the water clean.

Pick hardy species though, because your fish might nibble or dig around them. Hornwort is a good option and can be planted in the substrate or floated on the surface (but do not block all the light from above).

This cold-water species only needs a temperature of at least 60°F, the upper limit is 75°F. The pH should be between 6 and 8.

The only essential piece of equipment is a filter. Standard aquarium lights are fine. You could add an air/water pump to move and oxygenate the water, but don’t feel you have to.

Fantails need plenty of space. The minimum tank size is 20 gallons, but the more space you provide, the more likely they are to stay healthy.

Avoid using glass bowls instead of standard aquariums. These are usually too small, especially when your fish reach maturity.

Aim to have 8 gallons of water per fish because though they will group together sometimes, they also like swimming off on their own. There are two main things to consider when choosing tank mates: the water temperature and your fantail’s long fins.

The ideal temperature range for these fish is low compared to the preferences of other popular aquarium species. This reduces the number of options available to you.

You’re further restricted by their long fins. Fin-nippers (like tger barbs) will target the double fins. As slow swimmers, fantails can’t escape from fish that bother them.

Goldfish occupy all levels of your tank, so you don’t necessarily need bottom feeders to add interest to the lower regions. They will clean up leftover food when they head lower down too.

If you do want bottom feeders, you could get some corydoras catfish, kuhli loaches, or otocinclus.

You can add some small invertebrates without the risk of them being eaten. Examples include cherry shrimp, ghost shrimp, amano shrimp, nerite snails, or mystery snails.

Invertebrates are a great way to add some new behaviors.

Keeping them in groups of their own kind is the safest choice. They can be social together and you do not need to worry about compatibility problems.

Just be sure not to overstock the tank. Fantails are messy; they eat a lot which produces lots of waste.

Fancy goldfish can easily develop digestive problems because their organs are so compact in their bodies, so it is important to design a healthy diet. This is simply because they are omnivorous and will eat most aquarium foods.

To ease the workload for their digestive system, feed your fish in small amounts twice a day. Only give them an amount they can finish within 2 minutes.

Though they may still look hungry, don’t feed them extra food because they would happily eat all day. Remove any uneaten food to help keep the tank clean.

High-quality foods are the best choices for these fish. This means minimizing the use of dried foods (e.g. flakes and pellets), which have a low nutrient content.

Live and frozen foods (moist foods) are better choices as they retain their nutrients. You could use daphnia, brine shrimp, or bloodworms.

Try to supply some plant matter too, as this contains fiber which helps the digestive system. Green vegetables are good for this, and most people already have foods like lettuce and zucchini in their kitchen.

Occasionally your fantails will nibble at your live plants, but this will be infrequent if they are getting enough food elsewhere. These fish eat quite a lot and can create a big mess in your aquarium. Cleaning the tank regularly is therefore essential for maintaining a healthy environment.

Perform weekly water changes to stop the buildup of pollutants. Remove any uneaten food from the tank so that they cannot be broken down to release toxins.

Fantails will dig from time to time so ensure that the substrate is fine-grained to avoid scratching. Do not use decorations with sharp edges either.

Injuries can lead to disease. There are a few common ones to be aware of.

All fancies are at risk of swim bladder disease. This causes buoyancy issues, so the fish would either be floating at the surface or sitting on the substrate.

Overfeeding could be the problem. Starve them for 24 hours, then start introducing foods that are full of fiber, like vegetables.

Parasitic and bacterial skin diseases can be an issue too. There are lots of different ones, but they are easy to see because they tend to present as color changes and spots.

The solution is to buy medication. Some are available in stores, others are given out by veterinarians.

Once you have identified a sick fish, transfer it to a quarantine tank. Be particularly careful when handling these fish because they are easily damaged.

There should be few outbreaks in a clean tank, but these fish catch diseases more regularly than most. Their organs are squashed up inside their body, which can make them more susceptible.

They will happily mate in captivity if conditions are ideal, so be attentive with your cleaning. You will need a specialized breeding tank.

Raise the temperature of the water to simulate spring, which is a seasonal spawning trigger for many species.

The temperature change should be gradual, so the fish aren’t shocked. Increase it by 3°F a day, making sure not to raise it above 75°F.

When ready to mate, the male will start circling the female. If she is impressed with the courting, she will spawn with him.

This could result in up to 10,000 eggs that will be spread around surfaces in the tank. The parents may eat the eggs, so move them into a separate tank.

After a few days, the eggs will hatch, releasing many tiny fry. Feed them small foods that can fit in their mouths. Infusoria is high in protein, which is needed for growth, making it a good choice.

Using crushed dried foods alongside fresh foods is the best way to help them grow.

Are Fantail Goldfish Suitable for your Aquarium?

Most freshwater aquariums are tropical, but fantails need a cold-water setup.

This will likely be the most restricting factor when starting your aquarium because it limits the number of possible tank mates.

However, if you want a community tank, there are still lots of fish to choose from.

Beginners can look after fantails, providing that they’ve done their research. If the aquarium has been designed properly, your main job will just be keeping it clean.

They are very attractive and an excellent way to move on from more commonly kept species.

If you don’t think they’re for you, other varieties of fancy goldfish might be, like the popular black moor goldfish.