Ranchu goldfish are a freshwater breed of fancy goldfish, known for their distinctive bulbous bodies and heads. The ranchu goldfish is part of the minnow and carp family and is related to the lion head breed of goldfish.

Ranchu goldfish have round, heavy bodies and heads, making them slow and clumsy swimmers.

Originating in China, ranchu goldfish are a well-known breed of fancy goldfish and come in a wide variety of “traditional goldfish” colors, like orange, white, black, red, calico, or a mixture. Ranchu goldfish means “king of goldfish”. Ranchus are one of 125 species of fancy goldfish that have been bred in captivity. These fish originated in China and were designed to mirror a sumo wrestler’s appearance, with heavy, round bodies and heads.

Ranchu goldfish were bred in captivity, which means you can’t find them in the wild. Because they are not found in the wild, they tend to be less hardy than other species and require more in the way of care.

Ranchus are a popular fish and can be found in most fish stores.

A ranchu goldfish can cost anywhere between $5 and $25, but rarer specimens may cost more. These fish typically live for 10–15 years, so you can look forward to many years with your beloved pet.

Ranchu goldfish have traditional goldfish colors, mostly in shades of orange, gold, yellow, white, red, black, or a mixture of all colors. Calico, bi-color, and other patterns can also be found.

Ranchu goldfish don’t grow a dorsal fin. Instead, these fish develop a large head growth, called a wen. They typically grow to 5–8 inches in length and have long, stocky bodies. Ranchu goldfish may also become whiter with age.

Before adding any new fish to your aquarium, you should think about how a fish will impact your tank. If you’re starting with a new tank, here’s what you can expect from a ranchu goldfish.

Ranchu goldfish are peaceful and docile fish and are not aggressive towards other fish. They swim slowly and clumsily due to their bulky, broad bodies, and spend their days exploring and digging for food in the substrate.

Ranchus prefer to stay around the bottom or middle of the tank, although they do love to explore their surroundings as much as possible.

Ranchu goldfish are docile fish, and they don’t bully or bite other fish. In fact, ranchus are more likely to be on the receiving end of the bullying.

Ranchu goldfish are not particularly energetic fish, nor are they fast or agile. However, they often move around a lot in their tank, using their unique “wiggle” method of swimming.

You should switch off your aquarium lights during the night, so your ranchu fish can rest. Ranchus and most other fish don’t have eyelids, so they need darkness to rest and sleep.

You can feed your ranchus two or three times a day. Be sure to scoop out any uneaten food to keep the water quality clean. Ranchu goldfish may need extra time to feed, due to their slow swimming pace and poor eyesight.

A ranchu goldfish’s wen, or raspberry-like head growth, may grow to cover its eyes and nose. In some cases, it may be advisable to get the wen surgically reduced for the fish’s health.

Ranchu goldfish are not particularly hardy fish. Ranchus were bred in captivity, and can’t be found in the wild, so they require just the right tank conditions, plenty of room, and suitable tank mates to thrive.

Ranchus are also susceptible to inbreeding. Reputable breeders take care to make sure their fish are healthy and happy, but ranchus can still be prone to genetic deformities and diseases.

These fish are omnivores and need a varied diet to thrive. They love to explore, and like a fun environment with plenty of hiding places and decorations.

Due to their extensive care requirements, ranchu goldfish are best suited to more experienced aquarium keepers. Ranchu goldfish are freshwater fish and prefer as much space as possible. A tank with plenty of surface area will keep the water well-oxygenated. You should provide plenty of plants, substrate, and decorations to keep your ranchus busy.

Ranchu goldfish need well-oxygenated water, so live plants are a good tank addition. However, ranchus will eat plants and try to dig up roots, so be sure that your plants are properly anchored.

Ranchu goldfish love to explore. Plenty of decorations, caves, and more will appeal to your ranchu. Remember that ranchus have poor eyesight and may bump against decorations. Make sure your decorations aren’t sharp, and your fish can’t get injured or stuck.

Standard, medium-sized gravel works well as the substrate. Goldfish are messy, so you’ll also need a good water filter. You may also want to invest in a gravel vacuum to properly clean the substrate.

Ranchu goldfish will be peaceful towards most other fish, but they are limited when it comes to tank mates. Ranchus are prime candidates for bullying, due to their slow size and long fins. Faster fish may bite and nip at a ranchu’s fins and body and may eat all of the food before the ranchus are able to reach it.

This can have a serious impact on your goldfish’s health, which may lead to stress and illness.

Smaller fish also aren’t good tank mates for ranchu goldfish. Goldfish are famously greedy — if something fits in their mouths, they’ll try and eat it. Small fish or fry may get eaten by a ranchu goldfish.

Ranchu goldfish should only be kept with other similarly sized, slow-moving fish. Even with these limitations, you should still try to provide tank mates for your ranchu goldfish. While some fish (such as bettas) are perfectly happy in a tank alone, ranchu goldfish are social fish, and will be miserable if kept alone.

Other fancy goldfish that make good tank mates for ranchus include:

These types of fancy goldfish are all bulky and slow-moving, and won’t leave your ranchu goldfish behind during mealtimes.

Ranchu goldfish are prone to many common fish diseases. Here are some you should watch out for.

Also known as white spot disease, ich presents as white spots sprinkled across the fish’s body and fins. Your fish may seem to be itchy, rubbing itself against substrate or decorations.

The first thing you should do is quarantine the affected fish. If it’s too late, you may need to treat all of your fish in the tank for ich. Regular water changes and medication can cure ich. Consult a vet if you think your fish is suffering from ich.

Like other round-bodied goldfish breeds, ranchus are especially prone to swim bladder disease. The swim bladder keeps a fish stable and upright while swimming. If damaged or diseased, the swim bladder won’t work properly, and the fish will wobble or even swim upside down. Your goldfish might float, sink, or become stuck on its side.

Swim bladder disease is often caused by poor diet or bad water quality. You can deal with it by doing a water change, starving your fish for a day or two, then feeding it good quality foods. Live food, carefully prepared vegetables (like a single, peeled pea), or frozen live food are good for ranchu goldfish.

White, cottony patches on your fish, sores, ulcers, or ragged fins could all be symptoms of fungal or bacterial infections, including fin rot. You need to quarantine the infected fish. Consult a vet for suitable medicine, and add that to the infected tank, along with regular water changes. Ranchu goldfish are omnivores and thrive on a healthy, varied diet. You shouldn’t feed your ranchus too much floating food, as this can lead to them taking in too much air at the surface, causing swim bladder disease.

Live or frozen bloodworms, daphnia, and other live foods make a tasty treat for your ranchu. You should feed an adult ranchu goldfish two or three times a day, and young ranchus may be fed up to six times a day.

Due to their slow swimming and poor eyesight, ranchu goldfish may need a little longer to feed. However, you should still scoop out any uneaten food after a feeding session.

Goldfish in the wild spawn in the spring, when the water gets warmer. To replicate these conditions, you can lower the temperature in the tank, and gradually begin to increase it again. Some breeders separate the males and females for a few weeks prior to the planned breeding and then reintroduce them again at the same time.

You should choose two healthy, energetic ranchus for breeding, aged at least 1–2 years. You may notice breeding “stars” on the male goldfish, and the males will begin to chase around the females.

Breeding can be a stressful time for the females, and some breeders use clear partitions to keep the males and females separate but still in view of each other. If the female seems distressed, injured, or just uninterested, you should remove either her or the male and try again later.

Surface plants and breeding mats can provide good, solid surfaces for eggs to stick. Ranchu goldfish spawn easily but will begin eating the eggs as soon as possible. You should remove the male and female after a successful spawning.

Should You Get a Ranchu Goldfish For Your Aquarium?

If you have a tank big enough for at least two ranchus, or you already have a tank of round-bodied fancy goldfish, then you should consider getting a ranchu goldfish for your aquarium.

Ranchu goldfish can be challenging for inexperienced aquarium owners. However, once their tanks are properly set up, with suitable tank mates and proper food, ranchus are pleasant and peaceful fish.

Ranchu goldfish are sweet, endearing, and curious little creatures, with their own vibrant personalities. They have long lifespans and come in all shapes and colors. In short, ranchu goldfish are beautiful and lovable additions to any aquarium. 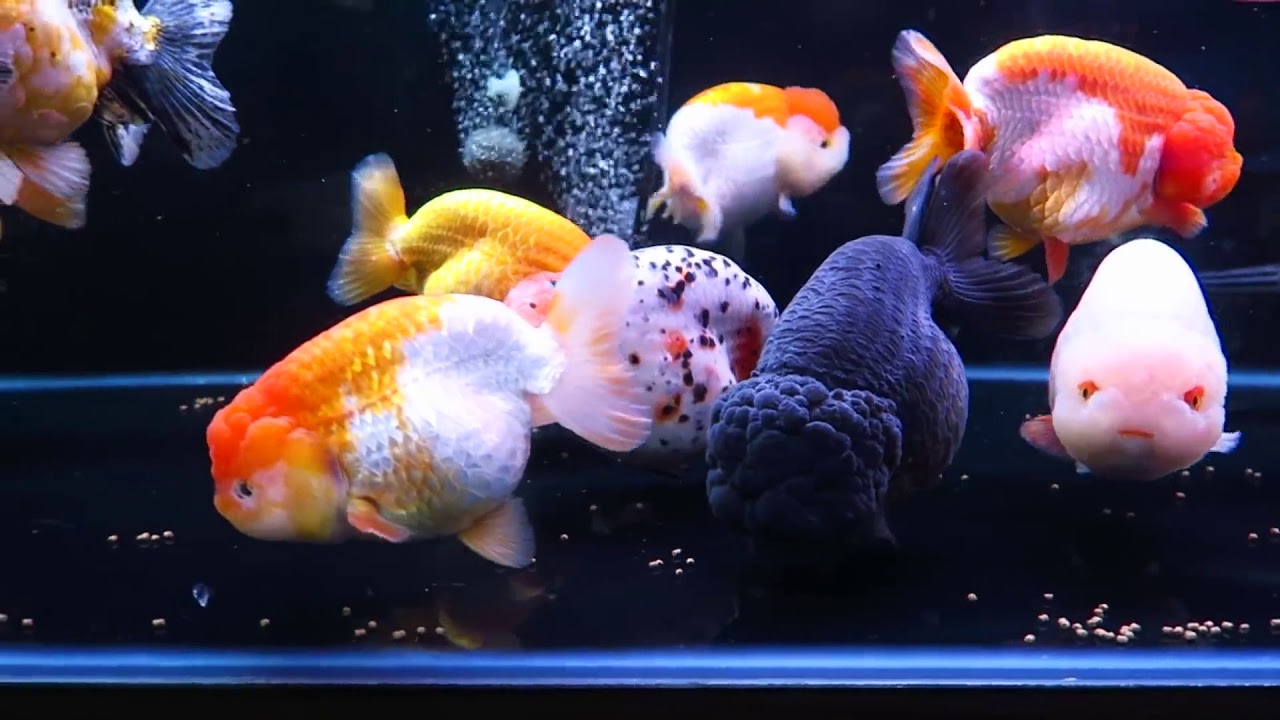 July 13, 2019 Robert
About Robert 454 Articles
Robert Woods is the creator of FishKeeping World, a third-generation fish keeper, and a graduate in animal welfare and behavior. He is also a proud member of the Association of Zoos and Aquariums, the Marine Aquarium Societies of North America, and the Nature Conservancy.