Bucktooth tetras are aggressive freshwater fish from the tetra fish family, making them a species-specific choice for a tank.

Originally from the Amazon and Guyana, the bucktooth tetra is an agile predator with beautiful colors and markings which makes it popular with aquarists. 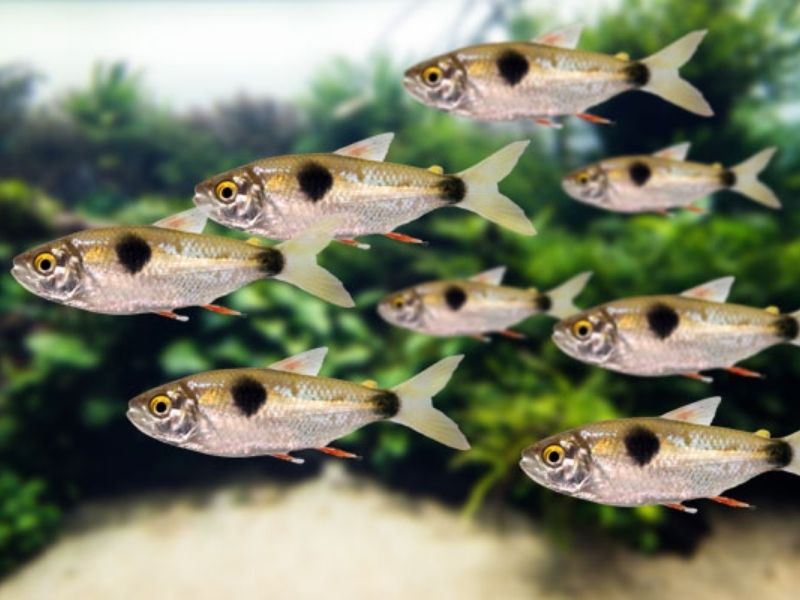 The bucktooth tetra (Exodon paradoxus) originated in Guyana and the Amazon Basin, and was introduced into the aquarium trade in 1932.

A large tank is required for bucktooth tetras, and it’s recommended to keep them in groups. The bucktooth tetra is still found in the wild, so captive fish need plenty of foliage in their tank to mimic the Amazon basins.

Bucktooth tetras grow up to 6 inches long in the wild, but typically reach a maximum length of 4 or 5 inches as tanked adults.

Bucktooth tetras are known to live up to 10 years in captivity as long as the fish are kept in clean tanks and fed plenty of high-quality food.

Bucktooth tetras are rare in pet stores and classified as “premium pet fish.”

Some pet stores import bucktooth tetras, and the price ranges from $6.49 to $15.60 each, depending on the size of the fish. Some stores sourcing bucktooth tetras include: 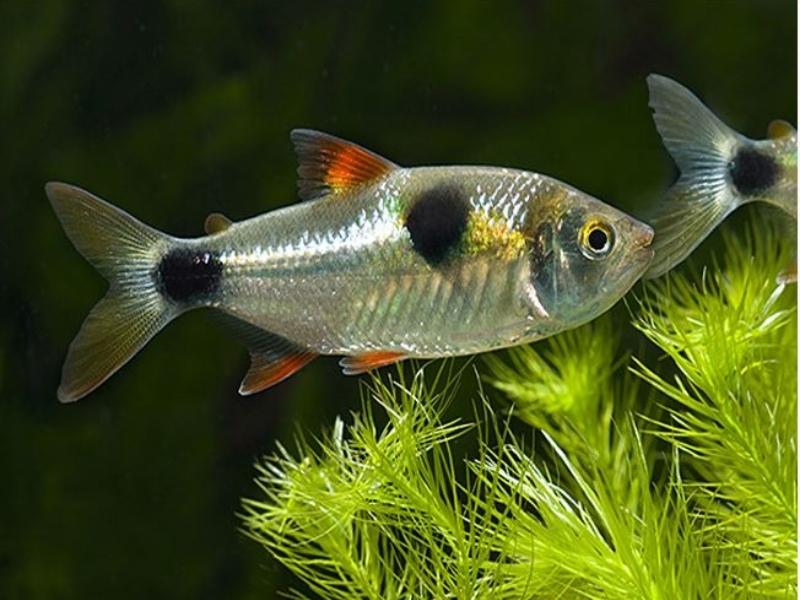 The bucktooth tetra has an elongated, torpedo-shaped body similar to some other tetras species for improved agility and speed in the water. Bucktooth tetras have a shiny silver body lined with scales with red and yellow flecks, and two main accents along the midsection of their bodies.

The flippers of the bucktooth tetra are translucent with yellow tinges, and its dorsal fin and tail have red or orange speckles. These fish also have two distinct black spots, one near the tail and the other close to the dorsal fin.

Bucktooth tetras have fine and pointy teeth to help them eat the scales of other fish, but their teeth aren’t noticeable unless you look closely.

Male and female bucktooth tetras look similar in color, size, fins shape, and tail length. Both males and females can grow up to five inches long in a captive tank.

Bucktooth tetras are typically energetic, darting around the tank, but notable anti-social and skittish behavior changes are signs of distress.

Bucktooth tetras are aggressive, territorial shoaling fish that swim in large groups, and will attack other fish to defend their realm, so they should only live in a species tank.

Under the right conditions and in a well-maintained tank, bucktooth tetras shoal around the bottom and middle of a tank amongst caves and plants.

Bucktooth tetras dart around the tank during the day and rest at night. These fish will occasionally split up for a moment and will attack ill or distressed schoolmates that swim alone.

Male and female bucktooth tetras are aggressive towards each other. Because of this, you should keep an equal number of males and females in the tank.

Bucktooth tetras are greedy eaters, and feed multiple times daily. You should feed them adequately during the day to maintain a healthy day to night cycle.

Bucktooth tetras are difficult to care for as they are hunters and require plenty of space to dart around in their tanks decorated with caves, driftwood, and plants, in addition to having soft, warmer water resembling the native Amazonian habitats.

As carnivores, bucktooth tetras eat other fish scales, shrimp, and insects and require a lot of protein in their diet. Because of this, you should keep a set feeding schedule and offer the fish high-quality food regularly.

Feeding bucktooth tetras plenty of protein and maintaining the right tank conditions will keep these predators happy and healthy.

Fin rot is either viral or bacterial, and looks like an uneven rot along the fins. Fin rot most typically moves inward from the edges, causing irreversible tissue damage on the bucktooth tetra’s body if left untreated.

Poor tank conditions are the most common culprit of fin rot and cleaning the tank properly prevents the infection from worsening.

Treating fin rot immediately is the only option as it’s contagious and could kill bucktooth tetras.

Ich appears as white spots all over the fish’s body. Treat ich by moving infected fish into quarantine, and turning the water temperature up to 84°F for five days.

Add ich medicine to the tank, and use a gravel or sand siphon to vacuum the worms or tomites from the sides of the tank. Don’t remove more than 15% of the water at a time. 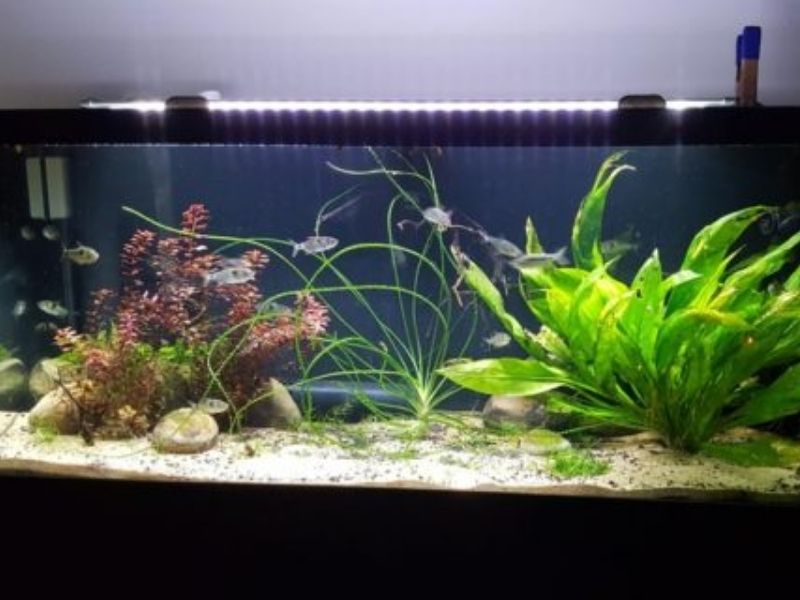 Bucktooth tetras originate in the Amazon, where the freshwater is warm, soft, and filled with caves, rocks, and plants.

The right tank conditions are important for keeping a thriving school of bucktooth tetras.

Bucktooth tetras are freshwater fish, so you can fill the tank with tap water. Don’t use distilled water because the mineral levels in the water aren’t recommended for bucktooth tetras.

A temperature between 72°F and 82°F is good for bucktooth tetras, with 75°F being ideal. Check the temperature daily to prevent fluctuation of more than two degrees either way.

Bucktooth tetras love caves, stones, and foliage. Add caves, driftwood, Amazon swords, Java fern, and floating plants around the edges of the tank to give the fish enough freedom to shoal. Bucktooth tetras have a predatory nature, meaning they’re incompatible with other tank mates.

It’s recommended to have single-species tanks with bucktooth tetras because they’ll attack other fish and part of the bucktooth tetra’s diet is fish scales.

Some aquarists experiment with aggressive bottom-feeding fish who stay out of the bucktooth tetra’s way, but there’s no guarantee the bottom-feeders will remain safe. Some risky options include:

Feed bucktooth tetras live or dead protein multiple times daily. Some bucktooth tetras eat flakes and pellets, but it’s better to feed them protein as much as possible. Even feeding them insects caught around the house is a good idea.

Bucktooth tetras eat three small meals daily, and mixing the food up is a good way to ensure the fish remain healthy. Feed bucktooth tetras as much as they’ll eat in three minutes and stop.

Overfeeding the fish can cause sluggishness, making them targets for cannibalism. The greatest challenge to breeding bucktooth tetras is distinguishing males from females.

There are no notable differences between sexes, but having a large school improves your chances of having both genders.

Male and female bucktooth tetras also behave more aggressively towards each other.

Should the group be 12 to 25 bucktooth tetras, breeding is probable. Bucktooth tetras also remain greedy eaters and hunters, even eating their own eggs and fry.

Separating the eggs from the fish immediately is the only way to prevent cannibalism.

Should You Get a Bucktooth Tetra for Your Aquarium?

Bucktooth tetras are beautiful fish for aquarists who love aggressive, shiny fish. Only get a bucktooth tetra if you have a large enough tank and plan to home a school of 12 or more.

Some aquarists prefer a challenge, and the highlights of the bucktooth tetra certainly outweigh the hunting behaviors and tank mate challenges.

March 9, 2019 Robert
About Robert 468 Articles
Robert Woods is the creator of FishKeeping World, a third-generation fish keeper, and a graduate in animal welfare and behavior. He is also a proud member of the Association of Zoos and Aquariums, the Marine Aquarium Societies of North America, and the Nature Conservancy.