The redeye tetra is a freshwater fish from the Characidae family. Native to the rivers of Brazil, Paraguay, Bolivia, and other places in South America, the redeye tetra is only one of many species from this family.

Redeye tetras are medium-sized fish with a striking appearance. As their name suggests, their eyes have a bright red hue, and they have shimmery skin. This gives the redeye tetra an unusual look, making it highly appealing to home aquarists who want something a little different in their tanks.

Redeye tetras are simple to care for, making them one of the best fish for beginners who are just starting out on their fishkeeping hobby. The redeye tetra’s scientific name is Moenkhausia Sanctaefilomenae. This fish is one of approximately 150 species in the Characidae family of freshwater fish. It is also sometimes known as the yellowhead tetra, because of the yellowish tinge along the top part of its head.

The redeye tetra is native to South America, where it is found in the rivers of Brazil, Paraguay, Peru, and Bolivia. While these fish are more commonly found in rivers of clear water, they have also been known to inhabit the Amazon, where the water is cloudy and murky because of its heavy vegetation.

Redeye tetras have become so popular that they’re now bred commercially in many countries in Europe and Asia, specifically for home aquarists who want to include this unusual fish in their tanks.

Redeye tetras are easy to breed, and as a result, are now readily available in most pet stores that sell fish. They are quite affordable and can be bought for as little as $2 each.

This species has a long lifespan, compared to many other freshwater fish. With the right care, redeye tetras can live for up to five years, which is another reason why they are so popular. The redeye tetra is an attractive fish with a very shiny silver body. The shimmery look makes it stand out from other fish in its tank. Their tails are usually black but have a noticeable, thin white border around the tail’s edge.

Redeye tetras are well-known for the distinctive red outline around their eyes. This is the feature that gives them the name, redeye tetra. While the outer rim of the eye is bright red, it has a black dot on the inside.

Redeye tetras are medium-sized fish. The average length of a full-grown adult male is approximately 2.8 inches. The female is often slightly larger and rounder than her male counterpart.

When the female redeye tetra is ready to breed, she tends to fill out even more, and her shape becomes even more round and plump along the bottom of her belly. The male will indicate that he is ready to breed by becoming even more shimmery and bright-colored.

Redeye tetras are peaceful fish. However, they are also highly energetic, and enjoy swimming rapidly and darting in and out of hiding places. They will usually swim around for most of the day, preferring to keep to the middle section of the tank.

At night, switch off their tank lights, giving redeye tetras sufficient darkness to slow down their movement and allow them to sleep.

The redeye tetra is highly suitable for a community tank with a few other peaceful freshwater fish. The ideal is five or six tank mates. If redeye tetras are alone in a tank with only one other fish, they are likely to try to safeguard their territory by becoming aggressive towards the other fish.

In a community tank setting, redeye tetras seldom display any kind of aggression towards other fish. They will only try to bite other fish if they have long fins and move very slowly, brushing against the redeye tetra with their fins. Redeye tetras are fish that are easy to look after and do not require any kind of special care or attention. As long as you meet their basic needs in terms of tank conditions and diet, redeye tetras should be quite happy in your home aquarium.

Redeye tetras originate from the rivers of South America, where the water conditions range from clear to swamp-like and marshy. As a result, they are used to a variety of water conditions.

The redeye tetra is an omnivorous fish and will thrive on a mixed diet that is both meat- and plant-based.

The redeye tetra is hardy and does not easily succumb to most diseases that commonly affect other tropical fish. Redeye tetras are able to keep relatively healthy, only occasionally suffering from ICH.

Your redeye tetra’s tank should replicate the conditions in which this fish is naturally found in the wild. The rivers of South America are filled with thick vegetation. The redeye tetra needs plants and driftwood in its tank in order to mimic its natural environment.

Redeye tetras enjoy darting into small crevices and hiding in little nooks and crannies. They will be very happy with a few rocks among the plants in their tank, giving them plenty of hiding places.

One of the most essential aspects of maintaining good health in your redeye tetra is keeping the tank clean. It should be cleaned and the water should be changed on a regular basis. A quarter of the water should be removed and replaced at least twice a month. This will prevent algae and bacteria from building up in the water.

The redeye tetra is able to cope with a broad spectrum of water conditions. The following ranges should be your guide:

If your aquarium is in a room that gets very cold, you may need to use a water heater to maintain the correct temperature. These usually come with a built-in thermostat, to ensure that the water is neither too cold nor too warm. You should also learn how to dechlorinate tap water for fish.

The redeye tetra is a peaceful fish and is usually happiest in a community tank of six or more fish. It will get along with most other freshwater fish of similar size and temperament. We suggest these fish as tankmates:

Avoid pairing redeye tetras with aggressive species of fish. This could lead to your fish attacking and biting each other. It would not be a good idea to place any of these in your aquarium with your redeye tetra:

If you notice that the fish in your aquarium are not getting along well, and are trying to hurt each other, here are some things you can try:

If none of these steps improve the situation, you may have to resort to separating your fish and removing the more aggressive fish from the tank altogether.

Do not add live non-fish tank mates, such as shrimp, snails, or crabs in the tank. The redeye tetra is a meat-eater, and it may see these companions as food and try to eat them.

In your aquarium, the redeye tetra will enjoy eating a combination of plant-based foods and meat. The ideal is to feed live meat such as shrimps and bloodworms. If this is not possible, you can get these in frozen form.

Redeye tetras should be fed very small amounts, two to three times per day. Only give as much food as they can eat within three minutes.

Make sure not to overfeed your redeye tetras. Overfeeding will cause your fish to become bloated and sluggish, and may eventually make them seriously ill.

The redeye tetra is a strong, resilient fish that seldom suffers from diseases. The one disease that does sometimes affect this fish is ICH.

ICH is a disease that is very common in community tanks. It shows up as small white spots, usually starting on the mouth, fins, and tail, and then spreading to the body of the fish. If caught early, it is possible to eradicate it and the fish can survive. However, if left untreated, it will spread rapidly and can eventually kill the fish.

As soon as you notice the beginnings of ICH on a fish, separate the affected fish and place it in its own tank. Then, treat the water in the communal tank to remove any trace of the infection.

You can buy special drops to treat ICH from a pet store, to add to the water in both tanks. This will hopefully prevent the ICH from spreading to the healthy fish while curing the affected fish. In order to prepare redeye tetras for breeding, separate the males and females and place them in different tanks about 10 – 14 days in advance. Feed them only on live meaty foods during this time.

Transfer at least three males and three females to the breeding tank. Provide some floating plants in the tank. The fish will lay their eggs in the plants.

It is advisable to remove the breeding pair from the tank after spawning has taken place, otherwise, the parents are very likely to eat the eggs. The eggs will hatch one or two days after being laid.

The young fry should be fed minute quantities of special food for the new fry for the first week or two. You can then start to introduce fresh meaty foods very gradually.

Should You Get A Redeye Tetra For Your Aquarium?

If you don’t have any aggressive fish in your aquarium, and you like the look of redeye tetras, you should definitely add them to your community tank.

If you have other fish, like bettas, that have aggressive tendencies, it’s not a good idea to introduce a redeye tetra to your tank.

The redeye tetra is a beautiful-looking fish that will attract attention in your tank. It has a long lifespan and should give you years of pleasure and satisfaction. 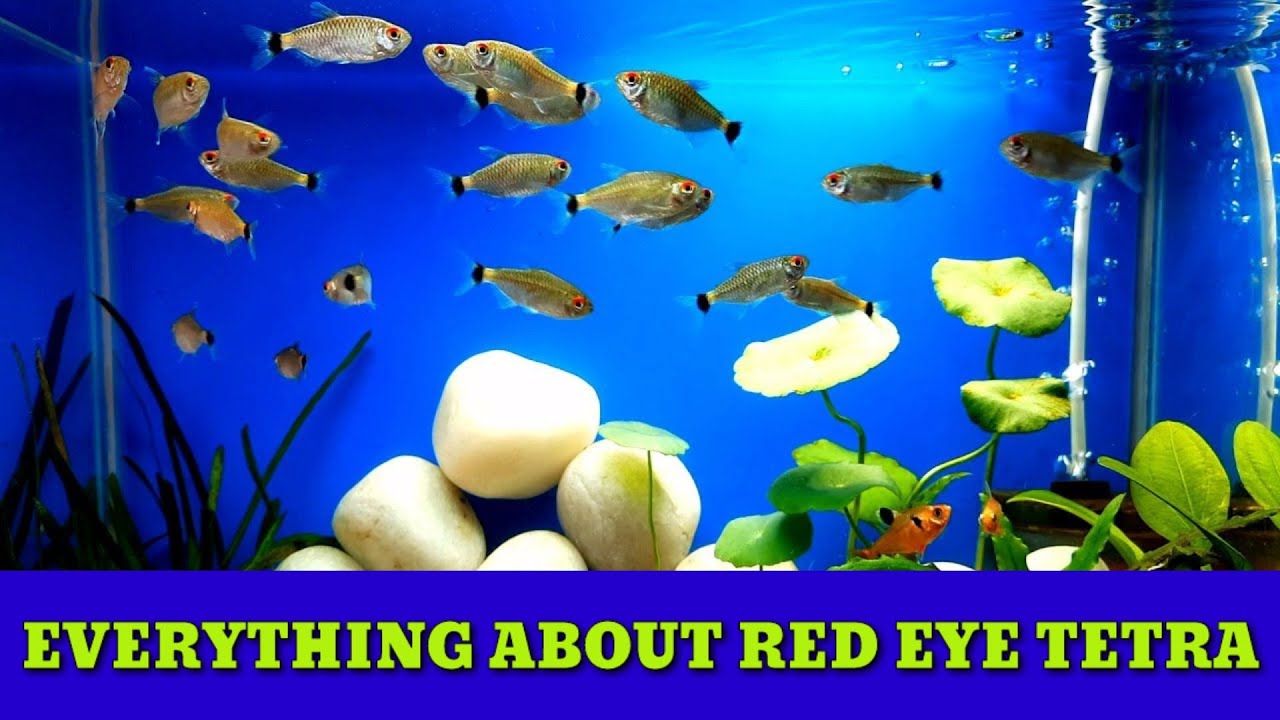 December 17, 2020 Robert
About Robert 420 Articles
Robert Woods is the creator of FishKeeping World, a third-generation fish keeper, and a graduate in animal welfare and behavior. He is also a proud member of the Association of Zoos and Aquariums, the Marine Aquarium Societies of North America, and the Nature Conservancy.