Tropical aquariums are extremely popular, likely due to all the colorful fish that could be chosen as tank mates. White Skirt Tetra stands out for the opposite reason.

Their solid white bodies are particularly striking, especially in large groups. They prove that color isn’t the only thing that determines a beautiful fish.

They are extremely easy to look after. They are an undemanding species, so beginners could add them to their setups without having to worry.

In this article, we will cover all the important information you’ll need when caring for White Skirt Tetra. This includes their ideal aquarium and diet, how to breed them, and much more… White Skirt Tetra is a species in the Characidae family called Gymnocorymbus ternetzi.

They are actually a genetic variant of Black Skirt Tetra, which you may be more familiar with. They are both the same species though and share the same preferences for their environment.

This species is native to Brazil, Paraguay, and Argentina, where they live in tropical freshwater rivers. They will need conditions similar to that of the Amazon River, just like many other popular aquarium species.

Their white color has made them easy for some breeders to dye, but this process is harmful to the fish, so never buy these dyed varieties.

This is an easy species to care for, so beginners won’t have any problems. In a healthy tank, they can live for 3-5 years.

White Skirt Tetra isn’t as common as Black Skirt Tetra, so it may take longer to find a stock near you. They should cost roughly the same price though, just $2-$3.

This is a peaceful species that makes an excellent addition to a community aquarium containing other peaceful fish of a similar size.

They may become skittish around boisterous fish, but they will feel more confident in larger groups.

They are shoaling fish, so keeping them in groups is essential. They will stick with their own kind, often moving in unison. A shoal moving together is impressive, and it makes their color (or lack of) stand out more.

They generally swim in the middle and upper levels of the tank, but they might stray when looking for food or trying to find shelter 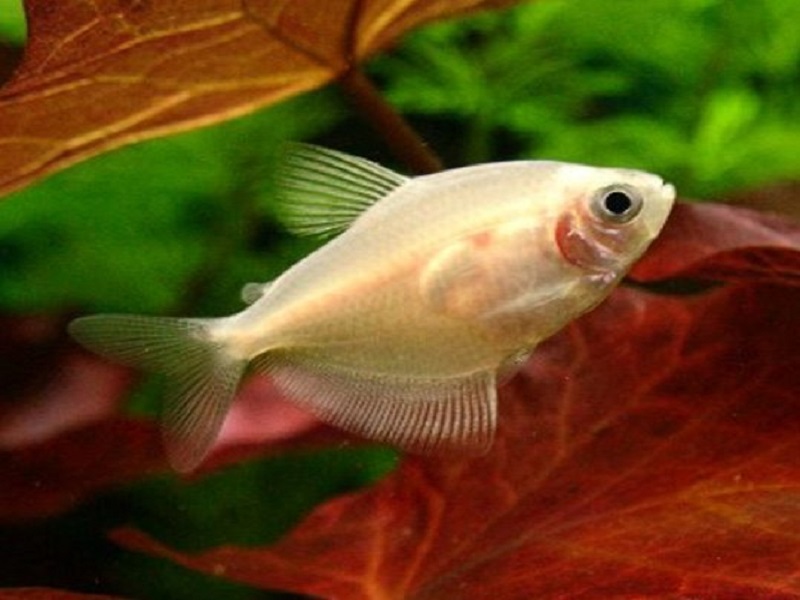 If you are familiar with Black Skirt Tetra, then you should be able to imagine White Skirt Tetra, as they are just the white equivalent.

Their body is a solid white with transparent fins, giving them a ghostly appearance. Their only bits of color are their dark, black eyes.

Dyes have been used to produce ‘blueberry tetra’, ‘strawberry tetra’, and ‘rainbow tetra’, among others. Do not by these, the dying process causes health issues for the fish.

A fully grown adult will be just over 2 inches long.

Sexing them can be difficult. Females are slightly larger; they will also become plumper around mating time. Gymnocorymbus ternetzi is native to South America where it occupies the shallows of tropical rivers throughout Brazil, Paraguay, and Argentina, though it has now spread further afield.

The water would be warm and mildly acidic. These fish live in areas where there is a slight current, but not too strong. There would also be plenty of sunlight hitting the water.

Under the surface would be a sandy substrate, anchoring lots of plant life. These are used for shelter. There would also be rocks and debris that have similar use.

Replicate these conditions for your White Skirt Tetra to keep them healthy.

Pick a fine-grained substrate (like sand) if you want to best recreate the natural habitat. This decision isn’t too crucial for these fish, as they tend to stay higher up in the water.

Providing lots of live plants is important though. White Skirt Tetra needs these as a refuge from other fish and bright lights. With live plants in the tank, they will feel more confident to venture out, since they have somewhere that they can retreat to.

Using a heater, keep the temperature of the water between 75°F and 80°F. The pH needs controlling too, keep it between 6.0-7.5.

Standard aquarium lighting is fine. Your filter outlet should create a sufficient current, but you could try adding an air pump to move and oxygenate the water.

Small groups of 5-6 can be kept in a 10-gallon aquarium, but they will be happier in a larger tank that has more open swimming spaces.

To accommodate a larger group of fish, you’ll need a bigger tank. Try to allow at least 3 gallons of water for each additional fish.

White Skirt Tetra has the potential to go in either a community aquarium or a species tank.

Any tank mates should be peaceful and of a similar size. White Skirt Tetra can be easily bullied by large or overly active fish.

There are so many other potential tank mates, just be sure to research compatibility before purchasing any.

Invertebrates can be great tank mates too. There are lots of shrimp and snail species available to be kept in home aquariums nowadays.

Can You Keep White Skirt Tetra Together? These fish should always be kept in groups. They are social animals that display shoaling behaviors when kept with others of their own kind.

Without these social interactions, they can become stressed and more likely to become ill. Keep White Skirt Tetra in groups of at least 5-6.

The larger the group, the happier they will be, and the more impressive their displays will be. Be sure not to overstock your tank though.

In the wild, Gymnocorymbus ternetzi would eat small worms, crustaceans, and insects. In the aquarium, they are much more adaptable.

They will accept the most common aquarium foods, such as flakes and pellets.

Supplement dried foods with live/frozen foods, as these are much more nutritious. There are lots you could pick from, like bloodworms or daphnia, they just have to be small.

A varied diet is the best way to provide all the nutrients your fish need to grow and stay healthy.

Feed them a couple of times a day, just giving them an amount that they can easily finish within a couple of minutes. This method eases the load on their digestive system.

These are easy fish to care for. They are undemanding and can be kept in many different setups.

They work well for beginners of the hobby, though they can be enjoyed by the most experienced aquarists too.

You need to keep their environment clean. Perform regular partial water changed to prevent the buildup of pollutants. Wipe away excess algae before it can get out of control too.

White Skirt Tetra Are not particularly prone to disease, but they can still get ill, just like any species.

Ich is a common problem in the aquarium industry. It is a parasite that causes white spots to appear across the body of the affected fish.

If you see this quarantine the fish. There are treatments available for purchase to help with recovery.

During spawning, a male will pick a territory to defend. They may become a bit more defensive, but this will only result in a display to other males and shouldn’t cause injuries.

Fine-leaved plants are the ideal setting for spawning, so they are crucial for your tank if you want to breed this species.

After mating, the female will scatter eggs around the tank. Separate the parents from the eggs after this, otherwise, they’ll start eating the eggs.

It will only take a day for the eggs to hatch. The fry will be tiny, so feed them newly hatched brine shrimp or egg yolk until they are larger enough to eat an adult’s diet.

A clean tank is important for White Skirt Tetra to start spawning. Make sure their environmental preferences are being met.

Are White Skirt Tetra Suitable for Your Aquarium?

These are very easy fish to care for, so there’s no reason why you couldn’t care for them successfully.

After designing a suitable tank, there’s not much else you need to do to keep them healthy. Just provide a healthy diet and complete regular tank maintenance, which you should be doing anyway.

As a shoaling species, their white bodies become particularly striking in large groups. These are beautiful species that make fabulous tank mates for a community aquarium.

Do you prefer White Skirt Tetra over Black Skirt Tetra? Let us know why in the comments below…