The Congo tetra is a colorful, freshwater fish originating from the family of African tetras (Alestidae), found in the Congo River Basin in Central Africa.

The Congo tetra is a popular fish among aquarists due to its bright colors and adaptability to aquarium conditions. The Congo tetra is one of the best types of tetra fish for aquarists, as Congo tetras have long been successfully bred in captivity and are easy to take care of.

If you decide to make the Congo tetra a part of your fish tank, you’ll be pleased with the dynamic movement and vibrant sparkle it brings to the aquarium.

However, you should keep in mind that Congo tetras might also not be the easiest fish to handle due to their relatively large size that requires a larger space, and their sensitivity to bad water conditions. The Congo tetra (Phenacogrammus interruptus) is part of the Alestidae family, or the African tetras. These fish originate from the region of Central Africa and are typically found in the basin of the Congo River.

The Congo tetra is one of the most popular freshwater fish commonly kept in habitats with a pH between 6.0 and 8.0. The standard habitat of this species is murky river waters such as river streams and pools, usually surrounded by greenery and a variety of water plants.

When making a tank suitable for the Congo tetra, make sure the water in the aquarium is slightly acidic or neutral, as well as warm enough with a temperature between 73°F and 82°F. These fish can live between 3 and 5 years in the right tank conditions.

Male Congo tetras can reach up to 3.5 inches in length, while females are usually smaller, at 2.5 inches on average. Congo tetras require a large tank that is bigger than the one needed for other tetra species.

Congo tetras have been bred in captivity in the United States since the 1970s, making them widely available in most American pet stores. Today, these fish will cost between $7 and $10. However, because the Congo tetra is a schooling fish, you should buy these fish in a group of around six.

The Congo tetra is a colorful fish known for its iridescent shimmer. As the fish swims across the tank, you’ll see its diverse palette of vibrant tropical colors, from purple and blue to bright orange. There is also a noticeable stripe that runs across the Congo tetra’s body from head to tail that typically reflects most of the orange and red shade on its body.

In reality, however, the base color of a Congo tetra is olive. In adolescence, the Congo tetra’s colors are not as vibrant because the fish reaches its full coloration in adulthood.

If your Congo tetra seems to be losing color, this can be a serious sign of the deteriorating quality of water this species is highly sensitive to.

The Congo tetra species, as the name suggests, has a characteristic tetra shape, reminiscent of a triangular pyramid, covered in large scales. These fish are easily recognized by their beautiful fins, especially the almost transparent, violet-and-gray tails. Compared to females, the males often have a more outstanding dorsal fin, which they tend to use to their advantage in mating rituals.

Adult males may reach up to 3.5 inches (8.5 cm) in the longest part of their body, while females are smaller, up to 2.75 inches (6 cm) in length. This size makes the Congo tetras larger than other tetra fish (such as the green neon tetra fish that is usually less than an inch in length).

Congo tetras are peaceful and calm fish that feel most comfortable in groups of their relatives. Having several Congo tetras in your tank will not only give your fish peace and protection but will also make your tank that much brighter with their shimmering rainbow colors. During the day, when these fish are most active, Congo tetras will group together and swim around the tank together, occasionally separating to explore.

Typically, Congo tetras will get along with a variety of other peaceful fish, but will not be comfortable living with any aggressive fighting species. Congo tetras are easily scared and do not respond well to bright light or loud noises. They need caves and plants in the tank to hide in if they sense danger.

Congo tetras usually occupy the middle and top tank levels, swimming quickly and graciously. However, they should not be placed in the same tank as extremely fast fish, as this might stress them out.

One of the unusual behaviors Congo tetras can show is nibbling on the leaves of the plants in your tank. This is a sign they are not getting enough food, so increasing their food intake slightly should fix the problem.

Congo tetras are relatively easy to care for, as they require minimal care once their living conditions are settled. These fish require a lot of space in the tank, as well as elaborate plant decorations reminiscent of their natural habitat in the murky river waters of the Congo.

Congo tetras are also easy to feed, as they can eat a variety of fresh and dried foods.

While being quite easy to take care of, remember that Congo tetras can be prone to some common fish diseases, like ICH, when water temperature levels get too cold for them.

The Congo tetra is a generally healthy fish, though it might be prone to some common diseases. Congo tetras may develop ICH if the water temperature in the tank is too low. New plants and fish that you introduce in the tank may be sources of infections for Congo tetras. To keep this species safe, make sure to quarantine any new members of the tank for a few days.

Congo tetras can develop diseases and lose coloration from stress, especially when kept in a tank with aggressive species. These tetras can also suffer from parasite infestations, skin diseases, and general bacterial infections.

The best way to protect Congo tetras from diseases is by keeping the tank clean and filtered, as well as making sure the conditions are consistent. When designing a tank for Congo tetras, make enough space for the fish to hide. For example, include small caves and floating plants, create lighting similar to that in a river, and add other plants typical for freshwater environments.

Do not try to add too many rocks and stones, as Congo tetras are not used to these decorations, and will prefer dark-colored sand or gravel at the bottom of the tank.

You can use either plastic plants or fresh ones since both options will look good in the tank. However, keep in mind that fresh plants will keep the water fresh by adding oxygen to the environment of the aquarium.

Congo tetras require a lot of space for free movement, so you should consider at least a 20-gallon tank but ideally aim for 30 gallons. In a large and spacious tank, Congo tetras will showcase their beautiful rainbow colors in all their glory.

Congo tetras are a tropical species and need warm water from 73°F to 82°F. You should keep a water heater near the tank in case you live in a climate where temperatures can drop to keep the water in the tank consistently warm and prevent diseases.

The water should be slightly acidic, with a pH of 6.0 to 8.0, and hardness between 3 to 18 dGH. The substrate that Congo tetras are used to in their natural habitat consists of sand and mud, which can be easily replicated in a tank.

You should regularly filter the water in the tank because Congo tetras are sensitive to any unfamiliar bacteria and low water quality.

Congo tetras are peaceful and generally harmless fish, so they will make a great tank mate for any other fish of similar temperament and size. Fish that are larger than Congo tetras may be more dominant in the tank and scare the gentle tetras, causing stress.

Congo tetras will get along particularly well with other tetras, like the cardinal tetra, diamond tetra, and neon tetra. Other perfect tankmates for the Congo tetra are guppies, mollies, and corydoras.

Congo tetras will struggle if placed in a tank with an aggressive and dominating species. Aggressive fish can destroy the Congo tetras’ beautiful fins when trying to establish dominance. Some of the worst tank mates for Congo tetras are betta fish, which are aggressive and typically show signs of defense when they think their territory is violated.

In the wild, the Congo tetra is an omnivore. It feeds on worms and insects, algae, and water plants. This means the Congo tetra is relatively easy to feed in captivity. To feed your Congo tetra, you can choose from a variety of foods, including live food like bloodworms and brine shrimp, as well as dried treats like general flakes and omnivore pellets.

You can vary a Congo tetra’s diet by adding different kinds of foods to its meal plan. For example, the fish will benefit from having live food twice a week, but the majority of feeding can be done with flakes. Congo tetras can be fed three times a day in small quantities. Their feeding time usually does not take longer than two minutes. Breeding Congo tetras at home is a challenging process. Congo tetras require specific conditions to breed, such as a brightly lit spacious tank of at least 20 gallons, as well as plants where the tetras can lay their eggs. Some suitable plants are moss and artificial grass.

To ensure successful breeding, choose the brightest-colored males to make sure they attract the females’ attention. Before the breeding period, you need to separate males and females. Place them in clean water, and feed them a healthy diet consisting predominantly of live foods for about two weeks.

When you are ready, place your selected pairs in a separate tank and wait. The spawn may take place immediately or in a few days. Soon, you will notice that the female’s belly has become round, which means she is ready to lay eggs. One Congo tetra lays around 300 eggs, most of which have a good chance of hatching.

After the female lays the eggs in the tank, remove the adult fish from the tank so that they do not eat their own offspring before they hatch. The hatching will take about 6–7 days. The offspring will start swimming right away, and you can start feeding them with small live foods. Soon, you can start giving them powdered dried foods, and notice how quickly they grow. In three months, you will be able to determine the sex of the fish, and in six months, as they reach their adult size, they will be able to breed. 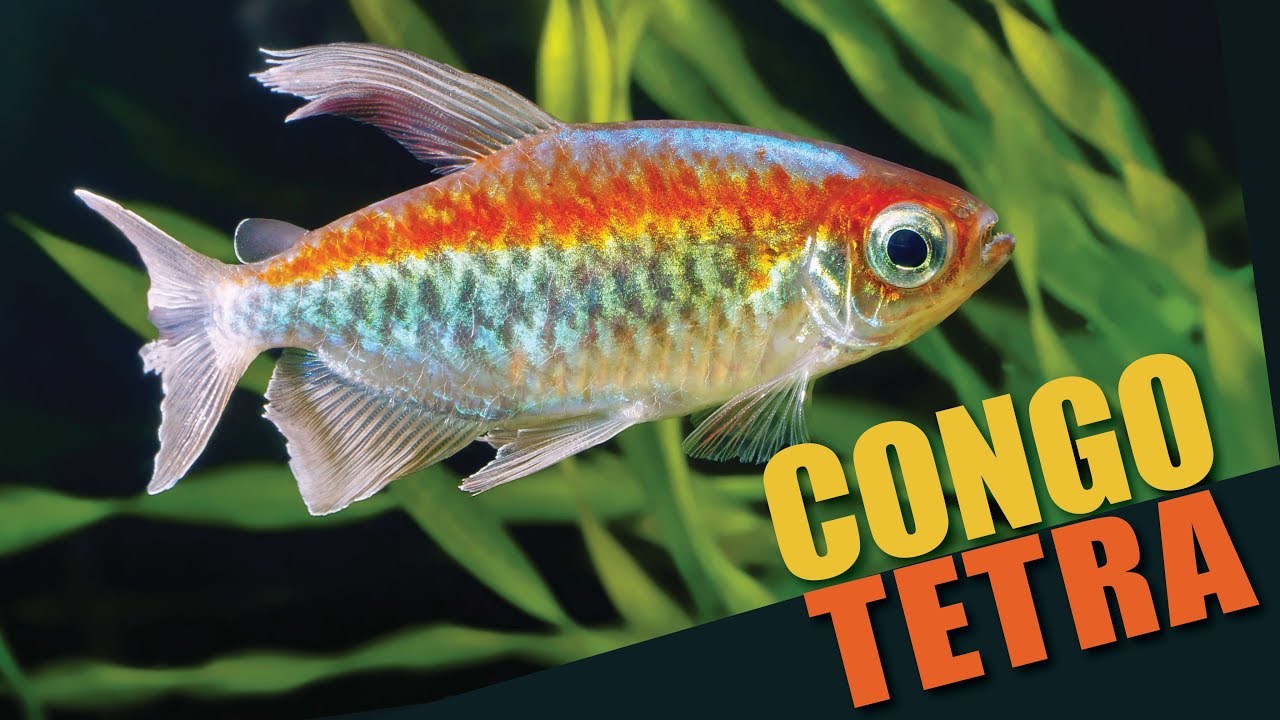 Should You Get a Congo Tetra for Your Aquarium?

The Congo tetra is a perfect fish for you if you are looking for a colorful addition to your aquarium.

Before getting a Congo tetra, consider whether you are comfortable with getting a large tank and taking care of the quality of the water and plants, as this fish requires a lot of space and landscape variety.

Plus, if you have any aggressive fish species in your tank, then a Congo tetra might not be the best option.

April 18, 2021 Robert
About Robert 394 Articles
Robert Woods is the creator of FishKeeping World, a third-generation fish keeper, and a graduate in animal welfare and behavior. He is also a proud member of the Association of Zoos and Aquariums, the Marine Aquarium Societies of North America, and the Nature Conservancy.