The Buenos Aires Tetra is a tropical freshwater fish from South America, discovered in the wild by Carl H. Eigenmann in 1907.

Buenos Aires tetras are popular with aquarists because of the shimmering scales and parcels of red on the fish’s body or fins that add a drop of color to an aquarium.

Like many other tetra fish, Buenos Aires tetras are hardy and don’t require specific conditions to thrive. 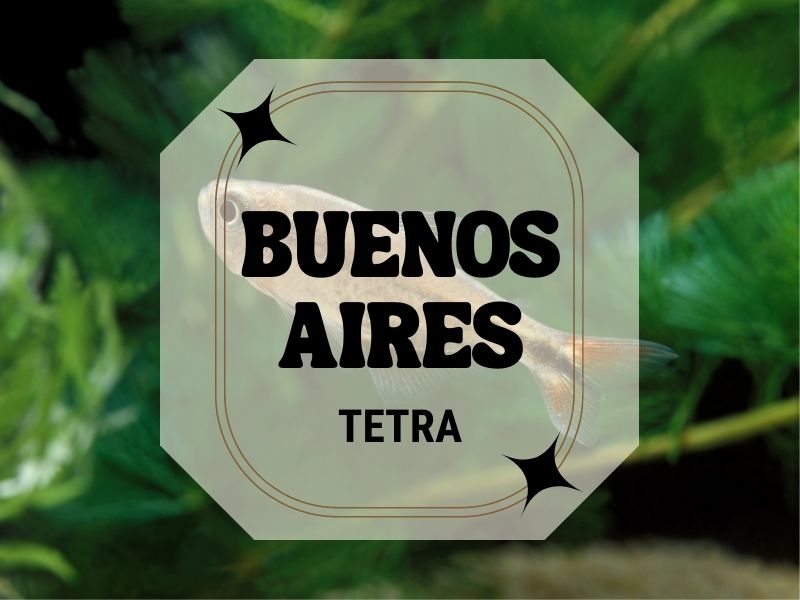 Despite the hardy build and domesticated nature of the Buenos Aires tetra, it is not a beginner fish. Buenos Aires tetras can make a great addition to an advanced aquarist’s collection, and are often used to balance out an aquarium with the right type of life, color, and movement.

Some Buenos Aires tetras will live longer than five years due to selective domesticated breeding. You can keep this tetra in tanks as small as ten gallons, but the fish will not do as well as they would in larger tanks.

Buenos Aires tetras are a little larger than most tetra fish, so do not be fooled by their tiny size when you buy them. They become excited at times and dart around the tank, so they may feel a little cramped in a smaller tank.

The Buenos Aires tetra’s biological family is Characidae, and their subfamilies are Alestidae and Lebiasinidae. Tetra is the shortened version of Tetragonopterus, which is a Greek word for “square-finned” or “four-sided-wing.” The Buenos Aires tetra has been kept in captivity for almost seventy years, so many consider it to be a fairly tame and domesticated fish.

The Buenos Aires Tetra is a little larger than the average tetra and can be quite active, so it may startle or stress out smaller and more shy fish. Put the Buenos Aires tetra in a tank with larger fish, and it will become skittish and stressed. 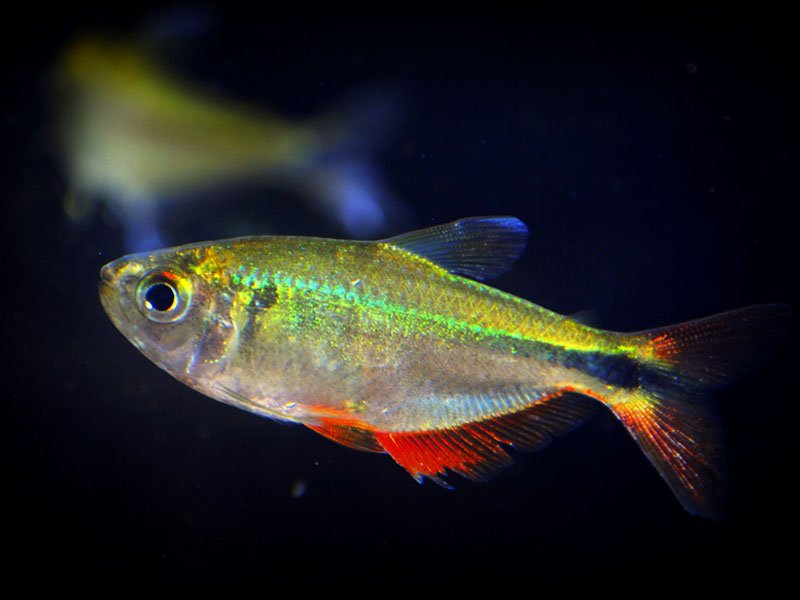 Female Buenos Aires tetras are a little slimmer, and males tend to look a little brighter. You often see mixed sexes in tanks since breeding is unlikely. Breeding the fish is difficult, and any fish that hatch will be quickly eaten by the mature Buenos Aires tetra.

Buenos Aires tetras are a shimmering silver with black patches, red on their fins, and sometimes red stripes on their bodies. Their appearance doesn’t change when they are stressed.

Buenos Aires tetras are not aggressive fish. They will start biting things if they are not well-fed, but are otherwise peaceful and domesticated fish.

Buenos Aires tetras will not become territorial, nor will they harass smaller fish. They may become stressed if they are placed in tanks with significantly larger fish. If stressed, Buenos Aires tetras cower. They don’t swim in a school, and they don’t actively play in their tank.

A Buenos Aires tetra at play may appear like it is having a stress reaction as it will dart around its tank for no reason and act in an odd manner. However, this is just the fish being boisterous, which sometimes happens without any prompting. As the fish ages, this happens less, but changing the scenery outside and inside the tank from time to time can reinvigorate the fish into getting excited again.

Buenos Aires tetras may explore the surface of the tank at length, but too much activity near the water’s surface may suggest the water is not aerated enough.

Though domestic Buenos Aires tetras do not have a strict night and day routine, some people claim that their fish are diurnal (active during the day), though this may be a reaction to the owner leaving in the morning for work and coming home from work at night. Such actions may be prompting the fish to react, especially since they should be fed in the morning and at night to keep them well-fed.

Essentially, the fish have become conditioned to a pattern of behavior and expectation. 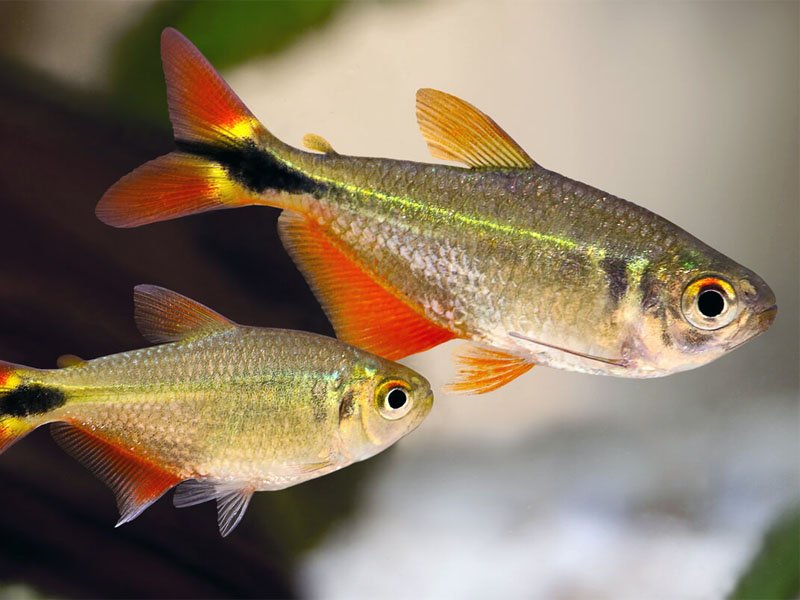 Even though Buenos Aires tetras are not starter fish, they are easy to look after. Give them quality flake food every day in the evening, and maybe a sprinkle of food in the morning if they live with other fish. Suitable frozen fish food may act as a nutritious treat. You might also consider homemade fish food.

Buenos Aires tetras are not prone to diseases, but most die shortly after being bought, usually because they arrive in dirty or algae-infected water that contaminates the rest of the tank.

The Buenos Aires tetra is not prone to certain diseases or ailments. The fish’s biggest problems are almost always during the transition from somebody else’s fish tank to your tank. The most common problem is that the fish arrives with dirty or diseased water, especially if the fish has been traveling through the post for days.

Buenos Aires tetras may arrive with parasites or types of hostile algae. There is also an adjustment period for the fish as they acclimatize to the water conditions of your tank.

The natural freshwater that Buenos Aires tetras normally live in is slightly acidic and warm. Though these are suitable conditions in which to put the fish, Buenos Aires tetras are fine in several other conditions. If you want to breed this fish, then knowing how to manage water chemistry in your aquarium is essential. Monitoring the water temperature and PH are things you will need to consider.

These fish are durable because in the wild they live in conditions that can change very quickly from blisteringly hot to room temperature, or from storms to calm weather.

The Buenos Aires Tetra is a highly active fish and requires a sizable open swimming space. A 20 gallon tank is best for Buenos Aires tetras. Normal aquarium lighting is fine, and room temperatures are okay too. Aquarium decorations such as rocks and places to explore will help to keep the fish active.

Tank flora can be an interesting toy for a Buenos Aires tetra if you do not mind losing a few of the plants from time to time. Ideally, try putting in some sturdy plants like vallisneria, anubias, and Java fern.

Buenos Aires tetras do not like hard water, specifically the phosphates and nitrates that build up as the water evaporates over time. Try to replace the water on a semi-regular basis (set up a routine), aiming to replace around 50% of the water every other week. Consider cleaning out more thoroughly if your aquarium is densely stocked.

Basic flooring or bedding substrate is suitable for Buenos Aires tetras, and you should buy a lid for your tank. During exuberant darting sessions, Buenos Aires tetras have been known to jump high out of their tanks, and even jump over the sides to land on the floor.

The Buenos Aires Tetra will eat smaller creatures such as brine shrimp, and even it’s own young. Otherwise, these tetras are fine with most other fish, even slightly larger fish.

The Buenos Aires tetra will not harass smaller fish and will only become scared if the other fish are significantly bigger than them and/or are bigger and boisterous. In the wild, Buenos Aires tetras feed on worms, plants, crustaceans, and insects. The fish will eat live, frozen, and flake food. Frozen brine shrimp, Bloodworms, or Daphnia can be added as treats, and some vegetables may also make nice treats. You should be feeding your Buenos Aires tetra with high-quality tropical fish flakes.

You can get away with feeding Buenos Aires tetra in the morning, in the evening, and then at night. However, professional aquarists should be feeding the fish several times per day in smaller doses — ideally the amount the fish can consume in three minutes. Over-feeding is not a big problem, but under-feeding may cause issues. Buenos Aires tetras rarely breed. In most cases, the fish will often eat their young before you even notice they have any.

Seek specialist advice if you wish to breed these fish because it is difficult and involves a fair amount of luck. You will need slightly acidic water, and water that is warmed just above room temperature. Advice differs on how the tank should be decorated, and the substrate makes a difference because the fish will scatter their eggs in the hopes a male will fertilize them.

If you are sure fertilization has taken place, remove the adults and carefully replace the water every two weeks, making sure not to let the temperature dip too low. If you do not remove the parents, then you will lose most of the fry because they will be eaten by the parents.

The fish do not have extended courtships or changes in behavior. You can expect around 180 eggs, but hundreds of eggs may be laid.

Keep a close eye on the tank. If you see eggs appear, wait 24 hours for them to hatch. You will see a noticeable difference in how the eggs look when they have hatched into little sacs. At this point, remove the adults, and over the course of a week, you will see the fry eat their egg sacs and start swimming freely. Be careful with filtration systems since some fish can get caught in them. 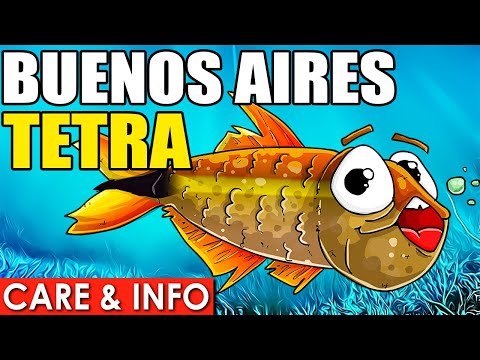 Should You Get a Buenos Aires Tetra for Your Aquarium?

Buenos Aires tetras are hardy fish that have low care requirements, but this doesn’t make them starter fish.

If you are able to feed the fish three or more times per day, and you are not looking to breed, then these fish are simple to keep. Due to their active and passive nature, their domesticated manner, and their unwillingness to harass smaller fish, they can be good additions to your aquarium.

The biggest problem you are going to have is finding a dealer who treats their fish humanely and well. If the fish have been underfed while in captivity, then they will arrive in your tank ready to eat your other long-tailed and long-finned fish, and your plants.

If the tetras have been kept in dirty water, then they will have diseases, parasites, or algae.

November 29, 2021 Robert
About Robert 468 Articles
Robert Woods is the creator of FishKeeping World, a third-generation fish keeper, and a graduate in animal welfare and behavior. He is also a proud member of the Association of Zoos and Aquariums, the Marine Aquarium Societies of North America, and the Nature Conservancy.