Blue cichlids are popular aquarium fish due to their vibrant blue hue.

Although similar in appearance, blue cichlids aren’t the same as electric blue haps.

The main difference between the two fish species is their head shapes: electric blue hap cichlids have more elongated heads than blue cichlids. The blue cichlid (Aulonocara nyassae) is from the Cichlidae family of fish. Blue cichlids evolved from the great lakes in Africa with origins dating back to around 12,400 years ago.

Blue cichlids are native to Lake Malawi in East Africa. In the wild, the fish swim at depths of 82 feet (25 meters) around rocky coasts.

Blue cichlids hide in cracks or crevices while waiting for prey.

As carnivores, blue cichlids prey on the fry of other fish, such as those of the mbuna and other Haplochromine cichlids.

In a good tank environment, a blue cichlid’s lifespan reaches an average of eight years.

Blue cichlids are easily purchased in pet stores. Online shops such as LiveAquaria also sell these fish. Prices range from $6 to $8 USD per fish on average. 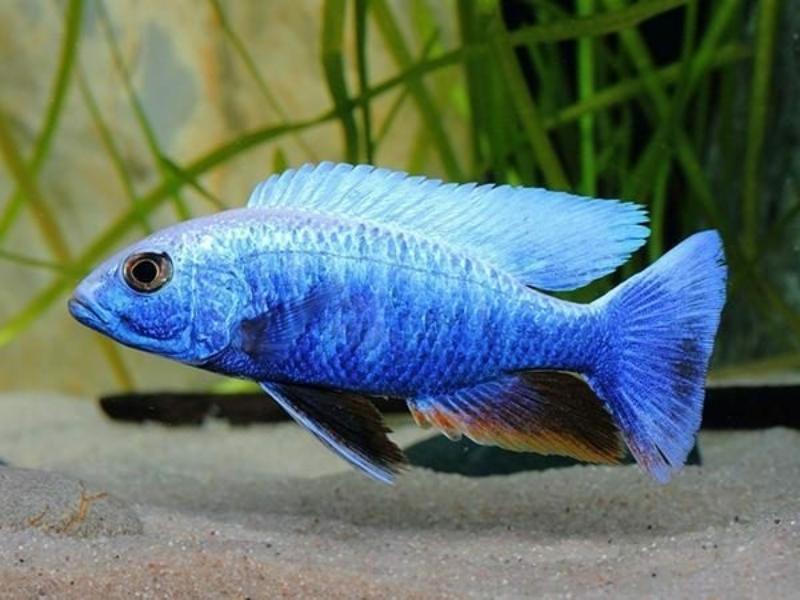 Blue cichlids are often mistaken for another blue species of fish, the electric blue hap cichlid.

However, the electric blue hap cichlid is less common than the blue cichlid, and the two species have different head shapes.

Although there are some variations in blue cichlids, the fish are all characterized by a vibrant blue color. Stripes of a darker hue run from the gills to the tail fin.

Depending on the fish’s mood, especially during spawning season, the stripes on the male darken.

Due to changes brought by factors such as geographic location and molecular processes, there are several color variations of the blue cichlid.

The color patterns in cichlids affect how the fish choose their mates.

Male and female blue cichlids differ in appearance. Females have a less vibrant bluish gray color compared to the males.

Males have red and orange accents along their fins and a prominent white line that runs through the fish’s spine. Females have light yellow and blue accents.

Young blue cichlids are gray, and as the fish mature, the cichlids start to develop the intense blue color. If a blue cichlid turns yellow, this is a sign of stress.

Blue cichlids have aggressive tendencies. The males are more aggressive and territorial than the females.

Aggressive tendencies lessen when the fish are able to exhibit dominance. Adding four females to the tank for every male is helpful in reducing aggression.

Blue cichlids are fast swimmers that like to hide in between cracks and crevices. In the wild, male blue cichlids build cone-like structures in the sand to entice the females for spawning.

Blue cichlids are easy to care for as long as you provide the proper environment that the fish need.

The only challenge in taking care of blue cichlids is to look for suitable tank mates because of the fish’s aggressive nature.

Space and hiding places are ideal to give the fish the territory that they need.

Blue cichlids are carnivores and require food that is high in protein.

Blue cichlids are a hardy fish species and they aren’t prone to disease. However, the fish can still get sick under poorly maintained conditions, or from eating a poor diet.

Some of the diseases that can affect blue cichlids are:

Malawi bloat is typical in freshwater fish when dietary needs are not met. This disease is characterized by an enlargement of the abdominal area that can be seen from any angle. Feces turn whitish and the fish will spit out food.

To treat Malawi bloat, isolate the affected fish in another tank. Make sure your water temperature is ideal and add 1/8 teaspoon of Epsom salt to every five gallons of water for two weeks.

Ich is a disease caused by parasites that occurs when the right water temperature isn’t met. It is also known as white spot disease and is characterized by the appearance of white nodules on the fish.

The window for treatment of ich is limited so you should constantly observe your fish for signs of this disease.

To treat ich, increase water temperature to  80–85°F. Adding chemicals and salt to the water helps in treatment, too.

In its natural habitat, the blue cichlid is accustomed to living in shallow, rocky shores, so you should simulate this in captivity by adding rocks to your tank.

Male blue cichlids build cone-like formations from sediments in the rocky areas where the fish are found.

Replicating this environment in a tank will help to make the fish feel at home and encourage breeding.

Blue cichlids are powerful swimmers, so space is needed when taking care of the fish.

Males are territorial and need lots of space to lessen the fish’s aggressive tendencies towards other males.

Blue cichlids are known to produce a lot of waste so it’s imperative that you get a good filtration system for your blue cichlid tank.

To simulate the fish’s natural environment, add a rocky, sandy substrate to the tank. Terracotta pots can be used as an alternative to rocks.

Make sure that your fish have plenty of places to hide, because hiding is part of the blue cichlid’s natural behavior when in the wild. There are two things to remember when choosing tank mates for your blue cichlids:

Don’t get small fish as tankmates for blue cichlids because the fish risk becoming a part of your blue cichlid’s diet.

Blue cichlids fit best with other species common to Lake Malawi. Among these are:

Blue cichlids are predatory carnivores that accept most kinds of food in captivity.

Large sinking pellets that are high in protein are good options because blue cichlids feed on small fish in the wild.

You can supplement protein pellets with the occasional feeding of frozen food like brine shrimp, krill and fish filet.

Feed blue cichlids three to four times in a day, making sure that the amount given is enough for the fish to consume within a span of thirty seconds.

Breeding blue cichlids is easy as long as there are more females than males in the tank.

Blue cichlids are mouth brooders. This means that the female will release its eggs onto a mound created by the male.

The egg is caught by the male using the fish’s fin, and the male releases milt on each egg.

The egg is picked up again by the female in the fish’s mouth for fertilization to begin. The female can pick up as many as 30 top 70 eggs at once.

The eggs are hatched into fry after three weeks.

Ideal water temperatures for spawning are between 77 and 82°F.

Should You Get a Blue Cichlid for Your Aquarium?

As long as you’re aware of the fish’s behavior, ideal environment, and basic nutritional needs, you’ll enjoy raising blue cichlids in your home.