The Blue Zebra Cichlid stands out against others with its electric blue colors that will light up every cichlid tank. You need to see it with your own eyes.

Like many cichlids though, their temperament can be a lot to handle. This can be difficult for beginners to deal with, so some fishkeeping experience is useful.

The Blue Zebra Cichlid goes by a few names, such as the Cobalt Zebra, Cobalt Blue Zebra, or Cobalt Blue Mbuna. Their scientific name is Maylandia callainos and they’re part of the Cichlidae family.

They were originally classified in the Metriaclima genus, but this was later changed.

They are a freshwater species of African cichlid from Lake Malawi, which produces other popular aquarium species like Peacock Cichlids.

These are not recommended as beginner fish. Though their needs are fairly simple, some experience is useful to deal with their territorial nature.

Blue Zebra Cichlids are a popular species so you will likely find some in any pet stores selling cichlids. They will cost in the range of $10-$20.

Always check for signs of disease before buying individuals though.

In a healthy tank, each fish could survive for up to 10 years.

Aggression is very common among these fish. They will claim a territory around caves and crevices and defend it once they have become established in the tank.

They spend most of their time in the lower levels of the tank, hiding among the rocks and returning regularly to their territory. Though it has “zebra” in the name, this species shows very little evidence of banding. They have a consistent light blue covering their entire body.

There are other color varieties, like the Pearl Zebra, Red Zebra, and Orange Blotch.

A fully grown adult will reach up to 5 inches. The body has spiny fins attached, most notably a long dorsal fin stretching from just behind the head to the tail.

On their head is a large black eye and big open mouth.

Females tend to be a bit smaller and duller in color. 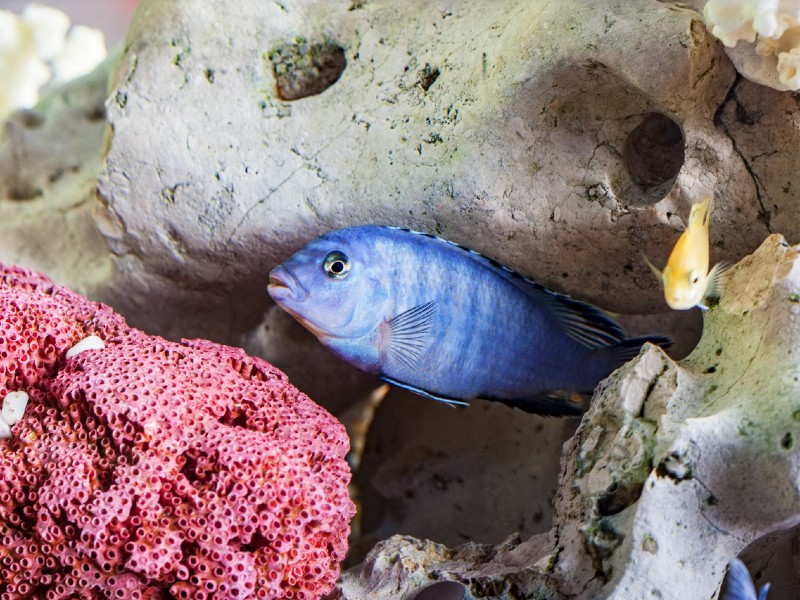 Blue Zebra Cichlids are endemic to Lake Malawi in Africa. They settle in rocky areas at the substrate near the shoreline. This is why they are also known as “Mbuna”, which means rockfish.

Anyone looking to add these fish to their aquarium should be aiming to design an environment as similar to their natural habitat as possible. Luckily, this isn’t too difficult.

Layer the bottom of the tank in either sand, crushed coral, or a mix of both.

On top of the substrate, you will need to spread out various rock formations to act as separate territories for different fish. Leave some open swimming spaces too though.

Adding live plants is also a good idea, but they will need to be hardy species so they can withstand high pH and any abuse from your fish.

Agitating the surface of the water is important for properly recreating their natural habitat. You can do this with a filter outlet or an air/water pump.

These fish reach 5 inches long, which means they take up quite a lot of space, but they need extra space to form their territories.

A 50-gallon aquarium or larger is essential.

The aggression of Blue Zebra Cichlids can cause compatibility problems, so tank mates should be of a similar size and with the ability to defend themselves.

Most compatible options are fellow Mbunas, such as Auratus, Pindani, Kenyi, and Red Zebra.

Many aquarists choose to design a Lake Malawi tank, but these fish are too aggressive to be kept with Peacock Cichlids.

You can keep Blue Zebra Cichlids fish together, but males will show aggression towards each other.

One way to get around this is to keep one male with 2-3 females, which will keep aggression low.

Another way is to “overcrowd” the tank so that males are not able to establish territories. This will produce less favorable conditions for your fish though.

You will need a very large tank if you want to keep multiple males with their own territories. Once a tank has been established, day-to-day care is easy. The problems come when designing a tank and trying to reduce aggression.

If you have done this successfully, you’ll generally just have to feed them regularly and keep the tank clean. Perform regular partial water changes and keep algae levels low.

Use a water testing kit each week to catch changes in water conditions before they can cause issues.

Diseases are rare, but one to be aware of is Malawi Bloat. This presents as a swollen abdomen, loss of appetite, and fast breathing, but will eventually lead to liver and kidney failure.

Malawi Bloat is more common in poor water conditions. There are effective medications available if you spot the problem early enough.

This species is an herbivore, so vegetable matter will make up the vast majority of their diet.

They will accept most commercial foods. Dried foods are easy options, such as herbivorous flakes and pellets, but these have a low nutritional value so try to mix in some other foods to their diet too.

You can even add some leftover green vegetables from your kitchen, such as spinach, lettuce, and broccoli. Cut these into small pieces, or you could use them to make homemade fish foods.

Feed them an amount they can finish within 2 minutes. Do this 2-3 times a day.

Breeding is possible in captivity. You will need 1 male with 3-4 females. The aquarium must be clean with the perfect parameters.

A male will establish a territory, which is where a pair will mate. The female will release a few eggs and pick them up in her mouth, the male will then release sperm to fertilize them.

This process is repeated until the female has up to 50 eggs in her mouth. The eggs stay in her mouth until they hatch after a week.

The fry will then retreat to the safety of the mother’s mouth for up to a month until they are strong enough to look after themselves. Raising the fry is solely the mother’s job and she will eat less while mouthbrooding.

Are Blue Zebra Cichlids Suitable for Your Aquarium?

Aquarists who have kept fish before will likely be well capable of caring for these fish.

Their needs are relatively simple, but their aggression can be too much for beginners that aren’t confident about dealing with it.

If you’re certain that these things aren’t a problem, Blue Zebra Cichlids will make excellent additions to your setup.

Which tank mates do you keep with your Blue Zebra Cichlids? Let us know in the comments below…