The bala shark is a freshwater species of the Cyprinidae family. Bala sharks have gray or silver bodies with long, pointed yellow or gray fins edged with black.

Bala sharks are popular with aquarists due to their shark-like body shapes and striking fin patterns. These peaceful shoaling fish are less aggressive and territorial than actual freshwater sharks. Bala sharks are native to the clean, freshwater rivers and lakes of Southeast Asia, including around the Malay Peninsula, in the Chao Phraya and Mekong basins, and in the waters surrounding Sumatra and Borneo.

Bala sharks are an endangered species that are rarely found in the wild. Overfishing for the aquarium trade and forest fires in 1975 are two possible causes for the decrease in the wild population of bala sharks.

The natural habitat of the bala shark is warm and densely vegetated, with a muddy, pebbly substrate. Bala sharks prefer fast-flowing waters, and swim in the midwater regions of their habitat.

The average lifespan of a bala shark is between eight and ten years.

Bala sharks can be purchased online easily, but the fish are difficult to find in small, local fish stores. When buying a bala shark, make sure the fish has been bred in captivity, to protect the species’ wild populations.

The typical cost of a bala shark is $7 to $10. You can buy them from the following reputable online stores: 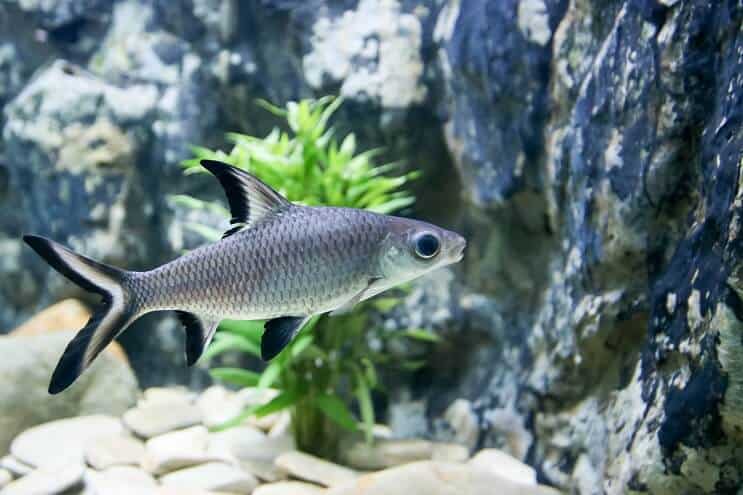 The bala shark isn’t a real freshwater shark. The fish is called a bala shark because of its long, pointed dorsal fin, which resembles a shark’s fin.

Bala sharks have long, torpedo-shaped, silvery-gray bodies with silver or yellow fins edged with black. The fish’s ventral fins are small and colored black or gray. Its body is lighter gray at the top than at the bottom.

The bala shark’s small, closely-packed scales are iridescent, meaning that they reflect light as the fish moves, creating a shimmering appearance.

The bala shark is a peaceful fish that gets along well with other peaceful species in a community tank. As a shoaling fish, the bala shark feels most comfortable when housed with at least four other fish of its kind.

Bala sharks are fast, active swimmers that dart around the middle of the tank. As diurnal fish, they are more active in the day than the night.

Bala sharks are timid and easily scared, and spend a lot of time hiding in caves and behind plants. Caring for bala sharks is easy as long as you provide stable water conditions and enough space for these active swimmers to explore. House bala sharks in a freshwater tank and feed them an omnivorous diet.

The bala shark’s natural habitat is lakes and fast-flowing rivers and streams in Southeast Asia. These fish are used to warm waters with a pebbly or muddy substrate.

Set up your bala shark’s tank to replicate the fish’s habitat in the wild. Fully-grown bala sharks should be housed in a tank of at least 150 gallons, at least 5 feet across. The longer the tank, the more space this middle-dwelling fish has to explore.

Bala sharks don’t swim along the bottom of the tank or dig in the substrate, so there’s no need to use a specific type of substrate. However, a dark-colored pebbly substrate, around ½ an inch thick, is closest to the substrate found in the fish’s wild habitat.

There’s also no need to fill bala sharks’ tanks with rocks or plants. However, a few plants, like anubias, can make them feel more at home in captivity and provide a hiding place for tired or nervous fish. Plant vegetation around the edges of the tank to prevent disruption to the swimming areas.

Bala sharks are known to jump out of the tank, especially when settling into their new environment, so a secure lid on top of the tank is essential.

The ideal tank conditions for bala sharks are:

The essentials for a bala shark’s tank are a powerful external filter, natural tank lighting, and a high-quality water heater.

These fish are sensitive to changing water parameters, so maintaining consistent water parameters and carrying out regular 20–30% water changes are essential to prevent disease and stress.

Bala sharks aren’t vulnerable to specific diseases, but there are several freshwater diseases that affect these fish when they are housed in poor tank conditions.

Dropsy is a buildup of fluid inside the fish and is usually a symptom of a bacterial or parasitic infection. Fish with dropsy appear bloated and have protruding eyes, scales that stick out from the body, loss of appetite, lethargy, and rapid breathing.

To treat dropsy, add ⅛ teaspoon of Epsom salt to every five gallons of water in the tank, and speak to your veterinarian about antibacterial medication for the disease

Bala sharks can be affected by several external parasites, including anchor worms, fish lice, and flukes. External parasites can be seen attached to the body or gills of the fish, and are introduced to the tank through new fish, live foods, or plants.

Ich is one of the most common skin diseases amongst captive freshwater fish. Fish with Ich have white spots on their scales and are often seen flashing (or scratching) against rough surfaces in the tank.

Treat ich by removing the affected fish and placing them in a quarantine tank containing water that is a couple of degrees warmer than the home tank’s temperature. Add one teaspoon of salt per one gallon of water in the tank. Bala sharks are peaceful fish that can be housed with other medium-to-large, peaceful fish. Don’t house them with aggressive or carnivorous fish like neon tetras.

Don’t add non-fish species like shrimps and crabs to a bala shark tank, because they are known to eat crustaceans.

In the wild, the bala shark’s diet consists of insects, small crustaceans, plant matter, algae, and larvae. Provide a similarly varied diet in captivity with a combination of live and dried foods.

High-quality dried food, like flakes and pellets, should make up the bulk of the bala shark’s diet. Look for nutritious foods that provide the vitamins, minerals, and proteins needed for these fish to grow to their full potential.

Diversify feeding by adding live, high-protein foods like bloodworms and shrimp to the tank, and regularly feed the fish plankton, diced fruits, greens, and vegetables to fortify the fish’s health.

Bala sharks should be fed up to three times per day. To avoid overfeeding, feed the fish an amount it can eat within about two minutes. No additional supplements are required as long as the fish has a balanced, diverse diet. Breeding bala sharks is moderately difficult and best attempted by aquarists with fish-breeding experience. Bala sharks become sexually mature at around six months old, or when the fish have grown to four inches long.

Should You Get a Bala Shark for Your Aquarium?

Bala sharks are unique-looking fish that provide plenty of entertainment in a home aquarium.

Despite needing a larger tank than most aquarium fish, bala sharks are peaceful and beautiful to look at, making them a fantastic choice for people who have enough tank space to house the species.

14 Most Popular Types of Molly Fish

April 24, 2021 Robert
About Robert 468 Articles
Robert Woods is the creator of FishKeeping World, a third-generation fish keeper, and a graduate in animal welfare and behavior. He is also a proud member of the Association of Zoos and Aquariums, the Marine Aquarium Societies of North America, and the Nature Conservancy.