The dragon scale betta is a popular species of freshwater tropical fish. There are over 70 varieties of betta fish. Many of them have been created through cross-breeding. Some have even been genetically modified to create a specific look or characteristic.

The betta is also known as the Siamese Fighting Fish. This name relates to the betta’s origin, as well as its temperament.

The betta was originally native to areas of Southeast Asia, such as Thailand, Vietnam, and Cambodia. Thailand used to be known as Siam, which is where the Siamese part of the name comes from.

Betta is known to be aggressive fish. The male of the species, particularly, has a highly aggressive temperament, and he will turn on and attack any other male of the same species. Hence the name Siamese fighting fish.

The dragon scale betta is a beautiful-looking fish with extremely unusual scales. It has been created by cross-breeding other varieties of the species, and was first released in 2004. The dragon scale betta is one of the more recently developed species of tropical freshwater fish. Its striking colors and unusual scales make it stand out from other fish, making it very popular among aquarists who enjoy their home aquarium.

The scientific name of the dragon scale betta is the Betta splendens. These fish are often commonly referred to simply as the betta. These are all freshwater fish that fall under the scientific family of Osphronemidae.

All betta are ‘anabantoid’ fish. They have a labyrinth organ. This is a unique feature that enables the fish to inhale oxygen from above the surface of the water.

The male dragon scale betta has a very aggressive nature. He will not be able to resist attacking other males of the same species. This is why bettas are also known as Siamese Fighting Fish.

The dragon scale betta male is well-known for his extremely aggressive and belligerent tendencies. He will attack any other male bettas that he perceives as a threat to him or that he thinks may invade his territory.

Because of its aggressive temperament, it is often necessary to keep the male betta isolated in his own aquarium. This will prevent outbursts of aggression and battles between your fish.

However, if it suits you to keep your dragon scale betta together in an aquarium with other fish, it is a good idea to choose his tank mates very carefully. He should only share a tank with smaller fish, which is known to be placid and calm in nature. The dragon scale betta looks quite different from all other varieties of betta. While it does have some of the typical features of the betta species, such as the bright coloring in the tail, this variety has a completely unique appearance.

Many varieties of betta have evolved as a direct result of careful cross-breeding. Seasoned aquarists have tried to create new varieties in order to keep the species popular and to maintain interest in the species.

The striking colors of the betta species have made these tropical freshwater fish extremely popular over the years. They are commonly found in bright shades of red, orange, yellow, and green.

However, with the dragon scale betta, even though the underlying body is brightly colored, the colors do not appear to be quite as striking, as they are covered with a layer of thick, white scales that resemble dragon-like armor.

It is these scales that give it the name ‘dragon scale betta’. The bright colors of the fish are visible in the tail and around the gills and fins, but the body of the fish has only a faint glow of the original color, visible under the white scales.

The scales have a metallic sheen to them, giving them the appearance of an ancient suit of armor. They have a darker rim around the edge of the scales, making them even more noticeable.

Dragon scale bettas are not very big, with the male growing to a maximum length of about 2 ½-3 inches. The fully grown female is slightly smaller than the male.

The dragon scale betta originates from a species that is native to the marshy rivers of Southeast Asia. Therefore, it does not like extremely cold water and should be kept in an aquarium that is mildly warm.

The rivers of Southeast Asia do not have strong currents or rapid movement. The dragon scale betta likes the water in its tank to mimic these conditions, with only a soft, gentle current and water flow.

The dragon scale betta prefers an aquarium with moderate water parameters. It will not survive in extreme conditions.

The water temperature in your dragon scale betta’s tank should ideally be kept at 75°-76° Fahrenheit. You may need to invest in a water heater in order to keep the temperature stable.

The dragon scale betta is likely to become more susceptible to illness if the water is too cold. He will also lack energy and become less active.

The current in the water should be gentle and slow because the dragon scale betta does not enjoy strong currents with rapid movement.

The dragon scale betta cannot tolerate hard water. The dGH (degree of General hardness) of the water in the tank needs to be kept at between 5 and 20.

Keep the pH of the aquarium water at between 6.8 and 7 in order to keep your Dragon scale betta happy and healthy.

The dragon scale betta likes to swim amongst plants and rocks. He enjoys hiding in little spots and will sneak behind the rocks and into crevices. A couple of pieces of driftwood in the aquarium will also give him another place to hide.

The dragon scale betta likes to have plenty of space for swimming. The ideal tank size for this fish is a 5-gallon tank.

If he will be sharing his tank with other small fish, you will need an even bigger tank.

The dragon scale betta male is a highly aggressive fish, so tank mates should be selected very carefully.

The male dragon scale betta will probably turn on other male bettas, but it is possible to pair him up with other small, placid species of fish.

The dragon scale betta is a carnivore. It will enjoy fresh meat such as live bloodworms, brine shrimp, and mosquito larvae. They can also be fed freeze-dried or frozen food.

Take care not to overfeed your dragon scale betta. It should only be fed a small amount of food, twice a day. The dragon scale betta is not too difficult to care for, but the guidelines for the tank conditions as set out above should be followed.

The tank must be cleaned regularly, in order to avoid a build-up of algae and other dangerous organisms.

The level of the water parameters should be carefully controlled at all times. Calcium, magnesium, and other mineral levels in the water need to be checked regularly and adjusted where necessary.

Breeding the dragon scale betta can be a little complicated. This variety has already been cross-bred to produce its unique appearance.

If you want to breed more tropical fish with the same characteristic ‘dragon-like’ scales, you will need to ensure that both your male and female are true dragon scale bettas with strong dominant genes.

Is the Dragon Scale Betta Suitable for Your Aquarium?

The dragon scale betta is an unusual fish that many aquarists would like to have in their tank.

As long as your home aquarium fulfills all of its basic needs, in terms of both tank conditions and tank mates, you should be able to keep this special fish in your tank. 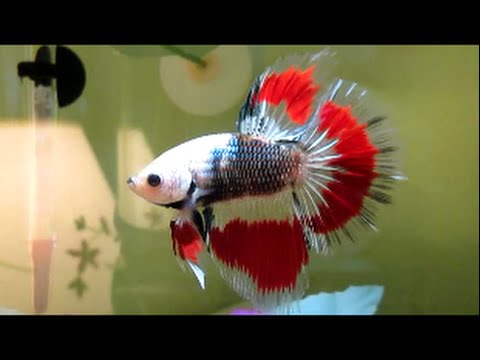 June 13, 2022 Robert
About Robert 454 Articles
Robert Woods is the creator of FishKeeping World, a third-generation fish keeper, and a graduate in animal welfare and behavior. He is also a proud member of the Association of Zoos and Aquariums, the Marine Aquarium Societies of North America, and the Nature Conservancy.