The clown loach (or tiger botia) is one of the most popular aquarium fish due to its distinct colors and playful behavior.

This fish, as part of the greater loach family, is sure to liven up any aquarium and put a smile on the face of both beginners and experienced fishkeepers alike.

In this article, we cover all the essentials from setting up your aquarium, what to feed them, tank mates, and much more. 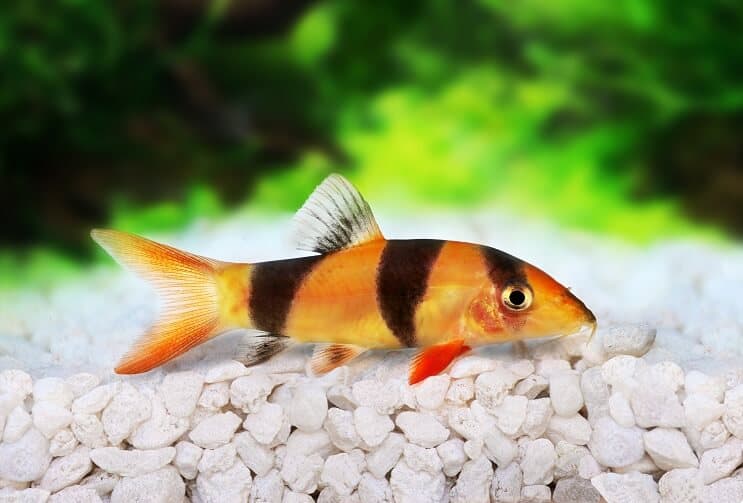 This species was first described in 1852 by Dr. Pieter Bleeker when it was given the name Cobitis macracanthus. Since their discovery, Clown Loaches have been renamed twice.

The Clown Loach is a tropical freshwater fish species of the family Botiidae. They are native to the Indonesian islands of Borneo and Sumatra.

They live in the flowing rivers for most of the year and at the start of the monsoon season retreat further upstream and inhabit smaller streams that are full of plant life to spawn and give rise to the next generation of these intriguing fish.

This species has been extensively harvested from their natural environment for the aquarium industry for at least the past few decades.

Although, they are still relatively abundant across their home range.

These fish tend to live for up to ten years.

They can be purchased from most local pet stores for around $9 each, but most places offer a slight discount when purchased in shoals.

Clown Loaches are extremely social and peaceful fish that are often found closely foraging in the substrate.

They are best kept in large community tanks in a shoal containing at least 5 individuals. If you keep less than 5 you will find them to be very timid and shy, spending most of their time hiding.

These fish are playful by nature and enjoy chasing each other around the tank.

They have strange behaviors and can often be found lying on their side at the bottom of the tank appearing dead – don’t worry this is completely normal behavior for them.

These fish have a complex hierarchy and are usually female alpha. The younger fish tend to shadow the alpha, copying their behaviors and movements. Their bodies are laterally compressed and have a deeply forked caudal (tail) fin which propels them through the water.

Clown Loaches do not have scales, but instead, produce a mucus layer for protection.

This species is orange, with three black bars. One over the head and eyes like a mask, one across the dorsal fin towards the caudal fin, and the other is between those two.

Whilst the possession of black dorsoventral bars is usually an indicator of aggression, this is certainly not the case for this playful and friendly species.

Clown Loaches have two pairs of barbels on their snout to help them sift through the substrate to search for food. They also have a lateral line system (like most fish) which senses changes in water pressure and alerts the fish to possible predators.

In the wild, there are two genetically separate populations from Sumatra and Borneo.

The Sumatran populations have reddish-orange pectoral fins, whereas fish from Borneo have fins with black pigmentation.

An albino/platinum form is also present in this species, although it is rare. This color morph still has the orange background coloration, but the black bars are replaced by white ones.

Clown Loach can grow up to 12 inches, however, as juveniles, they are around 2-3 inches in length.

In the wild, these fish live in clear slow-flowing rivers and streams of the islands. During the monsoon season, they migrate upstream and into flood plains that are full of plant life, both floating and submerged.

At the peak of the monsoon season is when these fish spawn in small streams and flood plains.

The waters they occupy range in temperature from 77-86°F and have a pH of 6-8. These fish prefer subdued lighting and choose to live in areas where there is a lot of floating and overhanging plant life, or areas where river banks overhang.

These areas also provide the fish with cover from predation and can reduce the stress levels of the fish. These kinds of areas will be essential in the tank.

The rivers are made up of a rocky pebble substrate and the flood plains contain muddy substrate with plenty of growing plants.

In the aquarium, you may want to provide a mixture of substrates like pebbles as well as sand to give the tank a more natural feel.

Subdued lighting is key as these fish will become more active in darker conditions. This can be achieved through adding floating plants like Riccia Fluitans, Java Moss, Hornwort or Water Spangles.

Submerged plants are also essential and hardy species like Amazon Sword plants would be a perfect match for Clown Loaches.

These plants not only provide the aquarium with shade but also aid in aerating your tank by producing oxygen. They also provide a form of filtration as well as areas to play and hide.

The water temperature of the tank should be set as close as possible to the upper tolerance limits (86°F), as they tend to survive longer at higher temperatures and are less susceptible to diseases like Ich.

The water pH should always be maintained at an optimal range of 7.4-7.8, although slight fluctuation between 7 and 8 will be fine.

As with most aquariums, you will also need a heater and filter.

A group of these Loaches should be kept in a minimum 75 gallon aquarium as juveniles.

5 adults will need at least a 150-gallon tank – allow roughly 30 gallons of water per loach. In their natural habitat, they can be found in the same waters as Tiger Barbs, Hard-lipped Barb, Spotted Eel-Loach, Barred Rainbowfish, Comb-Spined Catfish, and even Asian Arowana.

In the aquarium, these fish will do well with nearly all community fish like Cherry Barbs, Tiger Barbs, Neon Tetra, and Black Widow Tetra.

Other good tank mates for this species would be other bottom-dwelling fish such as Kuhli Loach, Bristlenose Pleco, and the Borneo Sucking Loach.

Species of Cichlids can also be kept with Clown Loach providing they are non-aggressive and share roughly the same water parameters.

The Bolivian Ram and other South American Cichlids like Angelfish and Leopard Pigeon Discus are all great examples.

A good invertebrate tank mate would be species of freshwater lobster or crayfish like the Blue Lobster and even freshwater crabs like the Red-Clawed Crab (providing they are kept in a paludarium as it is not a fully aquatic species).

You should always avoid keeping Clown Loach with any predatory fish.

It is highly recommended that these fish are kept in social groups due to their pack mentality. Being kept on their own will cause them to become shy and they will spend most of their time hiding.

Being kept in groups of 5 or more will cause a dramatic shift in their behavior causing them to become extremely active in the mid and lower levels of the tank. As with most species of Loach, they are extremely susceptible to ich (also known as white spot disease).

This is an ectoparasite that burrows into the gills and skin of fish and can also lead to fungal and bacterial infections. Loaches are usually the first fish to become infected due to them not having scales.

It can be extremely hard to spot during the early stages, but as it progresses you will notice your fish scratching against the sediment and ornaments.

Once identified, fish should be removed from the aquarium and placed in a separate quarantine tank for a month or so.

Whilst in quarantine fish should be treated for Ich using chemicals like Copper sulphate or Formalin-based medications.

Alternatively, your local pet and aquarium stores will sell Ich cures over the counter.

Remember good water quality is essential for Clown Loach, so be sure to keep on top of all weekly water changes and tests, as this fish is sensitive to nitrates.

Tri-weekly gravel/substrate vacuums will remove parasitic spores from the aquarium. And water temperatures should always be kept at the upper level of Loach’s tolerance limits (86°F). In the wild, this omnivorous species feeds on invertebrates like worms, crustaceans, and small water-dwelling snails. In addition, they also feed on decaying plant matter and algae.

Their dietary requirements can be met in your home aquarium quite easily.

You should feed them a mixed diet of sinking shrimp pellets and algae wafers. They will also do a great job of eating any leftover fish flakes which sink to the bottom of the tank.

Frozen foods like shrimp and blood worms will support the healthy growth of the fish but should only be fed a few times a week.

Live foods like bloodworms, earthworms, and small shrimp are considered a delicacy to Clown Loach and should be fed once a week as a treat.

These fish also love snails and we certainly recommend that you feed snails to your Loach.

You could set up a separate smaller tank and begin breeding snails as live food for your Loach which we are sure they would greatly appreciate. If not, snails are readily available at local fish stores or can be purchased online and delivered to your door.

Feed your fish small amounts of food, two times a day and make sure that there is no waste.

These fish are not the easiest fish to breed and even expert fish keepers can find it difficult.

For the best chance of breeding success, we recommend you follow the steps outlined below.

First, you must find a sexually mature pair (around 6 inches in length). Keep them in separate tanks for a few weeks and feed them highly nutritious foods. Females will appear to have a larger width during this period indicating the production of roe.

When the female appears larger, the male and female should be placed in an aquarium with lots of plants and excellent water quality.

When the female has released her eggs and the male has fertilized them, the male and female should be removed to avoid them eating the eggs.

If successfully hatched, the tiny fry can be fed live cultivated infusoria. As they begin to grow, they should be moved onto baby brine shrimp, tubifex worms, and even ground-up fish flake food.

Are Clown Loaches Suitable For Your Aquarium?

Clown Loach is an extremely social species and would make a great addition to any community tank.

They are best kept by people with previous fish keeping experience, due to the fact they are more susceptible to diseases than other aquarium fish.

You will notice they enjoy spending most of their time in the lower levels of the aquarium, eating leftover foods. They are like a pack of aquarium puppy dogs, chasing and playing with one another throughout the day.

These fish are so much fun and are sure to have you jumping for joy if you decide they are the fish for you.

If you are looking for another type of bottom-dwelling fish and this fish isn’t the one for you to check out our article on plecostomus.

Are you thinking of keeping Clown Loach? Let us know in the comments section below…

January 19, 2019 Robert
About Robert 454 Articles
Robert Woods is the creator of FishKeeping World, a third-generation fish keeper, and a graduate in animal welfare and behavior. He is also a proud member of the Association of Zoos and Aquariums, the Marine Aquarium Societies of North America, and the Nature Conservancy.