With more than 300 different species of shrimp, you’ll see a great variance in size, disposition, and lifespan. Of course, not all of those 300 are available in the aquarium trade, but their general compatibility with other creatures and their helpfulness as tank cleaners has made freshwater shrimp more popular in the aquarium hobby.

Enter the Whisker Shrimp, which flies in the face of everything you know about shrimp. These aggressive crustaceans will consume smaller fish, other shrimp, and even snails, although snails are often cited as plausible tank mates.

Of course, there are ways of decreasing their aggressive behavior, mostly by attending to their ravenous tendencies and by affording them copious amounts of space.

Visually, Whisker Shrimp are really fascinating. They are almost completely transparent, so you can see their organs. They add an eerie but appealing aesthetic to any home aquarium.

In this article, I’ll explore the tendencies of these see-through crustaceans, discuss their appearance, including distinguishing them from the popular Ghost Shrimp, and offer best practices for habitat, water parameters, and diet.

It is possible to control the aggressive behavior of Whisker Shrimp to a certain extent, but you may decide that keeping them in a dedicated tank is the best option for you. Shrimp are known throughout the aquarium hobby as great tank cleaners, so adding a few shrimp and snails to limit ammonia levels and algae growth has been gaining popularity for a while.

One of the more interesting aquarium shrimp available in the trade is the freshwater Whisker Shrimp, also sometimes referred to as the Indian Whisker Shrimp or Kuncho River Prawn.

Whisker Shrimp, the scientific name Macrobrachium lamarrei, are native to Nepal. They are popular among hobbyists because Whisker Shrimp’s intense appearance really adds to the ambiance of the aquarium.

However, their aggressive tendencies can not be overlooked, and when curating your tank, you need to consider what the collateral damage could be to the other aquarium inhabitants. You don’t want to wake up one morning and find out you have fewer mouths to feed because your Whisker Shrimp were having their breakfast.

It should be noted that although Whisker Shrimp are the aggressors with other shrimp species and small fish, they are often at risk from fish that are larger than they are.

You may get tired of hearing me repeat how aggressive Whisker Shrimp are — after all, they’re only 2 inches long. But the real dangers can not be overstated. I have heard of numerous hobbyists who have lost other shrimp and small fish to the sharp and plentiful teeth of the Whisker Shrimp.

I’m talking about dismemberment–it is not a pretty story.

There are ways of deescalating the aggression of Whisker Shrimp. The most obvious method is to keep them in a single species tank where they won’t be tempted to eat other creatures.

Another tactic is to give them enough space. There are a number of aquarium species, Whisker Shrimp included, that only get really aggressive when they feel threatened or crowded–the aggression is an expression of territorialism.

If you give them more space, they are likely to be calmer.

You could also make sure they are full, making them less likely to search the tank for live bait.

This voracious appetite does work in your favor as they are excellent tank cleaners.

They also have the habit of hiding in the leaves of plants in your aquarium, where they can be quite evasive. I recommend not planting too heavily so that you can keep an eye on your Whisker Shrimp.

Whisker Shrimp will really dazzle you with its appearance. Being able to see through their greyish translucence to their insides is just plain wild. These crustaceans reach a full size of approximately 2 inches (5 cm).

Although they have some similarities with Ghost Shrimp, they are longer and wider than the Ghosts, and are missing the orange bands that distinguish Ghost Shrimp. Additionally, the Whisker Shrimp has longer feelers.

The Whisker Shrimp has a greyish translucent body, tail, and torso. They also have 7 to 9 dorsal teeth and 5 to 8 ventral teeth that protrude from their rostrum, which is one of the features that allow it to attack so aggressively.

Differentiating between males and females 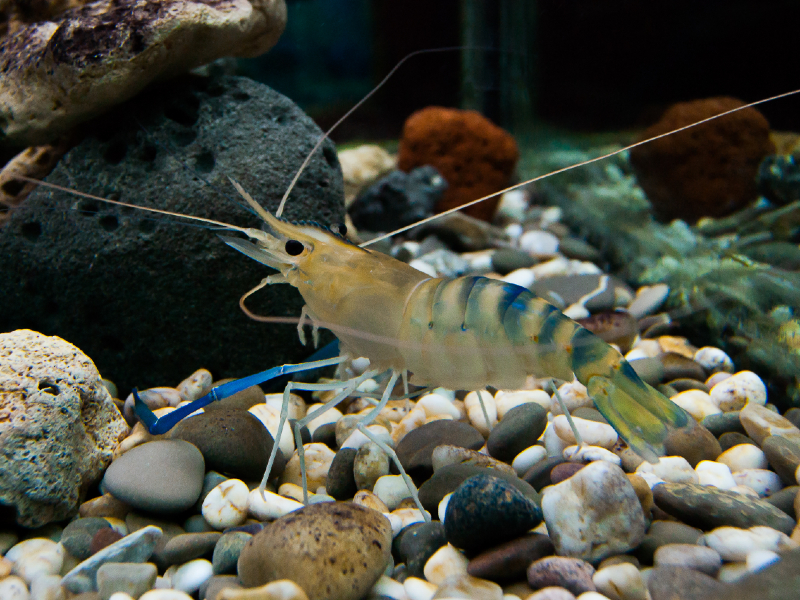 As long as you keep impeccable water conditions, Whisker Shrimp are pretty easy to care for. Since Whisker Shrimp live at the bottom of the aquarium, you need not be concerned with how floating plants or upper tank concerns will affect them.

You don’t even have to worry about substrate–they are happy with sand, gravel, or aquarium soil. You can provide moderate planting, but keep in mind that they don’t like to feel crowded, so don’t overdo the plants. Additionally, if you plant heavily, they will likely hide in the plants and you won’t be able to enjoy their company as much.

They do not have any special lighting requirements; you can add a filter to keep the water clean; just make sure to cover it with a screen so that your Whisker Shrimp do not get sucked up into the filter.

They appreciate plentiful space, so avoid putting them in a tank with large bottom feeders such as catfish, loaches, and plecos, who will take over most of the real estate at the bottom of the tank and might just eat your Whisker Shrimp.

All shrimp are particularly in need of pristine water conditions, so it’s important to clean the tank regularly, test frequently, and perform partial water changes. Dirty water and water with nitrates, nitrites, and ammonia will endanger the well-being of Whisker Shrimp.

They are even sensitive to temperature changes and prefer a range that matches their natural environment.

The optimal parameters to ensure a close match to their habitat in the wild are:

When caring for other aquarium residents such as plants or fish, be mindful of how what you’re giving them may negatively affect your Whisker Shrimp, who are sensitive to water additives, fertilizer, and medications.

Pro-tip: Many fish medications contain copper, which is toxic to shrimp. If you have to treat fish for ich or some other disease, treat them in a separate tank or buy a version of the medication that does not contain copper.

I’ve seen some folks recommend a 5-gallon minimum tank size, but unless you’re only housing Whisker Shrimp, I would recommend a tank of at least 10 gallons. The more space Whisker Shrimp have, the less likely they’ll bother other species.

In fact if you can accommodate a 20-gallon tank, you increase your chances of a happy community tank where Whisker Shrimp can claim their own territory and leave other fish to live in peace.

Whisker Shrimp are aggressive towards small fish and other shrimp species, and sometimes snails. Yet they are also at risk from fish that are larger and more aggressive.

If you’re not planning a dedicated tank, your best bet is to choose a top and middle tank fish that won’t bother the Whisker Shrimp at the bottom or be bothered by them.

And, as I mentioned before, it’s possible that you can reduce their aggression by keeping them full and satisfied, as well as giving them space.

In addition to consuming small live fish and cannibalizing other shrimp, Whisker Shrimp are omnivores and scavengers. They will eat organic matter in your tank; in this sense, they are great cleaners. They’ll also eat prepared foods. They are big fans of Marino moss balls, but they will also eat flake food; prepared shrimp food, including the sinking sticks; crab and lobster bites; and vegetables such as cucumbers and spinach.

Whisker Shrimp are extremely aggressive eaters and if they are not satisfied, they will turn to the live specimens in your tank. On the other side of the spectrum, you want to make sure you’re not overfeeding them, as excess food will rot in your tank and compromise the water quality. Also check water parameters regularly. All shrimp, including Whisker Shrimp, are sensitive to high ammonia, nitrite, and nitrate levels, and can even be affected by fluctuations in temperature.

If you’re looking for baby Whisker Shrimp, it is possible to breed them. It’s not an easy task, however, and involves specific water conditions and a separate tank. If you don’t yet have experience in breeding, you might want to try with another species first.

Your dedicated breeding tank should be between 65 and 82 °F (18.3 and 27.8 °C). You can place one male and 1 or 2 females in the breeding tank, remembering that the females are a little larger than the males.

The female will produce eggs when the temperature is conducive and carry them on her swimmerets, ready to be fertilized by the males. The males are capable of fertilizing the eggs of 2 females.

Once the eggs are fertilized, the males and females should be separated. The Whisker Shrimp eggs will hatch in approximately 3 weeks.

Baby Whisker Shrimp have a diet consisting of plant and animal matter.

Are Whisker Shrimp Suitable for your Aquarium?

Whisker Shrimp are some of the coolest visual additions you could add to your home aquarium. With their semi-transparent sheen, they are difficult to ignore, and I guarantee that Whisker Shrimp will not bore you.

The one drawback to these transparent crustaceans is their proclivity for aggression. That is surely a consideration; one has to be mindful of each aquarium inhabitant. You don’t want to risk the lives of any fish or shrimp that might be at risk with the addition of a single Whisker Shrimp or a group.

We have discussed ways of decreasing the outward show of aggressive behavior, such as making sure they have enough to eat and preventing overcrowding. In the end, each hobbyist has to weigh the benefits and risks of Whisker Shrimp adoption.

What do you think about adding these aggressive little shrimp to your home aquarium? I’d love to hear your thoughts about Whisker Shrimp in the comments section.

May 31, 2022 Robert
About Robert 468 Articles
Robert Woods is the creator of FishKeeping World, a third-generation fish keeper, and a graduate in animal welfare and behavior. He is also a proud member of the Association of Zoos and Aquariums, the Marine Aquarium Societies of North America, and the Nature Conservancy.