If you want to own a large but peaceful fish that is most active at night, you might want to consider the vampire pleco.

The vampire pleco is a carnivore and a member of the pleco family. The vampire pleco has a hearty appetite and prefers live or frozen food, but in captivity, its diet can be supplemented with flakes and pellets. Vampire plecos gravitate to rapids in their natural habitat and need a strong current and high oxygen levels in a home tank.

In this article, you will read about the vampire pleco’s optimal diet and tank conditions, how to breed it, and much more.

The vampire pleco is a peaceful freshwater fish that spends most of its time near the bottom of the tank. This fish is also known by the names Galaxy Pleco and Tusken Pleco.

In the wild, Vampire Pleco lives in rapids, so in aquariums, they need high levels of oxygen and a strong current. These fish prefer sandy and silty substrates.

This is a fish that needs lots of space, and plenty of places to hide.

Their scientific name is Leporacanthicus Galaxias and they are part of the Loricariidae family.

Vampire Pleco is expensive fish, costing between $60 and $100. Prices can jump much higher if a fish is very large and beautiful.

Vampire Plecos are peaceful fish that keep to the bottom of the tank. If the tank gets too crowded they may demonstrate aggressive behavior in a struggle for territory.

Vampire Plecos are nocturnal fish, and can be energetic, but only at night. So if you want to see this fish in action, you will have to stay up past your bedtime.

The Vampire Pleco has a shiny black or gray body, covered with bright yellow or white spots.

It has a hard head and a long tail, with a flat body. As they get older, female Vampire Plecos grow rounder than the males.

The dorsal and caudal fins on Vampire Plecos are large in proportion to their bodies. The upright dorsal fin comes in handy if a Vampire Pleco needs to intimidate a predator. 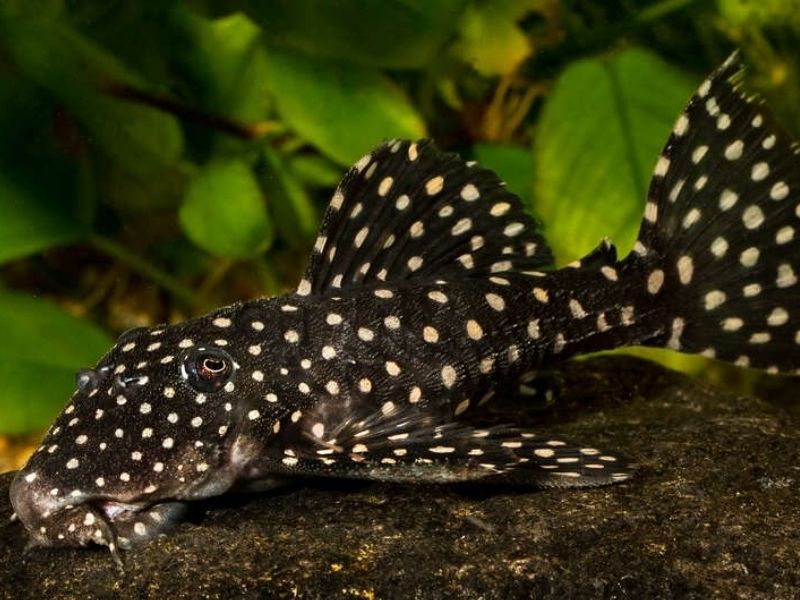 A Vampire Pleco’s natural habitat is in the freshwater rivers and streams of Brazil, and you should try to reproduce in your aquarium the conditions it is accustomed to.

Vampire Plecos need plenty of options for hiding, in the form of plants, caves, and stone formations.

The acid level of the water must be kept to a minimum, and the temperature should be maintained at 72-80°F (22-26C°). This fish is most comfortable in 78°F water.

Vampire Pleco prefers strong currents, so add one or two powerheads to your aquarium. In addition, install one or more Bio-Wheel filters to keep ammonia and nitrate levels to a minimum.

Finally, the pH level of the water should be about 6.5.

It takes about five years for a Vampire Pleco to reach its full length of ten inches. Therefore, when you first buy this fish, you can make do with a 30 – 50 gallon tank.

As your Vampire Plecos continue to grow, be prepared to get a larger tank – especially if you own two or more of these fish. Anywhere between 100 and 200 gallons is the ideal size.

Newly hatched fry can be kept in a 30-gallon tank until they reach a length of three inches.

Vampire Pleco is peaceful fish and rarely attacks other fish, but they need a lot of space to swim. Their tank mates should be smaller and non-aggressive.

Vampire Pleco needs one meal a day. They are happy to eat almost anything and can feed snails, prawns, and shrimp. Both live and frozen brine shrimp are favorite foods. They will also accept manufactured flakes, pellets, and sinking catfish wafers. A good staple to always have on hand is bloodworms.

When there is not enough food available, the Vampire Pleco will consume large amounts of algae. Algae is not good for the health of this fish, so try to keep your tank algae-free.

Vampire Pleco is quite easy to care for. As long as you provide them with a healthy, varied diet and maintain optimal tank conditions, they can live for five years or more in captivity.

The Vampire Pleco has sharp spines on its body which can hurt you if you grab this fish with your bare hands. If you ever need to remove a Vampire Pleco from the aquarium, use a finely woven, soft net to gently lift them out of the water.

To encourage your Vampire Plecos to breed, set up a special tank just for that purpose. The water temperature should be between 72℉ and 78℉, and the current should be slow-moving. Aim a powerhead towards the designated mating area, to create raised oxygen levels in that part of the tank.

Vampire Plecos are private fish and will breed in the caves and other hiding places near the bottom of the tank. After mating, the eggs should hatch in 5 – 7 days. Once the fry hatch, return the adult Vampire Plecos to the main tank. Keep the fry in what is now the “nursery tank”.

The fry will initially get all the nutrition they need from the egg sacs, but a few days later they will show interest in other food. You can feed them baby brine shrimp and crushed flakes as first foods.

Are Vampire Pleco Suitable for Your Aquarium?

The Vampire Pleco is a good tank mate with other community fish and is easy to feed. As long as you provide enough hiding places at the bottom of your aquarium, and as long as there is a good source of oxygen in the water, Vampire Plecos are suitable fish for your collection. 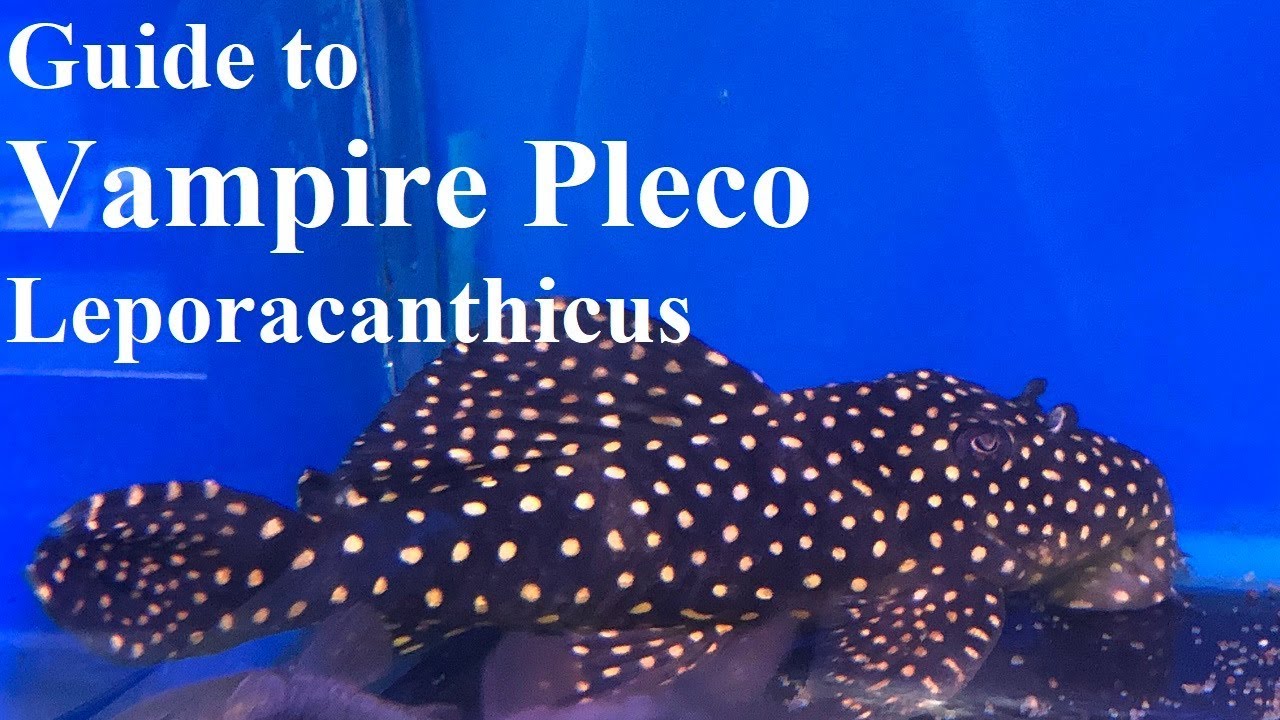 If you have room to keep a large aquarium, and the ability to maintain it, Vampire Pleco are a very eye-catching addition to the other fish you add to the tank.

Feeding Vampire Pleco is easy if you provide them with a wide variety of live and frozen foods. This omnivore fish is not picky, but don’t let that trait get you into a habit of feeding it the same food day after day.

It is exciting to breed Vampire Pleco, because if you succeed you will find a large number of tiny polka-dot fish swimming around the breeding tank absolutely adorable.

In a large enough tank, with well-monitored tank conditions and a healthy diet, Vampire Pleco can live for up to 10 years and grow to a length of up to 10 inches.

Are Vampire Pleco your favorite Catfish species? Let us know in the comments below…

March 23, 2022 Robert
About Robert 468 Articles
Robert Woods is the creator of FishKeeping World, a third-generation fish keeper, and a graduate in animal welfare and behavior. He is also a proud member of the Association of Zoos and Aquariums, the Marine Aquarium Societies of North America, and the Nature Conservancy.