The Torch coral is what is known as an LPS, or large polyp stony coral. It is an interesting-looking coral, with long, thick polyps that emerge from a base of calcified stone.

It is called a Torch Coral because of its torch-like appearance as water flows over it. When placed fairly low down in the tank, its long, fleshy fingers can easily stretch out and move around, providing an eye-catching spectacle.

In this article, you will be able to find out everything that you need to know about caring for your Torch Coral. The Torch Coral is a large polyp stony coral or LPS coral. These corals usually have a hard, stone-like exterior. They have many long polyps that extend and move around, according to the flow of the water current.

The Torch Coral is also known by the names Pom-Pom Coral or Trumpet Coral. Their scientific name is Euphyllia glabrescens.

The Torch Coral is part of the family of Caryophyllidae. It is native to certain areas in the Indo-Pacific region.

The Torch Coral will be a great addition to your saltwater aquarium, as it does not require a high level of care. It can live quite happily in numerous different environments, with a wide range of water conditions.

The Torch Coral is highly adaptable and will do well in both murky and clear water conditions. The range of light that it needs is also broad, making it ideal for beginners who are just starting out on their hobby of keeping an aquarium at home.

With a particularly long lifespan, you can possibly even expect your Torch Coral to outlive you, as they have been known to live for as long as 75 years.

While this is a highly popular coral, and it is readily available from most aquarium supply stores, it is not cheap. You can expect to pay upwards of $100 dollars for a healthy Torch Coral.

It is worth buying from a reputable store or supplier, to ensure that your Torch Coral is healthy. It is possible to get seriously diseased Torch Corals, so always check that you are buying a healthy coral, in order to avoid introducing diseases into your tank, which could potentially infect its other inhabitants. One might wonder how we can talk about the ‘behavior’ of Torch Coral when it is not actually a fish. However, Torch Coral has very clear characteristics, making it appropriate to refer to its ‘behavior’.

The Torch Coral is extremely active. It is highly mobile and moves around in the tank according to the prevalent conditions. If anything significant should change in the tank, you can expect the Torch Coral to react and respond to these changes accordingly.

Torch Corals are not swimmers, as such. However, their movement enables them to hunt and find their own food in the tank. They are able to catch their prey by stinging, allowing them to gather food when they need it.

The Torch Coral is an aggressive species, protecting its territory by killing any other corals that try to invade its space.

The Torch Coral has a distinctive shape, resembling that of a torch. The base is usually solid and is made up of a skeleton that has usually calcified.

The polyps emerge from this skeletal base and are long, fleshy, and flowing. They have rounded tips and can be seen at all times of the day.

The polyps vary in color and can be anything from pink to green to brown, and even sometimes have a beautiful golden hue.

The green color is most obvious when seen under actinic light. This is light that can cause reactions in the chemical components, because of its ultra-violet content.

The Torch Coral varies in size. The smallest varieties are tiny, at only about ½ an inch to an inch long, but larger specimens can also be found, up to between 4 and 5 inches long.

The Torch Coral usually does well when it is positioned towards the bottom of the tank. It needs a lot of room directly above it, to prevent it from sweeping upwards and stinging other occupants of the tank.

The ideal water parameters for the Torch Coral are no different from the usual reef aquarium water parameters. The most important aspects to consider in the tank conditions are the temperature, pH level, water flow, lighting, and chemical elements.

The temperature should be kept at a steady 78° Fahrenheit. If it is either too hot or too cold, the Torch Coral will not survive.

It needs a gravity level of 1.025 in order to thrive. This will keep it growing at a healthy rate. The pH of the water should be kept at about 8.2. If it is too acidic or too alkaline, the Torch Coral can suffer serious side effects.

Corals need bicarbonate in order to grow. Bicarbonate production depends on the alkalinity levels in the water. Therefore it is important to ensure that the pH level is correct.

The calcium level in the water is crucial for the healthy maintenance of your Torch Coral. It is well-known that calcium is essential for healthy bone growth in humans and animals.

While Torch Coral is neither human nor animal, it is made up of a bony skeleton that depends upon sufficient calcium for its growth.  The ideal calcium level of the water should be 400 ppm.

When keeping Torch Coral in your aquarium, attention needs to be given to the water flow. It should be maintained at a moderate level, with no dramatic or sudden changes.

If the water flow is too rapid, or the current is too strong, the long polyps will be torn and damaged as the current forces its way through them. A moderate water flow will ensure a gentle movement of the polyps as they make their way around the tank.

The Torch Coral does not like intensely bright light. For this reason, too, it is best to position it lower down in the tank, where the lighting is more moderate. Very strong, bright light may cause the polyps to retract in order to try to move away from the light. This will affect the growth of Torch Coral. The Torch Coral is a fairly aggressive species, and therefore it needs quite a lot of space. The long polyps tend to sway back and forth, almost as if they are being blown in a gentle breeze.

The minimum tank size for a healthy Torch Coral would be 50 gallons. This will give the polyps sufficient room to spread out and allow them enough space to move freely, without harming any other occupants of the tank.

The Torch Coral can have aggressive tendencies, so it is wise to be cautious about what to place in the tank with it. It can potentially be extremely destructive. It has a vicious sting, and will not hesitate to use this sting if it thinks its territory is being invaded.

When searching for compatible tank mates, the Torch Coral can be paired with most saltwater fish that are reef safe, as long as they are not the type to devour your coral.

It is not recommended to include other coral varieties in the same tank as Torch Coral, as the Torch Coral will see them as aliens and try to eliminate them. Their polyps are long and far-reaching, with a sting in the tip.

They will use their sting unhesitatingly if they feel threatened. However, they will not usually attack other Torch Corals, so if you want to make your tank look fuller, you can include more than one Torch Coral

The Torch Coral is carnivorous, so it will enjoy any small pieces of meat, or even other fish, such as bits of shrimp.

Although the Torch Coral will feed off any meat that it is offered, it is not actually necessary to feed it. It has the ability to be entirely self-sufficient.

The Torch Coral is a photosynthetic species. There are certain other organisms, known as zooxanthellae, that exist within the tissue of the Torch Coral. These organisms undergo photosynthesis, creating sugar from the surrounding light.

However, despite being able to provide themselves with food and sustain themselves, the Torch Coral will grow more quickly and will thrive if it is fed a meaty diet. A good addition to Torch Coral’s diet is a weekly helping of microplankton. 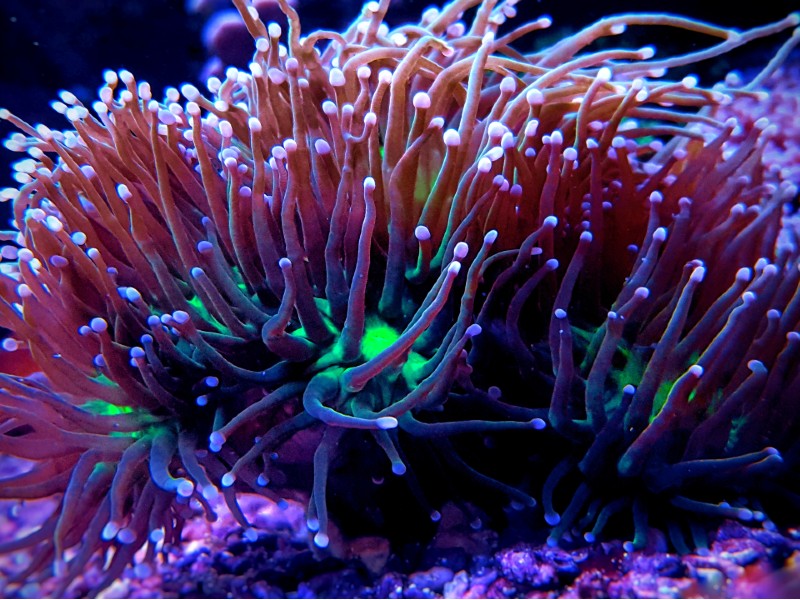 The Torch Coral is not a difficult coral to maintain. It does not require intensive attention, as long as it has the correct water parameters, a big enough tank, and adequate lighting.

It will do well in actinic light, which causes certain chemical reactions due to the ultra-violet elements in the light.

As with all water creatures, the Torch Coral needs a clean aquarium. It is advisable to clean the tank regularly, to prevent the build-up of harmful organisms like algae.

Check that the mineral levels in the water are steady and balanced. The water should have an adequate supply of magnesium, calcium, strontium, and trace elements.

Propagating coral is also known as ‘fragging’. This term is a slang expression that comes from the word ‘fragment’.

The Torch Coral has the ability to self-propagate by splitting into fragments and forming new heads of coral.

If you want to propagate your Torch Coral, you will achieve the best results by removing a branch, using a sharp pair of shears. This should then be attached to a new surface, either with special glue or by tying it up with a fishing line.

It will soon start growing, and a new Torch Coral will develop from this branch.

Are Torch Corals Suitable For Your Aquarium?

While the Torch Coral is not terribly difficult to maintain, it does have certain needs. Provided your saltwater aquarium has enough space, and there are no other fish in it that would attack your Torch Coral and try to eat it, there is no reason why you should not put a Torch Coral in your aquarium.

The most important thing to remember is that the Torch Coral needs a lot of space for its polyps to wave around in the tank. Provided it can do this, it should thrive in your aquarium and live happily for many years. April 11, 2022 Robert
About Robert 468 Articles
Robert Woods is the creator of FishKeeping World, a third-generation fish keeper, and a graduate in animal welfare and behavior. He is also a proud member of the Association of Zoos and Aquariums, the Marine Aquarium Societies of North America, and the Nature Conservancy.