With their intense blue and orange hue, these small angelfish really stand out in a community saltwater tank. Great for a FOWLR (Fish Only with Live Rock) tank, Pygmy Angelfish can also be used in reef tanks (with caution–they are not completely reef-friendly but also not 100 percent contraindicated.

Like many of the semi-aggressive fish I write about, aggression can be somewhat controlled by reducing threats and stress, but always take care when adding them to a community tank.

In this guide, I’ll cover proper care for Pygmy Angelfish, including some information about their background, how to manage their aggressive nature, set up the best habitat and diet. Pygmy Angelfish, scientific name Centropyge argiare, are native to a large swath of ocean, from the Gulf of Mexico and the Western Atlantic, and along the Bahamas, the Caribbean, Florida, and French Guiana.

Recognizable by their vibrant sapphire body and orange highlights, they were first described in 1951 by Woods and Kanazawa. Because they spawn in captivity, hobbyists are able to get them for their home communities without threatening coral reefs.

They are pretty skittish due to their small size, so they appreciate hiding places like caves and driftwood. In the wild, they are seen at a wide range of depths, from 16 to 148 feet (5 to 45 m).

Pygmy Angelfish are feisty creatures that will scuffle with other species and each other. I recommend no more than one male per tank, as multiple males will likely result in increased territorialism. However, achieving this goal can be tough since it’s nearly impossible to tell which angelfish are female and which are male.

Aggression can really increase during mating time, so if you are planning on breeding them, get ready for a battle.

One way that you can reduce aggression among Cherub Angelfish (admittedly, their name is a misnomer) is by providing extensive space and generous caves and hiding spaces. If each angelfish is able to lay claim to their own territory, their likelihood of aggression will decrease.

This extra space will also help reduce aggression with other species, as feeling threatened is one reason Pygmy Angelfish lash out–they are only 3 inches (5 cm), after all, and could easily serve as 3rd breakfast for a larger, more aggressive fish.

All that being said, I would be remiss if I did not mention that when Pygmy Angelfish do exhibit aggression, they will fight to the death, whether that means killing another species or one of their own or even facing their own death.

Pygmy Angelfish are smart and aware of outside-the-tank happenings. You’ll notice that they are paying attention to you as you approach the tank, and you might even see them raise their dorsal fin, ready for a throwdown.

These are active fish that will dart around the tank, showing off their might and brilliant coloration. 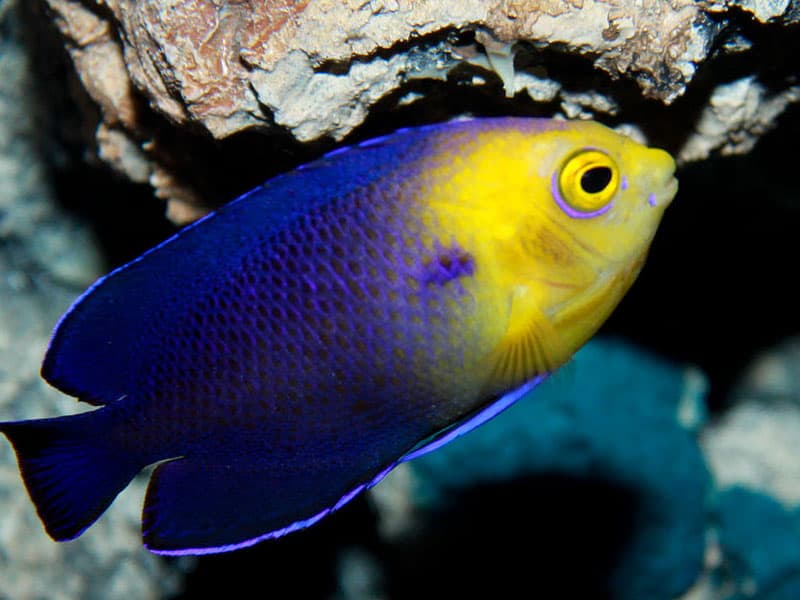 I’ve already detailed the sapphire blue and orange color pattern of the Pygmy Angelfish; they also have unique blue rings around the eye area.

Like other dwarf angelfish, Cherub Angelfish have elongated bodies and rounded fins.

They look like mini versions of larger angelfish, making them even more fun to watch them darting around the tank. And because of their smaller size, you can enjoy the look of the angelfish without the real estate commitment of a 200-plus gallon tank.

If the dominant male dies or is killed, the next in the pecking order will turn into a male. You can see why there is not really a good way to determine sex from physical characteristics.

Although the males in some fish species exhibit more intense coloration than the females, there is no difference in color between female and male Cherub Angelfish.

Because they often feel stressed and threatened, you want to make sure to offer them plenty of hiding places, including caves and live rocks.

A FOWLR setup is ideal for them–there is no coral to kill and they will eat the algae that collect on the live rock. The term live rock can be confusing if you haven’t heard it before. Live rock is not actually alive but comes from the skeletons of previously alive coral.

FOWLR aquascapes are great for saltwater fish that are not reef safe. Pygmy Angelfish are not reef-unfriendly, but they are also not fully reef-friendly. You could put them in a reef aquascape, but they will nip at coral.

Pygmy Angelfish are middle to bottom dwellers and will settle around the live rock if you provide it.

Pygmy Angelfish are not super picky about their water chemistry, but you should ensure a clean tank. Do 25 or 30% partial water changes every month, or 15% every other week. Perform regular water changes to ensure low nitrate and ammonia levels.

You need at least a 55-gallon tank (208 liters) for Pygmy Angelfish. If you’re trying to house multiples, go larger. They are more aggressive when they don’t have copious amounts of space.

Avoid peaceful, calm, small fish with Pygmy Angelfish. The former will just get bullied and likely destroyed. They shouldn’t bother large invertebrates but will eat smaller invertebrates. They are neither recommended nor prohibited for reef tanks, but if you have a reef aquascape, you should be prepared for Pygmy Angelfish to nibble on corals.

As I’ve mentioned, there is significant infighting among Pygmy Angelfish, particularly between males, so if you can tell the difference between the males and females, limit the number of males to one. If you have more than one, there’s a good chance you’ll end up with one anyway when they get in a fight to the death.

If you’re not breeding them, I’d recommend just having one in a tank to limit the potential bloodbath. If you do keep multiples, make sure they have sufficient space to claim territory.

Pygmy Angelfish are omnivores, so they need a varied diet of protein and greens. They will exist on marine algae for the majority of their nutrition, but they also like prepared angelfish food and frozen meaty proteins like brine shrimp and Mysis shrimp. You can try a nori lettuce clip or spirulina algae.

If you have a FOWLR aquascape, your Pygmy Angelfish will snack on live rocks between their daily feedings.

You should feed them small portions 3 times a day. If you feed too much in one sitting, you will end up with extra food waste, which will compromise the cleanliness of your tank. Feed only what your Pygmy Angelfish can consume in about 3 minutes.

Pygmy Angelfish are susceptible to the same diseases that most saltwater creatures are. Prone to parasitic infections such as marine ich (or ick) and velvet, Pygmy Angelfish should be quarantined and treated immediately if you see white, yellow, or grey spots and/or intensive itching.

Both ich and velvet are super contagious, and when not treated promptly, can be fatal. Choose copper-free versions of the treatment medication.

In addition to parasites, Pygmy Angelfish are, unfortunately, prone to bacterial infections due to their proclivity for fighting. If they spar with other species or other Pygmy Angelfish and are wounded, you will have to watch them for infection.

Of course, bacterial infections can also occur when the skin integrity is compromised by the ich and velvet parasites.

Finally, fungal infections are often secondary effects of parasitic infections. The best prevention for all these diseases is a clean tank. Check water regularly and perform partial changes when indicated. And when you witness excessive fighting or bullying, separate the fighters or remove one. If you are up for a dominance battle, you can go ahead and try to breed Pygmy Angelfish. All Pygmy Angelfish available in the aquarium trade are bred in captivity, so it can be done, but not without some infighting. Additionally, raising the larvae can also be challenging.

You’ll remember from an earlier section of this guide that Pygmy Angelfish are protogynous hermaphrodites; that is, they are all born female and then the dominant fish turns into a male. If you’re trying to breed, start by putting a larger Pygmy Angelfish with a smaller one, hoping one will take on the male role in a few months. If you choose this option, keep an eye on the smaller fish to make sure they’re safe from the larger ones.

Alternatively, you could put a smaller group of Pygmy Angelfish into your tank and let them fight it out for the male dominance role. Be prepared for a bloody battle. Since Pygmy Angelfish practices harem breeding, this latter method is ideal.

If you’re able to make it past the male/female challenge and the infighting, you’ll likely see fertilized eggs, which are released by the males and females into the water current, so you’ll need a taller tank.

In just under a day, the eggs will hatch and the tiny larvae remain in the yolk sac for 2 or 3 days. This is a time during which you will need to feed them microscopic algae, which is not an easy task.

Pro tip: If the aggression is really intense between two of the Pygmy Angelfish, chances are good that you actually have two males.

Are Pygmy Angelfish Suitable for your Aquarium?

Pygmy Angelfish are one of the most striking and intensely colored saltwater fish that you’ll encounter. If you’re up to the challenge of mitigating their aggressive tendencies, Pygmy Angelfish could be a good fit for your saltwater community.

It is hard to resist their beautiful colors, though.

Do you think Pygmy Angelfish are too aggressive for a community aquarium? I’d love to hear about your experiences with them.

December 17, 2017 Robert
About Robert 468 Articles
Robert Woods is the creator of FishKeeping World, a third-generation fish keeper, and a graduate in animal welfare and behavior. He is also a proud member of the Association of Zoos and Aquariums, the Marine Aquarium Societies of North America, and the Nature Conservancy.