The powder blue gourami is a small freshwater fish that is part of the gourami family. It is found in the rivers of India, Pakistan, and Korea, among others. It belongs to the family Osphronemidae.

The powder blue gourami is one of a number of species of dwarf gourami. It is extremely popular among home aquarists, both because of its attractive, bright color, and its small size. This makes it the perfect little fish for a small home aquarium. The powder blue gourami’s scientific name is the Trichogaster Lalius. It is a member of the Osphronemidae family of freshwater fish, also sometimes referred to as the Polyacanthidae family.

This fish’s original habitat is in the slow-moving rivers and streams of certain parts of Asia. They are used to thick vegetation and dense overgrowth. Therefore, they will enjoy having lots of plants in their tank.

The powder blue gourami is readily available and can be found in most pet stores that sell fish and aquarium supplies. It is quite affordable, with prices starting at about $6. Many stores offer specials for multiple purchases, for example, 3 for $12.

The powder blue gourami is a pretty fish with an eye-catching appearance. Its vibrant blue color makes it stand out from other fish in its tank.

Some powder blue gouramis are completely blue, with their entire exhibiting a consistent shade, while others have a kind of built-in pattern in varying shades and hues of blue. They have an iridescent sheen, making it look as though they have been dusted with a sprinkling of powder. Hence their name, powder blue gourami.

The average size of a powder blue gourami is about five inches, with the female being slightly fuller-figured than the male. The male is usually longer and thinner, while the female has a more rounded belly with a thicker girth.

When the female is ready to breed, her belly becomes even fuller and more rounded, giving her a swollen, bloated look. The male’s color becomes even more shiny and vibrant at breeding time.

The easiest way to differentiate between the two sexes is by examining the dorsal fin. The female powder blue gourami has a shorter, more rounded top fin than the male. His tends to be more pointed and slightly longer and thinner than hers. This difference is only easily noticeable in fully grown adult fish.

There are numerous sub-species of gouramis, such as the chocolate gourami, the dwarf gourami, the moonlight gourami, and the pearl gourami, among others. These are all similar in appearance, but some are a different color or look a little different in other ways, such as how shiny they are.

The powder blue gourami is generally a peaceful fish that gets on well with most other small fish with a calm temperament. However, the male does sometimes become territorial towards other males, and can often display aggressive tendencies towards them.

The male may try to nip and bite if he perceives that his space is under threat. Therefore it is better to have only one male powder blue gourami in your tank. The female is more passive and is unlikely to become belligerent towards her tankmates.

Powder blue gouramis are used to the slow-moving waters of the rivers, streams, and swamps of their natural habitat in Southern Asia. For this reason, they are slow swimmers and will enjoy a tank with a gentle current.

Do not place bigger, fast-swimming fish in the same tank as your powder blue gouramis. They will not feel comfortable and will think that they are in danger. As a result, they may fail to thrive.

They prefer swimming around in the middle to upper sections of their tank. If your powder blue gouramis are hovering lethargically around the bottom of the tank, it is highly likely that they are not well.

Powder blue gouramis do not like bright lights in their tank. In their natural habitat, the river water is murky and filled with vegetation. Therefore, it is fairly dark beneath the water’s surface. They prefer tank conditions that mimic this situation.

These fish like to sleep in little crevices or caves, where they can hide and rest undisturbed for an hour or two at a time. 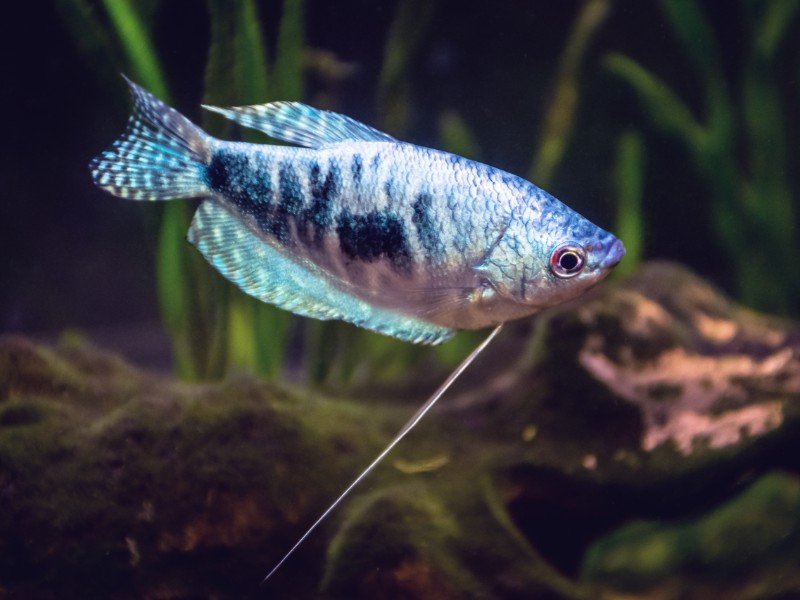 The powder blue gourami is easy to care for. As long as its tank is set up correctly, and its dietary needs are catered for, it should thrive in a home aquarium.

The powder blue gourami originally comes from the rivers and streams of Southern Asia. Water conditions in these rivers are murky and thick with vegetation. This fish needs similar conditions in its tank.

The powder blue gourami is an omnivore. Its diet should contain a balance between meat- and plant-based food.

Unfortunately, the powder blue gourami is highly prone to a disease known as DGD, or dwarf gourami disease. This is a viral infection and is usually fatal.

In the rivers and streams of Southern Asia, the natural habitat of the powder blue gouramis, the waters are thick with vegetation. As a result, they are slow-moving and heavy. These fish need a similar environment in their tank.

The aquarium should be set up with a lot of plants, rocks, and pieces of driftwood. The powder blue gourami is a shy little fish that loves to hide away from its tank mates in small crevices. It needs as many hiding places as possible.

These fish are not used to bright light. You should have a tank light that can be kept on a low setting, to provide only dim lighting in the aquarium. You should not place your tank in a position where it will be in direct sunlight for a large part of the day.

It is essential to clean the tank regularly in order to ensure that powder blue gouramis remain healthy. The gravel at the bottom of the tank should be siphoned regularly, in order to vacuum up any debris and remaining food particles.

The water should be replaced by removing approximately 25% of the water and replacing it with clean water, at least once every two weeks. This will prevent a build-up of bacteria that can cause diseases in fish. It will also help to prevent an overgrowth of algae in the tank.

Gouramis are used to the soft, slightly acidic water of their natural habitat. You should try to replicate this as far as possible in the tank. Water parameters for powder blue gouramis should be arranged according to the following guide.

The tank size depends largely on the number of fish you intend to keep in the tank. If you only want to keep a single fish, a 5-gallon tank will be big enough. However, for 2 or 3 fish you will need a 10-gallon tank, and for every fish thereafter, you should increase the tank size by five gallons.

The tank needs a lot of plants, rocks, and driftwood, in order to recreate the natural environment of the powder blue gourami. It needs lots of little hiding places. A sandy substrate with some gravel will help the fish to feel comfortable and at home.

Powder blue gouramis are used to slow-moving water. The pump should not be too strong and it should create only a very mild and gentle current in the tank.

The powder blue gourami will be compatible with many other small freshwater fish that have a calm temperament. While this is usually a peaceful fish, the male does occasionally display aggressive tendencies towards other males of the same species.

While it is fine to pair a male powder blue gourami with a few females of the same species, you should avoid placing two males in the same tank. They are likely to fight with each other over dominance in the tank.

Some fish that will make good tank mates for the powder blue gourami are:

Most of these are fish that generally prefer swimming around the bottom of the tank, while the powder blue gourami likes to stay in the middle or hover around the top, where it can occasionally breathe in air from above the surface, through its labyrinth. The powder blue gourami is an omnivore. In its natural habitat, it feeds off small live creatures and larvae and also nibbles on the plants around it.

While this fish needs meaty foods, it will also enjoy eating plant-based foods. You should feed your gouramis either live or frozen bloodworms and shrimps. You can also feed dried flaked food or granules. These are useful to supplement the meat.

Take care not to overfeed. Powder blue gouramis only need a tiny portion of food, twice a day. Overfeeding can be dangerous and will make your fish ill, or possibly even kill them.

Dwarf gourami disease, or DGD, is a viral condition that often strikes and can have disastrous consequences for your powder blue gourami. Unfortunately, there is not much that can be done to save the fish once it has the virus.

DGD presents as a change in color, usually darkening in certain areas, and the edges of the fins will start to die. As soon as you notice this, you should remove the fish from a communal tank, and place it in isolation, in order to prevent the virus from spreading to the remaining fish.

When the powder blue gourami is ready to breed, it creates bubble nests in the plants in its tank. In order to encourage breeding, follow these steps:

The male fish will approach the female and she will lay her eggs. He will then place them in the bubble nest, and cover them with more bubbles. He will guard them until they hatch, which takes 12–24 hours.

The young fry will emerge after 2–13 days, after which the adult fish should be removed from the tank. The fry should be fed minuscule portions of food for the first week, and you can then gradually increase the amount.

Should You Get A Powder Blue Gourami For Your Aquarium?

The powder blue gourami is an attractive fish that is simple to care for. It has a striking appearance, with its beautiful shades of blue.

These are mostly peaceful fish that will do well in a community tank with other small freshwater fish. If you want to add powder blue gouramis to your home aquarium, remember not to place more than one male in the tank.

If you love the color blue, and you are a keen aquarist, the powder blue gourami would be a perfect addition to your tank.